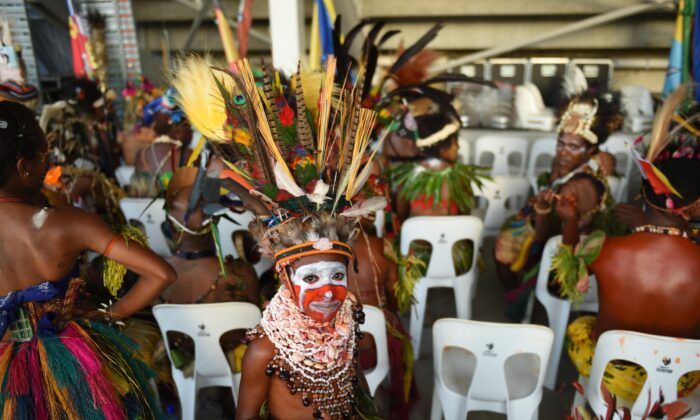 A boy in traditional dress waits to participate at an event at the sports stadium to mark 40 years of independence in Port Moresby, Papua New Guinea, on Sept. 16, 2015. It was on this day in 1975 that Papua New Guinea gained independence from Australia. (AAP Image/Mick Tsikas)
Asia & Pacific

Election observers in Papua New Guinea (PNG) are calling for an urgent review of the 2022 election after reported incidents of violence and issues leading to a “high numbers of eligible voters” being disenfranchised.

In an Interim Statement on July 25, the chairperson of the Commonwealth Observers Group, former President of Nauru Baron Waqa said election observers were very concerned about increasing levels of violence around the election and the fact a large number of eligible voters—in some cases 50 percent—were missing from the 2022 electoral rolls.

“As observers, it is our responsibility to identify challenges to the inclusiveness, credibility, and transparency of this election. We do this with the aim of supporting and strengthening the electoral process in Papua New Guinea,” Waqa said.

“We are concerned that this could have disenfranchised high numbers of eligible voters.”

He noted that “all relevant stakeholders” should collaborate in “undertaking an urgent review of the 2022 election.”

Waqa noted there was widespread public dissatisfaction with the accuracy of the common roll, as well as concerns around the operating behaviour of the PNG electoral commission.

He said the body was overly centralised, lacked scrutiny from the media, and failed to establish a good relationship with the community after failing to pay bills and allowances from previous elections.

He also noted that the observers had not only heard numerous allegations of bribery involving agents of the electoral candidates’ but witnessed first-hand the “distribution of money and food to voters during the polling period.”

The advice to review the election results comes amid evidence of increasing levels of violence, with Radio New Zealand (RNZ) reporting on July 25 that incidents had erupted in the capital Port Moresby, which saw supporters of rival candidates allegedly attacking each other with bush knives and other weapons outside the country’s main sports stadium. The incidents forced local businesses to close.

Former PNG Prime Minister Peter O’Neill said the way the 2022 general elections were taking place was “shameful” and that it was the worst he had ever seen, reported The National newspaper on July 22.

“Hijacking of boxes, rigging of elections taking place at the polling sites, people not allowed to vote and election officials highly compromised,” O’Neill said. “I am very surprised to see that the level of violence is increasing despite the fact that we have had many elections.”

“We should now be used to elections and accept results, that one has to win and many have to lose after such a challenge. Unfortunately, we are continuing to lose lives, innocent lives. Women and children have been caught in this. The way the general election 2022 is taking place is quite shameful.”

Meanwhile, the Australian government said it was aware of the Interim Statement from Baron Waqa.

“Australia continues to support PNG’s conduct of their national elections,” a spokesperson for DFAT told The Epoch Times in an email. “It is a matter for the PNG government to consider and evaluate the Commonwealth Observer Group’s preliminary findings.”

The support for the PNG government’s commitment to democratic elections comes as Australia, under the centre-left Labor government of Anthony Albanese, pledges ongoing support and engagement in the Pacific as a way to stave off Beijing’s influence in the region.

Former Prime Minister Scott Morrison hinted that PNG had been placed under  “pressure” by Beijing in April to sign a security pact similar to that of the Solomon Islands.

Chinese authorities have also shown interest in the autonomous region of Bougainville in PNG, reportedly offering US$1 billion in infrastructure investment that would come under its Belt and Road Initiative. Bougainville is on course to achieve independence in 2027.