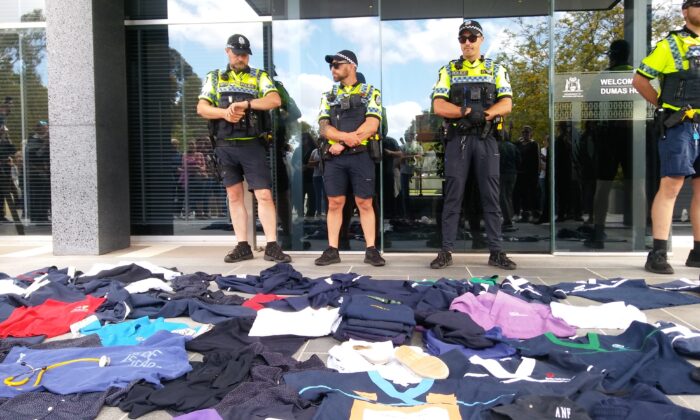 Health staff leave their uniforms in protest over Western Australia's vaccine mandates outside of Dumas House, the residence of WA Premier Mark McGowan, in Perth, Australia on Nov. 1, 2021. All hospital staff must receive their first vaccination by Nov. 1 to keep working, part of sweeping mandates that will require 75 percent of the state's workforce to be vaccinated by January, 2022. (The Epoch Times)
Australia

The Western Australian Labor government has been forced to close down its office in Rockingham, Perth, after staff allegedly received death threats. Premier Mark McGowan also noted some of his staff had also allegedly received threats of sexual assault.

Concerns are growing that the threats result from the state government’s sweeping decision to mandate vaccinations for 75 percent of the workforce, with thousands set to lose their livelihoods.

“There’s been death threats, there’s been threats to rape my staff, there have been people threatening to bomb my office,” WA Premier Mark McGowan told reporters on Nov. 17.

“Someone turned up with an armoured car with a machine gun on the top,” McGowan said.

McGowan urged those involved to cease engaging in dangerous and unlawful activities.

“There is no problem with peaceful protests—they are an important part of our democracy. But personal threats of harm, violence, or death have no place in our society,” McGowan said in a Facebook post.

“To see such a small proportion of the population embark on such a serious campaign of harassment and intimidation is appalling. It has to stop.”

However, while thousands of West Australians have come out to protest the vaccine mandates over the last few months—with nine demonstrations in October alone—none have turned violent.

Many anti-mandate supporters have expressed concern that WA’s rules—which covers over a million workers and require children and teenagers to get the inoculation to meet the state’s 90 percent 12-and-over vaccination target—have led a small handful of individuals to act irrationally.

One midwife—who is one of the thousands of health staff that have declined the vaccine and are now facing the loss of their income—said that almost all of the anti-mandate supporters were parents, health staff, and other workers that had never engaged in violent or harmful behaviour.

But she said that while the mandates had devastated the lives of thousands of individuals and families, some of those had already been mentally vulnerable and were unable to cope with the added stress of losing their jobs.

“So where other people may have enough reserve not to do those things, those people that are already on the edge mentally—there’s not much restraining them. There are no mental health services, and you can’t get help, and these people couldn’t afford to pay for help now that they’ve lost their jobs.”

She said she understood where people were coming from.

“I don’t condone violence, and I would never be violent,” she said.

“[But WA Premier Mark McGowan] has completely destroyed my life.”

Former law reform commissioner and head of law at Sheridan Institute of Higher Education, Augusto Zimmermann, said he completely disagreed with the behaviour of those hurling threats at others.

But Zimmermann, who has spoken at multiple anti-vaccine mandate protests, said McGowan’s action had been the primary driving factor contributing to public outrage.

“I totally object to the behaviour of some particular individuals,” Augusto told The Epoch Times on Nov. 18.

“But I also disagree with the authoritarian behaviour of the premier because he is inciting the masses to become more sensitive to the comments he has been making.”

In a Facebook post, McGowan referred to some of those attending protests in Melbourne as “extremists” and “neo-Nazis,” including those who attempted to place an inflatable doll of Victoria Premier Daniel Andrews through a noose. McGowan had also previously suggested peaceful anti-lockdown, and anti-mandate demonstrators should “grow a brain.”

Some have also expressed concern about the level of McGowan’s power in government after he made himself treasurer and changed the rules around regional voting in the upper house, significantly cutting representation for rural voters.

Currently, any legislation introduced by the McGowan government in the WA parliament will pass almost without exception following an overwhelming victory early in March that saw Labor occupy a significant majority in both the lower and upper house.