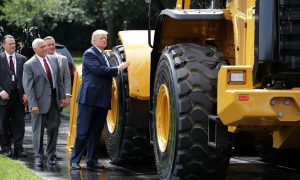 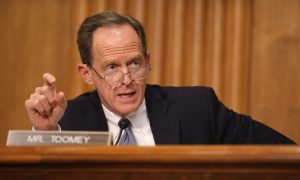 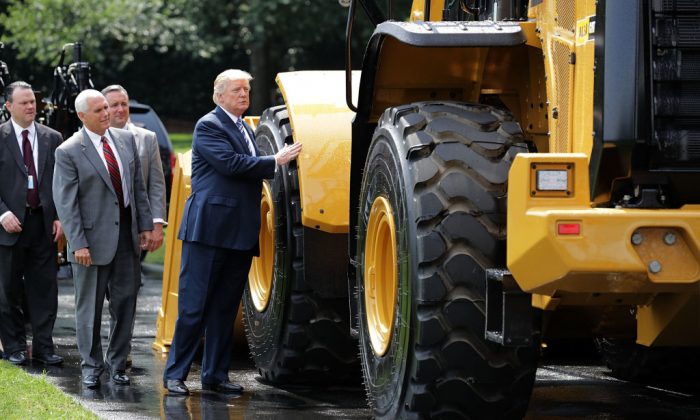 U.S. President Donald Trump touches a wheel loader made by Caterpillar while touring a Made in America product showcase with Vice-President Mike Pence on the South Lawn of the White House in Washington on July 17, 2017 (Chip Somodevilla/Getty Images)
US News

Concerns Over China Bring Fading US Lending Agency Back to Life

WASHINGTON—The U.S. export credit agency that faced a critical survival battle this year secured a long-term extension, becoming one of the big winners in the year-end spending deal.

President Donald Trump signed legislation on Dec. 20 that reauthorized the U.S. Export-Import Bank (Ex-Im) for seven years, the longest extension in the agency’s 85-year history. The reauthorization of the bank was a part of the $1.4 trillion spending package that helped avert a potential government shutdown.

The legislation directs the bank “to focus on the important economic and national security challenges posed by China,” Kimberly Reed, Ex-Im’s president and chairman, said in a statement on Dec. 20.

“I am proud to have the support of President Trump and Congress in this undertaking,” she said.

Ex-Im lost support in 2015 among conservative lawmakers who argued that it provided needless “corporate welfare” and benefited large corporations such as Boeing. They called for an “orderly liquidation” plan of the bank. The bank lost a quorum on its board of directors in 2015 and was unable to approve large transactions for nearly four years.

The credit agency, however, has gained allies in Congress and the Trump administration, amid concerns that U.S. manufacturers are losing business overseas to China. In May, the Senate revived the agency by confirming Trump’s nominees to serve on the bank’s board, allowing it to have the quorum needed to authorize loans of more than $10 million.

The bank’s reauthorization fixes the quorum issue by establishing a temporary board in the absence of the required number of Senate-confirmed board members.

Advocates of Ex-Im have argued that it’s crucial for both economic and national security purposes, and it’s an important tool to compete against China, which has a strong export-finance agency.

China has been expanding its global influence through its “One Belt, One Road” initiative, an ambitious development program spanning almost 70 countries and covering more than two-thirds of the world’s population. And subsidized export financing is a key component of the initiative.

China’s Export-Import Bank alone has provided more than $149 billion in loans to more than 1,800 Belt and Road projects in the last several years.

Trump opposed the credit agency during his presidential campaign a few years ago. In an interview with Bloomberg in 2015, he called the bank “feather bedding” for politicians and a few companies.

As president, however, he changed his mind and declared the bank “a very good thing.” That was triggered by his concerns over China trade.

Ex-Im was established in 1934 by President Franklin D. Roosevelt to serve as the official export credit agency of the country. It provides competitive loans to overseas purchasers of U.S. goods and services.

The bank must be approved periodically by Congress to operate; lawmakers also appropriate funds to the agency to cover administrative and operational costs.

The bank’s objective is to level the global playing field for U.S. exporters as they compete against foreign companies that receive support from their governments. However, the reauthorization of the bank has been a polarizing issue in Congress in recent years.

Peter Navarro, the White House trade adviser, criticized lawmakers in March for creating a “needless conundrum” by refusing to confirm nominees for Ex-Im sent by the administration.

“We are getting hammered—particularly by China, South Korea, and the other countries in the G-7,” he said at the Ex-Im’s annual conference on March 28.

Although the bank benefits large multinational corporations such as Boeing, Caterpillar, and GE, it’s also an important source of credit for U.S. small businesses.

Over 89 percent of Ex-Im’s transactions—more than 2,100—directly supported exports from American small businesses in the fiscal year 2019, according to the bank.

“This is a win for our economy that will allow more American products to be sold around the world and create hundreds of thousands of good-paying jobs,” Sen. Sherrod Brown (D-Ohio) said in a statement on Dec. 19 after the Senate approval of the reauthorization.

The reauthorization bill included provisions that targeted Chinese export subsidies around the globe.

For example, it establishes a new “Program on China and Transformational Exports,” which sets a goal of reserving 20 percent of Ex-Im’s authority to support U.S. businesses that compete directly with exports from China and certain advanced technology exports such as artificial intelligence and 5G.

The bill also requires Ex-Im to consult with the Department of State to evaluate the risk to the national interest of any planned transactions over $25 million if the potential borrower is a Chinese state-owned enterprise.

Another provision in the bill would require the bank to increase its target threshold of small business exports as a percentage of total exports from 25 percent to 30 percent, beginning Jan. 1, 2021.

It also requires the bank to reserve 5 percent of its loans to support renewable energy, energy efficiency, and energy storage technology exports.