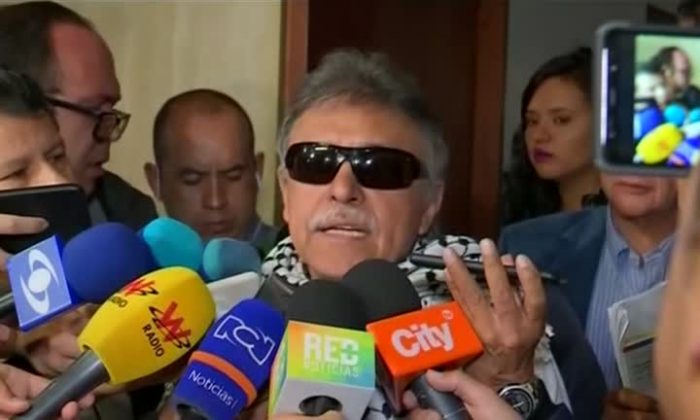 Seuxis Paucias Hernandez, better known by his nom de guerre, Jesus Santrich, is believed to have fled to Venezuela.

He was expected to appear in court in Columbia on July 9 on extradition charges but went missing at some point on June 30, according to Colombia’s National Protection Unit.

Colombian President Ivan Duque told reporters in the central Colombian city of Villavicencio on July 1 that Santrich was “evading Colombian justice” and “mocking” it with his disappearance.

The former Revolutionary Armed Forces of Colombia (FARC) commander is alleged to have tried to send 10 tonnes of cocaine, with an estimated value of $320 million, into the United States and was arrested in Colombia in April 2018. He was released and rearrested twice more in a drawn-out legal saga that’s seen by critics of Colombia’s peace process as symbolic of its inherent injustice.

Santrich was a hardline FARC negotiator in the historic 2016 peace accord that ended a half-century of conflict between the state and the Marxist guerrillas. He was initially jailed on an Interpol arrest warrant and was expected to be extradited before he could take up one of 10 seats in Congress guaranteed to the FARC as part of that agreement.

In May, however, Colombia’s special tribunal for peace—established to investigate war crimes—declared the U.S. evidence insufficient and ordered his release. Minutes later, as the 52-year-old was leaving jail in his wheelchair, he was dramatically re-arrested by public prosecutors on fresh evidence—only for Colombia’s sSupreme Court to later order his release on the grounds that the Supreme Court is the only entity able to prosecute lawmakers in the country’s Congress.

Conservatives have consistently protested the ex-rebel’s presence in Congress and the delay in his extradition despite a video having been leaked to the media in May showing Santrich in a clandestine meeting negotiating the alleged drug deal. They are now are now incensed by his apparent escape.

Santrich was in a state-established reincorporation zone for ex-FARC guerrillas, about 20 miles from the Venezuelan border, when he went missing, according to his bodyguards. While it’s claimed that he left a note announcing he was visiting his son in the city of Valledupar, Columbia, he remains missing and the note hasn’t yet been verified.

Bernardo Hoyos, a radical former priest and local politician in the coastal city of Barranquilla, told local television that Santrich fled to neighboring Venezuela after learning of a plot to assassinate him during a planned visit to the city.

The FARC’s political wing has distanced itself from the disappearance, saying that it had no prior knowledge and that any member who abandons the peace process or engages in activities outside of the law “must accept the consequences.”

Three high-ranking FARC commanders have already abandoned the peace process, along with an estimated 2,300 combatants who now make up armed dissident groups that threaten to undermine the peace process.

Analysts see the latest twist in the Santrich saga as another serious setback.

“If he is in Venezuela, it would be a deadly blow to the credibility of the peace process, and more importantly, it would be hurtful to all the FARC members who are abiding by the process,” said Sergio Guzman, director of Colombia Risk Analysis.

Guzman added that it was possible Santrich saw “no way out” of the “conclusive” evidence provided to the Supreme Court, and that a porous Colombian–Venezuelan border and the FARC’s “ideological affinities” with Venezuela may have motivated his decision to seek shelter there.