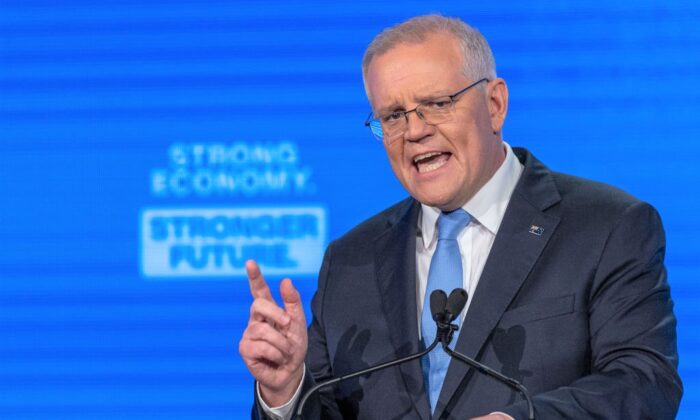 BRISBANE, AUSTRALIA - MAY 15: Australian Prime Minister Scott Morrison speaks to the crowd at the Liberal Party election campaign launch on May 15, 2022 in Brisbane, Australia. The Australian federal election will be held on Saturday 21 May. (Photo by Asanka Ratnayake/Getty Images)
Australia

The incumbent centre-right Coalition government’s recently announced housing policy—that will allow first home buyers to access their superannuation funds—has been criticised by the opposition, financial sector, and unions over concerns it will cause a spike in residential real estate prices.

Yet in early May, one economist told The Epoch Times that the centre-left Labor Party’s policy had similar consequences for the housing market and that both major parties were not looking at longer-term solutions.

The first is that his government will lower the age threshold for Australians nearing retirement who wish to downsize and sell their home—eligible individuals can make a tax-free $300,000 contribution to their superannuation (retirement) fund.

“This will increase the opportunity for people to downsize and increase the supply of family housing stock in the market,” he told attendees.

Further, from Jan 1, 2023, for two—instead of one—years the proceeds from the sale will be free from the pension assets test.

The other policy, targeting younger Australians, will allow individuals to withdraw $50,000—or a total of 40 percent of their superannuation balance—to fund the deposit for their first home purchase.

Morrison called the move a “game-changer” for thousands of Australian families. It was also an opportunity for the centre-right Coalition to distinguish itself sharply from its opposition.

Morrison was referring to the “Help to Buy” program announced by the Australian Labor Party in early May that will see the government assist 10,000 individuals with buying their new home in return for an equity stake of up to 40 percent for the new home, and 30 percent for an existing home.

Once the mortgage is paid off, the homeowner can choose to either buy the stake from the government or sell off the property. There are currently no limits to who can access the scheme, with the Labor Party also emphasising that it is a “trial” program.

The government, however, has been critical of the policy, saying that once housing prices rise—and they inevitably will in many larger and regional cities—the government will benefit while homeowners keep paying off their mortgages.

“We want that to be able to help you get in your own home, so you don’t have to sit on the sidelines and watch house prices rise and run away from you,” Morrison said a day later on 4BC radio.

Meanwhile, the centre-left Australia Labor Party has embraced the downsizing proposal from the government while panning the repurposing of superannuation funds.

“You shouldn’t have to choose between housing today and poverty in old age,” Tanya Plibersek, the Labor Party’s spokesperson for education and women, told the Seven Network on May 16. “We know that this will push up housing prices; we know it’ll mean people have less super to retire on.”

She also said previous Coalition leaders, including John Howard, Peter Costello, and Malcolm Turnbull, had opposed such policies in the past.

The Australian Council of Trade Unions called the policy a “shameless attack” on the superannuation system.

“This is not a housing policy—this is a desperate, last-minute act from a prime minister trying to cling to power,” Michele O’Neil, president of the Council, said in a statement. “The Coalition has had almost a decade to do something about housing affordability and has done nothing.”

The policy could result in a weakening of some superannuation funds, which major union groups operate and draw fees from.

The Financial Services Council called for more balance in the initiative, noting that the downsizing policy affected around 1.3 million households, but the Coalition’s first home buyer policy could see 5.3 million Australians under 35-year-olds buy their first home with their superannuation.

“The government has an obligation to do more to boost supply; otherwise, unleashing superannuation savings on the housing market risks driving prices higher still,” according to Blake Briggs, CEO of the Council.

“But that doesn’t play out the long term benefits of more homeownership, fewer people relying on rent … there are so many factors that play into the housing market,” she told ABC Radio on May 16.

Meanwhile, chief economist at the Centre for Independent Studies, Peter Tulip, has called for longer-term solutions to address housing affordability, including boosting supply and increasing density limits in parts of the capital cities.

“Expert report after expert report finds that planning restrictions are limiting supply, which forces up prices,” he said, which according to a 2020 paper authored by Tulip, has driven up average house prices in Sydney by 73 percent, Melbourne by 69 percent, Brisbane by 42 percent, and Perth by 54 percent.