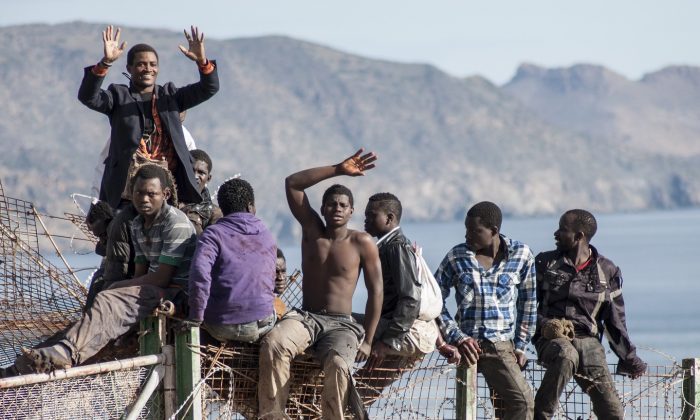 A group of people climbing the fence that separates the borders of Morocco and the Spanish territory of Melilla in an attempt to migrate to Spain, on April 3, 2014. (Blasco Avellaneda/AFP/Getty Images)
Africa

Concerns About African Immigrants in Spain

More than a thousand sub-Saharan immigrants were rescued by Marine Salvage on the Spanish coast in the second week of August. They crossed the strait on inflatable boats, and were later looked after by the Red Cross, Cáritas Parroquiales, and a legion of volunteers, according to the Spanish organization Aleteia.

While checking how to protect these immigrants’ lives, these NGOs reveal that it is difficult to know what to do with them, and point out that shelters are overcrowded. In municipal wards the “courts” become makeshift barracks for basic care, explained Aleteia.

“On one side we find holiday guests who enjoy a well-deserved time off.  On the other side, there are immigrants coming from another world, fleeing from Ebola, wars, mafia and fundamentalism”, the organization claimed.

The Archbishop of the city of Tangier, located on the Atlantic coast of North Africa, Monsignor Santiago Agrelo, also supports this humanitarian work and notes that many migrate from there. “If society does not move, the immigration laws will return them to darkness,” said the Archbishop.

The Forum for the Social Integration of Immigrants (FISI in Spanish) published a report on the current status of the integration of immigrants and refugees in Spain, which cited data from the UNHCR (UN agency for refugees) in September 2013. At present, there are more internal refugees and displaced people in the world than at any time since 1994.

“Among the major problems for refugees in Spain now is the growing difficulty to apply for asylum and to get access to the asylum procedure,” warned FISI’s report.

This report also states that the main cause of displacement in the world is armed conflict. The year 2012 marked the end of a decade characterized by a refugee crisis that reached unprecedented levels.

Conflicts such as those of Congo, Mali, the Arab Republic of Syria, and Sudan forced more than 1.1 million refugees to flee, while in 2011, 800,000 people became refugees, the report concluded.

Link to original article in Spanish