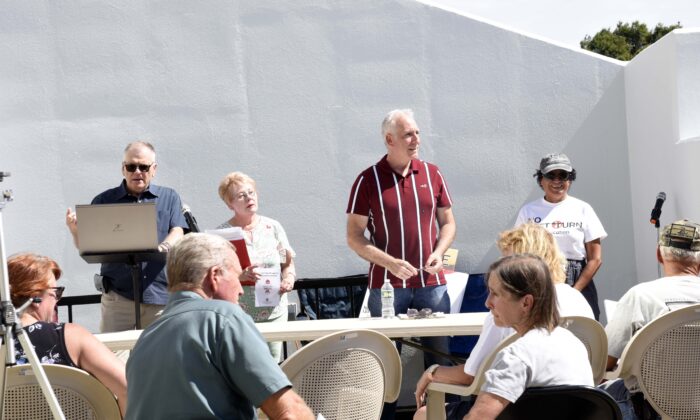 Parents and teachers gathered in front of the Woodbridge municipal complex on Aug. 14 to protest new sex education guidelines set to be implemented in New Jersey public schools starting this fall.

The state’s Board of Education adopted the new standards in June 2020.

The 66-page curriculum guide from the New Jersey Department of Education (DOE) will teach children about being non-binary and, using graphic language and classroom re-enactments, that their biological features don’t necessarily dictate their true gender.

“That’s insane. That’s not for children. You shouldn’t be teaching that to children in school,” said Elsie Carol, a Catholic and mother of a 12-year boy, to The Epoch Times.

Many parents believe it’s the parent’s right and responsibility to teach their children when it comes to sex education.

“I feel it’s very contradictory to our family’s moral values … I don’t want my son to be taught something that contradicts what my husband and I are teaching him at home,” Carol said.

“We’re not saying that you can’t talk about sex or anything like that. But when it contradicts what we’re teaching in our faith, I have a big problem with that,” she said.

According to John Chacko, a hospital director, and a father of three, what is being taught in schools is not age appropriate.

“It is illegal to talk about sexuality at work. You can get fired. I work in a system where I manage 30, 40 employees,” Chacko told The Epoch Times.

“And I have to make sure they are not talking about these things,” Chacko said. “But here we teach them when they are five and six- and seven-year-old … Why is this taking place in this country? That is my question to these politicians trying to indoctrinate our children.”

However, Governor Phil Murphy and other curriculum supporters said the topics are current and in line with what the students are already exposed to outside the classroom.

“My child hasn’t been exposed to this,” Carol said.

“So, because someone else’s child has been exposed to this type of content, that means it’s okay for the school system to expose my son to this content?” she questioned. “I’m on top of my son. I teach him the right way to live. I teach him moral values.”

“Every parent [with young children] … we actually control what they watch on TV, on the internet and things like that. But once they go to school, we are giving up that right in terms of what teachers teach them,” Chacko said.

“So, we have to get involved to ensure teachers are teaching the right thing, which is reading, math, and science in school,” he said.

“We don’t want them to be indoctrinated. That is working against what the parents are trying to do at home.”

New Jersey allows students to “opt out” of any part of the health, family life, or sex education classes if it conflicts with their beliefs.

But Carol still feels there is “no escaping” because “it is going to be somehow snuck in there.”

“I have to opt my son out of this type of teaching. But it’s still hidden in all the other subjects. So, he’s going to have it slowly put in his mind regardless of whether I opt him out of the sex ed program,” Carol continued.

“This shouldn’t even be taught there.”

A Bigger Picture Than Sex Ed

The rally was organized by a group called No Left Turn in Education and co-organized by Paul Lund, a Woodbridge resident, and teacher in a non-public school.

Lund told The Epoch Times that he organized the rally because he saw how leftists—or what they call Woke ideology—had infiltrated schools, how it distracted from what was traditionally reading, writing, and arithmetic.

“There’s no such thing as absolute truth anymore. Everyone’s got their own truth. And if everyone’s truth is valid, then truth is meaningless. It’s like an opinion. Everyone has one. And so, I want to bring truth to the conversation.”

Lund said he had no kids in the school system, but he did have kids in his classroom. He tried to give them “what they call the hidden curriculum of character development, and attitudes of gratitude for being in the greatest country in the world.”

“It is to develop citizens with a love and appreciation of the freedom we have in this country, rather than to develop activists who have grievances against this country, who want to see it destroyed,” Lund said.

“Our country is on the verge of being destroyed from enemies out and enemies within. That disturbs me. I want to do something about that.”

At the rally, Thomas Maras, a retired businessman, was another passionate person who wants to do something for the children. He is currently a candidate for an at-large representative on the Woodbridge Township School District school board in New Jersey.

“We have to have someone on the school board that actually is going to be there fighting for parental rights,” Maras told The Epoch Times.

Maras was unhappy with the school board’s agenda and failure to represent the community and he didn’t see them standing up to the state mandates about anything.

“What we’re teaching our kids is not going to serve them well when they get out in the real world and have to make a living,” Maras told The Epoch Times.

“I don’t like DEI (diversity, equity, and inclusion) in the way that they’re trying to present it. I feel that it’s really going to desegregate a child’s mind, especially with sexual education. And we need to stand up. We do not have to take everything the state says and do it.”

“We believe children should be educated, not indoctrinated,” Maras said.