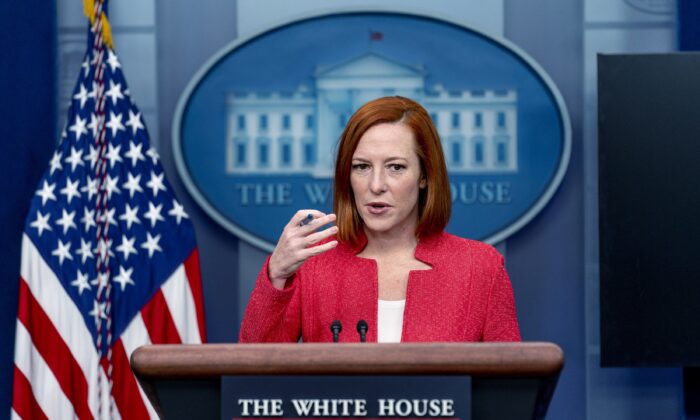 This after three rounds of high-level talks last week that included the U.S., Russia and several European countries and were meant to deescalate the situation and find a diplomatic path forward.

Russia has amassed roughly 100,000 troops along its border with Ukraine and in Russian-annexed Crimea in recent weeks. Most recently Russia announced joint military exercises with neighboring Belarus which also shares a border with Ukraine.

“We’re now at a stage where at any point Russia could launch an attack on Ukraine,” said Psaki on Jan. 18.

Secretary of State Antony Blinken spoke with his Russian counterpart, Foreign Minister Sergey Lavrov, on Tuesday and the two have agreed to meet in Geneva, Switzerland later this week.

Blinken will travel to Kyiv on Wednesday to meet with Ukrainian President Volodymyr Zelenskyy, and then move on to Berlin before meeting Lavrov Friday, according to the State Department. Officials say the trip is meant as a show of U.S. support for Ukraine and to make another call for Russia to de-escalate and pursue diplomacy.

This will follow a U.S. bipartisan congressional delegation that traveled to Kyiv to meet with Zelensky on Monday to reaffirm U.S. support for Ukraine.

President Joe Biden has spoken directly with Russian President Vladimir Putin in recent weeks. During the calls, Biden said that the United States and its allies would impose severe sanctions against Russia if it further invades.

German Foreign Minister Annalena Baerbock traveled to Washington on Jan. 5 to present a unified front with Blinken in saying Russia’s military buildup near Ukraine’s border poses an “immediate and urgent challenge” to European security and that any intervention would draw severe consequences.

Germany has suspended the certification process of the yet-to-be-approved Nord Stream 2 pipeline that would carry 55 billion cubic meters of natural gas from Russia to Germany every year if approved by regulators.

U.S. officials have also accused Russia of enacting a “false flag operation” and social media campaign to use as pretext for a Ukrainian invasion. Russia has denied this.

Ukrainian officials said Sunday that Russia was behind a cyberattack that defaced Ukrainian government websites.

Last month, Moscow submitted draft security documents demanding that NATO deny membership to Ukraine and other former Soviet countries and roll back its military deployments in Central and Eastern Europe.

On Monday, Lavrov, Russia’s top diplomat, rejected the U.S. allegations that his country was preparing a pretext to invade Ukraine. Speaking to reporters, he dismissed the U.S. claim as “total disinformation.”

Lavrov reaffirmed that Russia expects a written response this week from the United States and its allies to Moscow’s request for binding guarantees that NATO will not embrace Ukraine or any other ex-Soviet countries or station its forces and weapons there.