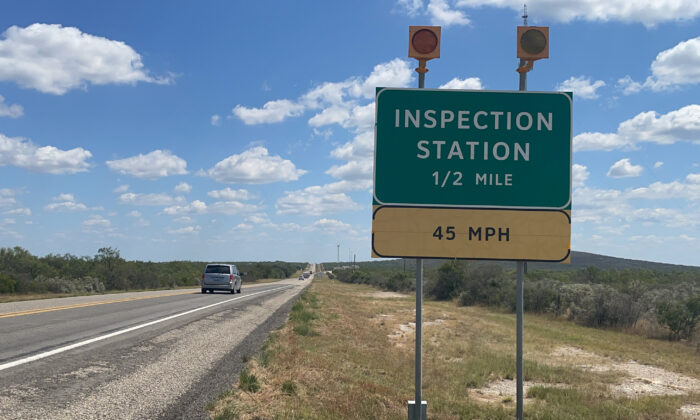 UVALDE, Texas—Border Patrol has been forced to close down several highway checkpoints near the border to free up more agents to deal with the crisis unfolding under the international bridge in Del Rio, Texas.

The two highest-volume checkpoints now closed are on Highway 57 from Eagle Pass to San Antonio and Highway 90 from Del Rio to San Antonio. A checkpoint at Comstock, Texas, is also closed. The closures leave the highways largely unimpeded for human and drug smugglers—most of the extra Texas state troopers deployed to the border highways are also being pulled to the bridge for security.

Just hours after the closures, Kinney County Sheriff Brad Coe said he’s certain the lack of checkpoints is already being exploited by “everybody—cartels, human smugglers, on and on.”

Coe was a Border Patrol agent in the area for 31 years before becoming sheriff. Kinney County sits on Highway 90 between Del Rio and the checkpoint near Uvalde.

“It’s a straight shot from Del Rio to San Antonio now—nobody to check anything,” Coe told The Epoch Times on Sept. 17.

Border Patrol and other law enforcement agencies are struggling to contain the situation under the bridge in Del Rio as thousands of illegal immigrants cram into a dirt area adjacent to the Rio Grande. As of mid-afternoon on Sept. 17, more than 12,800 illegal aliens, mostly Haitians, were camped out under the bridge waiting to be processed by Border Patrol. The number has swelled almost by the hour since the morning of Sept. 13 when around 2,000 were under the bridge.

Highway checkpoints are usually located from between 40 miles and 70 miles beyond the U.S.–Mexico border and are designed to stop the traffic that is traveling from the border. Often, an agent with a K-9 will be working to help find drugs or hidden humans.

The amount of drugs seized at the highway checkpoints has already gradually decreased this year as Border Patrol agents have continually been pulled into processing large numbers of illegal immigrants.

At highway checkpoints along the whole southern border, agents have seized 431 pounds of fentanyl during the last 11 months, according to Customs and Border Protection (CBP) statistics. More than 2,000 pounds of cocaine and 5,285 pounds of methamphetamine were also seized.

Mayor of Uvalde Don McLaughlin said it was still too early for Uvalde to feel the impact of the checkpoint closure, but “now it’s just wide open.”

“You want to bring drugs through, bring them through,” he said. “There’s no checks … there’s no Border Patrol.”

McLaughlin said he expects an increase in the groups of illegal aliens who aren’t stopped by Border Patrol at the border, as agents are forced to leave miles of border unprotected.

Uvalde sits around 70 miles from the U.S.–Mexico border. The city has been dealing with a spike in vehicle pursuits through town, as well as burglaries.

“My police department is spread thin, our burglaries are up about 80 percent in Uvalde,” said McLaughlin, adding that the culprits aren’t all illegal aliens.

“One smuggler got his car impounded and the jail was full so they wouldn’t take him, so they released him in town. He broke in two houses, four automobiles, and stole six guns,” he said.

CBP didn’t respond to a question regarding how long they anticipate the highway checkpoints to be closed.