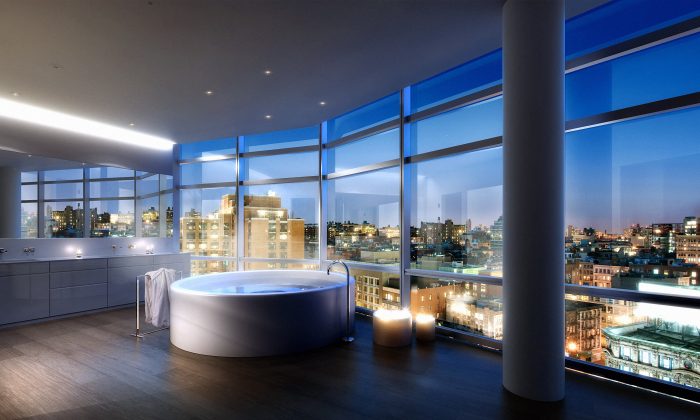 Residents in the Enrique Norten-designed One York Street building in Tribeca have been turning down resale offers for up to $50 million, according to Urban Compass listing broker Frank Giordano. But its 5,350-square-foot, 10th floor unit lingers.

One York is a 33-unit boutique condominium building with an outdoor heated swimming pool and sundeck, and its downtown location is conveniently close to trendy restaurants and shops.

The 10th floor was originally three separate units, but the seller decided to turn the entire floor into a second-home bachelor pad after the 11th floor sold for nearly $24 million.

Its listing price was recently cut from $22 million to $18 million, and then the listing was passed from Town Residential to Urban Compass.

“First, we threw a launch party,” said Giordano. “Because one of the problems is, people were having trouble conceptualizing it.”

Staging can do wonders for most listings, but since the 10th floor is under construction, the event was held on another floor. Designs were drawn by architect Drew Lang to further help with picturing the full-floor unit.

With the help of a few questions, the custom quiz on the listing’s website brings up to-scale floor plans designed for several different lifestyles, mostly for fun. The team envisioned plans for an art collector, an entertainer, a tech entrepreneur, a family, or a bachelor.

“The plans were all very carefully and thoughtfully created to accommodate these five possible users,” Lang wrote via email. “The art collector for instance has much of the apartment dedicated to flexible gallery space, which can also be set up and utilized as living room space.”

The large space and undetermined floor plan makes the unit just as suitable for a bachelor as for a family, Giordano said.

Many new-construction units in the neighborhood have sold to families because of the large amount of space they offered, and the 10th floor could do the same. It’s currently listed as a 4-bedroom, 4 1/2 bathrooms in an exclusive building between Tribeca and SoHo.

Other units in the building have been marketed toward international buyers as well.

“It’s a very unique sort of opportunity to make it your own space,” Giordano said.