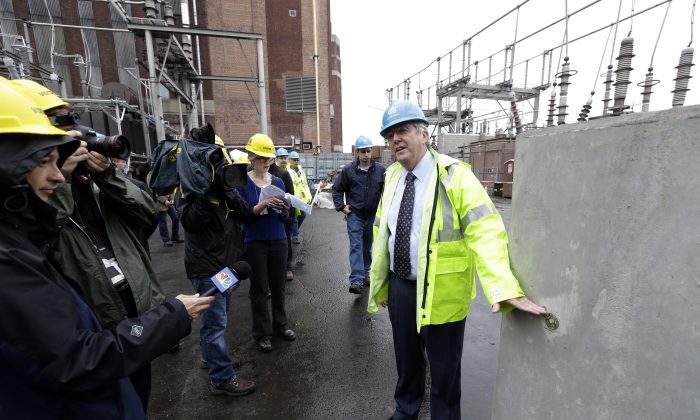 Con Edison’s Chairman and CEO, Kevin Burke, points to where the flood waters reached during Superstorm Sandy on a wall put up to protect a relay house at the Mill Yard substation during a news conference to announce investments made to protect its energy delivery systems from major storms Tuesday, May 28, 2013, in New York. (AP Photo/Frank Franklin II)
New York

NEW YORK—As the summer heat starts to bear down on New Yorkers, Con Edison says it’s ready for the huge increase in electricity use.

Con Edison’s system, which has 9 million customers in the five boroughs and Westchester County, has an electric grid designed to meet what’s known as peak demand. That peak demand, which is the maximum electricity Con Edison customers need at any given time, usually reaches its peak for a few months in the hottest part of summer. The reason: air conditioners.

“We’ve put the new equipment in the ground for the summer months,” said Chris Olert, a spokesman for Con Edison on May 31. “That’s when most New Yorkers crank up their air conditioner usage. Rare is the New Yorker who uses electricity to heat their home.”

This summer, Con Edison predicts the electricity peak demand in its service area to break the record peak usage of 13,189 MW that was set on July 22, 2011.

To meet the immediate demand for electricity, and for infrastructure upgrades and fixes, Con Edison has already invested about $1.2 billion. The expenditure is part of a long term plan in anticipation of expectations that peak demand will grow by 25 percent in the next two decades.

Of the $1.2 billion, about $250 million has been spent on storm hardening measures, and another $250 million on upgrading, according to Olert.

There is a lot of upkeep to be done on a regular basis: Con Edison has 25,200 miles of underground cable, 27,400 miles of overhead cable, a quarter of a million manholes, and 210,000 poles to keep systems running.

“If we invest that $1 billion in pipes and wires and equipment and transformers and fuses and switches, those don’t have to be replaced for 40 or 50 years,” said Olert, comparing it to money that would be needed to invest in the upkeep of anything that gets serious, heavy usage. Most of the upgrades are what Con Edison is calling “storm improvements.”

That includes investing in protecting underground and overhead energy delivery systems from major storms, and actions that will help limit power outages and increase the speed of service restoration to customers.

Olert adds that in the course of a typical year, some equipment needs to be repaired or replaced, but the double-impact of Hurricane Irene followed by Sandy was a lot for the system, particularly when underground areas got inundated with seawater.

“What made Sandy so violent was the volume of saltwater,” said Olert.

In addition to the summer upgrades and improvements, Con Edison is also making a $1 billion overall investment for storm improvements over the next four years.