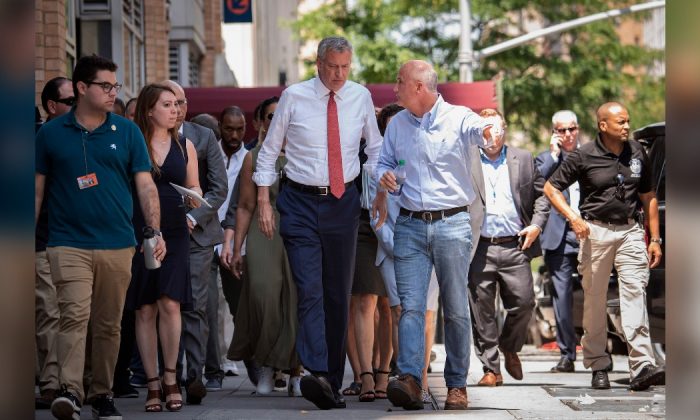 NEW YORK—A relay protection system that should have isolated a faulty distribution cable, but didn’t, led to the loss of power that darkened Manhattan for several hours, Con Ed said Monday, July 15, in a preliminary review.

The relay system at a West 65th Street substation should have kept the problem that started in a nearby distribution cable from spreading by detecting the electrical fault and directing circuit breakers to de-energize it, Con Ed said in a statement.

Instead the electrical fault was isolated at a transmission substation at West 49th Street, which led to the Saturday night power outage.

The blackout affected thousands for about five hours along a 40-block stretch that included some of Manhattan’s busiest areas like Times Square and Rockefeller Center.

It also created a political problem for New York City Mayor Bill de Blasio, who was in Iowa for his presidential campaign at the time.

On Monday, he continued to fend off criticism.

De Blasio said on MSNBC that he was in frequent contact with agencies handling the emergency and that he thinks first responders did an “incredible job.”

During an appearance Monday on “Morning Joe,” de Blasio insisted that the blackout response was well-managed with his remote supervision. No injuries were reported from the blackout, he said, noting that power was back on within several hours.

“It doesn’t matter where you are, you’re in charge of your team and making sure people are executing a plan,” said the mayor, who is seeking the Democratic nomination for president. “The important thing is to get the right people into the right place.”

De Blasio said he took a four-hour car ride from Iowa to Chicago and got on the first available plane home.

Cuomo, speaking on public radio Monday morning, said he would leave it to the voters of New York City to pass judgment on de Blasio’s response, but added that “there’s no substitute for firsthand information and firsthand knowledge” during an emergency.

“People want to see their leader on-site, in charge, in control, and it makes people feel more confident,” Cuomo said. “There is no substitute for showing up.”

Cuomo ruled out the suggestion, raised by The Post’s editorial, that he use his authority to remove de Blasio from office.