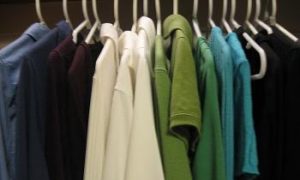 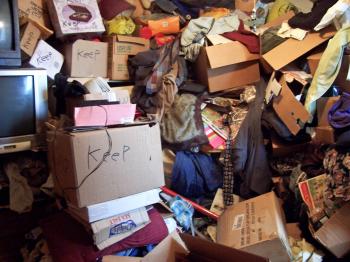 The senior living in this one-bedroom apartment wrote 'keep' on several of the items that she hoarded. Many hoarders seek help only when a crisis, such as a fall, or a rodent or bedbug infestation, forces them into it. (Used with permission)
International

Compulsive Hoarding: When It Goes Beyond Clutter

Joan Delaney
Senior Editor, Canadian Edition
Joan Delaney is Senior Editor of the Canadian edition of The Epoch Times based in Toronto. She has been with The Epoch Times in various roles since 2004.
View profile
Follow
biggersmaller
Print
Stacks of old newspapers and clothing piled to the ceiling in every room; chaotic mounds of valuables, junk, rotten food, and even human waste all mixed together; so much stuff packed into the kitchen and bathroom that they can’t be used.

This is how life can become for compulsive hoarders—those who obsessively amass a large amount of items of no apparent worth and are unable to discard any of them, even when everyday living is compromised.

For some hoarders, many of whom are elderly, shame over the state of their home, or fear that they’ll be put into a long-term care facility if their living conditions are discovered prevents them from seeking help.

“I’ve found some pretty deplorable conditions that people are living in as the cost of sort of maintaining their independence, because they’re afraid that one thing will lead to another,” says Elaine Birchell, an Ottawa-based hoarding intervention specialist.

Some chronic hoarders simply can’t bear to part with a lifetime of often useless accumulated possessions—things they just might need one day—even if it causes distress, and puts their health at risk.

“They feel that their safety, their security, their happiness, their meaning in life, their worth is defined, and in direct proportion to the number of things they have, and perhaps the types of things,” Birchell says.

There are several forms of the condition, which range from clutter to full-blown hoarding. Either scenario can be dangerous for seniors, particularly those with health and mobility issues. Some people hoard dozens of animals or birds, which also becomes a health hazard.

Hoarders learn to be very adept at hiding their situation from family and neighbors, and it often takes a crisis, such as a fall, or a bedbug or rodent infestation, to bring attention to their squalid living conditions.

Worldwide, an estimated 1-2.5 percent of the population are hoarders.

“What we find is no matter where you go, the prevalence rate seems to remain the same,” she says. “What might change are the things that are hoarded, because quite often those are culturally relevant. If you’re in one place in the world you might be hoarding a different type of thing, because that’s what’s in your environment.”

“Given enough time, most hording situations can and will deteriorate to that point,” says Birchell, adding that for the last three months she’s been working with an 82-year-old client who has had 11 tons of hoarded material hauled away from his basement and back yard alone.

She discovered he had been eating canned foods that were so old he was constantly getting food poisoning, which was misdiagnosed as gastroenteritis.

Hoarding is a mental disorder that can be genetic, with 84 percent of hoarders having a parent or sibling who hoards. It can also be triggered by the death of a loved one. Several studies have reported a correlation between hoarding and obsessive–compulsive disorder. People who compulsively hoard are often perfectionists.

“Hoarding is really quite common,” says Lenore Cabral of VHA Home HealthCare, which operates an “extreme cleaning” program in Toronto for those who are at risk of eviction because of the clutter they have accumulated.

“It’s a fire hazard, it’s unsafe, and it’s unhealthy, and they’re in violation of their tenancy agreements … and we basically clean out the apartment in order to protect these individuals’ homes.”

Sometimes clutter accumulates because the senior is depressed and no longer able to cope, and has no family left.

“A lot of these seniors that we have been serving—they’ve out-lived their family and they’re very isolated in the community,” says Cabral.

Counseling for hoarders is something Birchell says is necessary to keep compulsive hoarders from accumulating more stuff after their place has been cleaned up.

“If you clean up a property and the person is no wiser about why they’re doing this, and they’ve had no support in an informed way, then all you’ve done is make room for more stuff, because the behavior will be repeated,” she says.

How the cleanup is handled is also important, as it can trigger “tremendous anxiety” in the hoarder, she adds.

“Sometimes we’re not successful, because sometimes it triggers a lot of anxiety and distress, and the clients stop the work and we have to leave, we can’t force our services there,” she says.