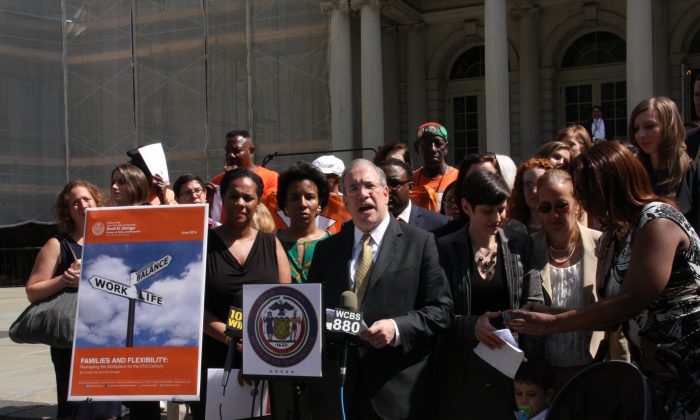 NEW YORK—New York City Comptroller Scott Stringer called for more access to flexible work hours on Monday, citing a report his office released on work-life balance in concert with the introduction of Right to Request legislation by fellow Democrats in City Council and State Assembly.

Right to Request laws expand the rights of employees to demand changes in working hours from employers and shield employees from repercussions of making such demands.

“We must support policies that see family and work as complementary, rather than competing interests,” said Stringer.

If requests for changes in work hours are denied, employers will have to submit written explanations that meet certain guidelines to the relevant government agencies.

Stringer said he did not include in his report the punitive measures that could be taken against employers that violate Right to Request regulations.

Elyse Buxbaum, Stringer’s wife, joined him at the press conference with their two children, 2-year-old Max and 13-month-old Miles.

“Like many moms, I struggle daily to balance my professional life and my family life, from doctors’ appointments and day care drop-offs, to parent conferences,” said Buxbaum. “It’s a juggle that we figure out day by day, just like thousands of New York City parents.”

Asked about the potential economic impact of Right to Request legislation, Stringer replied that current work conditions keep women out of the workforce.

“Women are paid 82 cents on the dollar, part of the reason is that they have to step out of the work force because they can’t find jobs with flexible hours,” he said. “This is discriminatory, it’s unfair, and it’s part of a bygone Mad Men era.”

Nily Rozic, New York Assemblywoman and sponsor of the Right to Request bill in Albany, wants an equal balance between the roles men and women play at home and at work.

“We want more men at the kitchen table, and we want more women at the corporate board table, but the only way we can get to that parity is to have employees and employers sit down and have these workable, flexible arrangements, “said Rozic.

KPMG Workplace Solutions Director Barbara Wankoff joined Rozic to express support for Right to Request, saying that much of KPMG’s success has to do with its “culture of flexibility.”

“For most of us, life isn’t always predictable, and what is needed is the ability to respond to day-to-day situations that arise: a sick child that can’t go to daycare, a school closing, a need to be home for a repairman,” said Wankoff.

By introducing the Right to Request legislation, New York will follow Vermont and San Francisco, which instituted similar legislation in the past year.