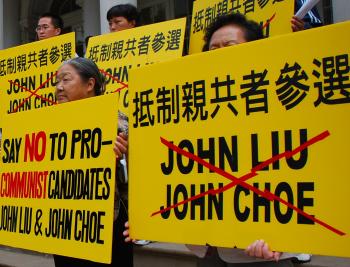 Representatives of several Chinese community groups declared that City Councilman John Liu is not a suitable candidate for city comptroller due to his dishonesty and close ties with the communist regime back in China.

“His dubious character and disturbing behavior has raised serious concerns about whether his bid will ever bring justice. … If [his campaign were] ever successful, it will bring damage and disgrace to the local community and city at large,” said Chen Zhifei, a professor at the City University of New York at the protest.

One example of dishonesty listed by the speakers is John Liu’s new TV campaign advertisement.

“He came here at five, and by seven had to work in a sweatshop to make ends meet,” a narrator reads in the ad as images of women bent over machines in a crowded factory appear on the screen.

“Working in finance taught Liu how to account for every penny, but working in that sweatshop as a kid taught him why we need to.”

However, John Liu’s supposedly tormented childhood in a sweatshop was contradicted by his own 69-year-old mother, Jamy Liu, who told the Daily News in an interview arranged by her son that she never went to the factory.

She said, instead, she was in the garment industry and worked at home. Young Liu helped his mother work on the knitting machine.

He was paid 25 cents—what his father, Joseph Liu, describes as allowance—for every ball he spun on a yarn-spinning tool.

Liu Guohua, spokesperson for the Committee to Safeguard American Values, said that his parents’ side of the story is most likely true since they were a wealthy family.

“John Liu fabricated such a big lie to deceive New York residents,” said Liu Guohua. “Besides obtaining more votes, he had another purpose in mind. Namely he wanted to imply that the United States has been a society … where exploitation and child labor commonly take place.”

In addition to living in a two-garage Bayside house, John Liu’s family had a big house and two maids before immigrating from Taiwan, according to Chinese-language newspaper World Journal.

“As an economist, I can tell you this. The important attributes of city comptroller are honesty, his unwavering belief, fairness, and justice—which happen to be in short supply in Mr. Liu,” said Chen. “This man has to be stopped.”

Apparent Ties with the Chinese Regime

“The Chinese community is compelled today to step out to say our opinion to the mainstream society, because we live in the Chinese community—where John Liu lives, we know him better,” said David Lu, spokesperson for Christian Democracy Party of China.

Last year, Chinese Consul General Keyu Peng of New York encouraged mobs to verbally and physically attack local practitioners of the Falun Gong spiritual practice. The encouragement was admitted to in recordings verified by the U.S. Department of State. Police arrested more than 22 individuals who were involved in verbal and physical abuse of the practitioners.

“When peaceful, innocent residents of local community were assaulted, physically assaulted for their belief by thugs hired by the Chinese consulate, those people turned to Mr. Liu for help,” said Chen. “Sadly Mr. Liu turned those innocent people away. Even more sadly, he made [friendly] gestures to those thugs—the very perpetrators of the crime.”

Liu Guohua brought up the story of Falun Gong practitioner Judy Chen, whose two sons have been serving for the U.S. army in Iraq. Chen, upon being attacked by pro-CCP individuals, appealed to John Liu’s office, but was refused. Nevertheless, John Liu invited those accused of the attacks to his office to be heard.

“He also did not forget to bolster CCP’s military events. He went to the Chinese consulate himself over the years to send a certificate congratulating the launch of Chinese spacecrafts,” Liu Guohua said.