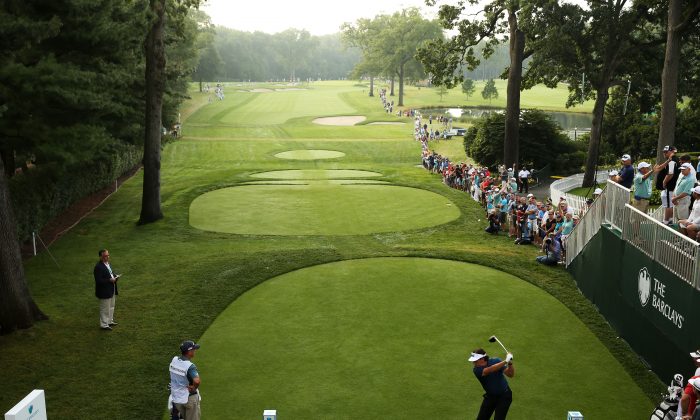 Phil Mickelson plays his shot from the first tee during the first round of The Barclays at The Ridgewood Country Club. (Darren Carroll/Getty Images)
Golf

Composite Course Used at The Barclays This Week

PARAMUS, N.J.—One of the more fascinating elements of this week’s Barclays event at Ridgewood Country Club is that the 18-hole course is made up of holes chosen from each of the three nines constituting the 27-hole facility.

Legendary architect A.W. Tillinghast, who designed Ridgewood, and who, incidentally, lived and had his office in nearby Harrington Park, provided maximum elasticity in providing for 27 holes on the nearly 230-acre site.

However, even Tillinghast could not have envisioned how staging major golf championships in modern times involves a wide range of logistical issues—foremost among them the need for a testing golf course in conjunction with maximizing the viewing experience for fans coming to the event.

In 1974, when Ridgewood hosted the U.S. Amateur, the event was played on the East and West nines exclusively. At the 2001 Senior PGA, the event was held on the Center and West nines. With this being the third Barclays event hosted by Ridgewood, the thought process early on was to see if a configuration of the best holes from the course could be created and, at the same time, work in conjunction with the critical needs across the spectrum.

The routing uses seven holes from the East course minus the 8th and 9th holes. From the Center nine, all but the 1st, 7th, 8th, and 9th holes are used. The final six holes of the West course make for a stellar conclusion of the total 18 holes played.

“The course is made up of 18 of our best holes and flows very well. The course grows extremely longer and harder as you wind through the front nine and into the back,” said Dave Reasoner, head professional at Ridgewood since 2003 when taking the helm at the young age of 23. “The back nine yardage stretches to 3,851 yards. The nice part of the course layout is that the other nine holes that are not in use give the spectators a lot of viewing areas and openings to watch multiple golf holes from one area.”

The concept of reconfiguring holes from different courses on one site is not a new one. It has been done over the years at various layouts—both here in the United States and internationally. Among the more noted sites that have done this include a recent U.S. Open site—Congressional in 2011 in Bethesda, Md. The most famous of comebacks for the American Ryder Cup team happened in 1999 at The Country Club in Brookline, Mass., which has always used a composite course—the added holes of 11 through 13 is a formidable stretch of demanding par-4 holes. On the international front, the most noted of courses doing likewise is Royal Melbourne in Australia.

It’s important to point out that composite courses are creations meant for special occasions. Should one show up at Ridgewood and have the opportunity to play the course—the existing routing of the three nines is used.

Composite courses need to flow properly to avoid long walks between holes while also offering the proper balance between hole types and lengths used. The fascinating usage of holes played this week at Ridgewood will likely fade into the background as the focus on the leaderboard takes hold this weekend, but its usage is a clever way to get the most out of such a unique piece of property.