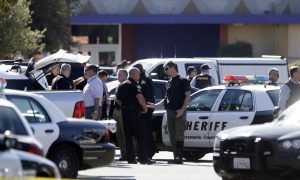 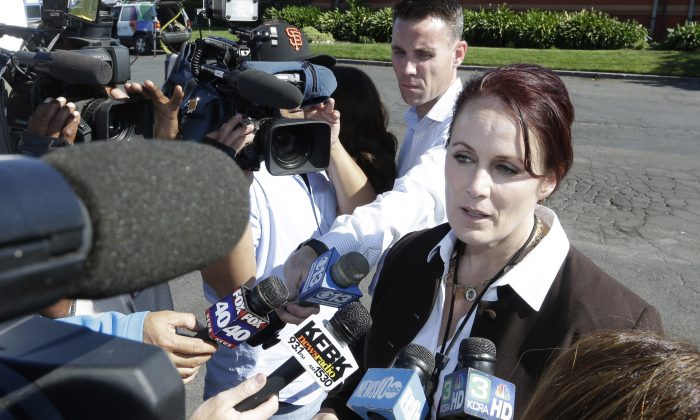 Sacramento County Sheriff's spokeswoman, Sgt. Lisa Bowman, talks to reporters about the shooting of Sacramento Sheriff's deputy by an assailant who then carjacked two vehicles prompting a manhunt in Sacramento, Calif., Friday, Oct. 24, 2014. The suspect is believed to be the same person who later shot two Placer County Sheriff's deputies. Authorities are searching a canyon in the Sierra Nevada foothills near Auburn for the suspected in the shooting of the three law enforcement officers and a bystander in an attempt to carjack a vehicle.(AP Photo/Rich Pedroncelli)
Crime and Incidents

SACRAMENTO, Calif.—More than 100 law enforcement officers from across Northern California responded without being asked after hearing that one of their own had been killed at the start of a shooting rampage, a sheriff’s spokeswoman said Saturday.

“It was an amazing response,” Erwin said. “We don’t call for those people, they just show up on their own because they know a fellow officer has been shot.”

The officers will all be questioned as part of the complex, ongoing investigation into the attack on Friday that ended after two deputies were dead and two other victims were wounded.

Investigators spent Saturday at the multiple crime scenes “trying to kind of sort through the chaos so we can methodically rebuild this,” Placer County Sheriff Ed Bonner said.

Two suspects were questioned for hours as authorities sought a motive for the shootings that began when Sacramento County sheriff’s Deputy Danny Oliver, 47, was shot in the forehead with an assault rifle at close range as he checked out a suspicious car in a motel parking lot.

Deputies suspect the shooter was 34-year-old Marcelo Marquez of Salt Lake City, who was being held without bail on suspicion of two counts of murder, two counts of attempted murder and two counts of carjacking.

His wife, 38-year-old Janelle Marquez Monroy, was in custody on suspicion of attempted murder and two counts of carjacking.

The suspects have talked to investigators, Bonner said, but what sparked the shootings remained unclear.

“‘Why,’ I guess, will remain a question for a long time,” he said. “Why was his reaction so violent?”

It was also unclear what brought the heavily armed suspects from Utah to California, Bonner said. There were no indications they had been sought by authorities.

No attorneys were listed for either suspect in jail records.

Krista Sorenson of Salt Lake City was confounded by the arrest of Marquez. He and his brother had mowed her lawn about four years ago.

“They were just super nice, decent hard-working, trying to figure out how to make a living,” she said.

Oliver, a 15-year veteran of the department, left a wife and two daughters.

After he was killed, the gunman shot Anthony Holmes, 38, of Sacramento at least twice, including once in the head, during an attempted carjacking. He was in fair condition.

The attackers then stole a pickup truck and fled about 30 miles northeast into neighboring Placer County.

Two deputies who approached the pickup while it was parked alongside a road were shot with an AR-15-type assault weapon and never had a chance to return fire, Erwin said.

Homicide Detective Michael David Davis Jr., 42, died at a hospital 26 years to the day after his father, for whom he was named, died in the line of duty as a Riverside County deputy.

Deputy Jeff Davis was treated for a gunshot wound to the arm. The two deputies are not related.

“It’s a nightmare for all of us,” Bonner said.

He recalled Davis as a well-liked investigator who once took it upon himself to organize a funeral for an abandoned baby.

“He saw it, his heart ached, and he did something about it,” Bonner said. “That’s who he was.”

Davis’ wife works as an evidence technician for the department and his brother is a sergeant.

“Mike was quite a character,” Erwin said. “He was very funny. He didn’t take things very seriously, maybe because he was a homicide detective for so long.”

A search of Utah court records for Marquez shows a history of about 10 tickets and misdemeanor traffic offenses between 2003 and 2009. Those records list one speeding ticket for Monroy in 2009 and three small claims filings attempting to collect outstanding debts.

From The Associated Press. AP Writer Lindsay Whitehurst contributed to this story from Salt Lake City.