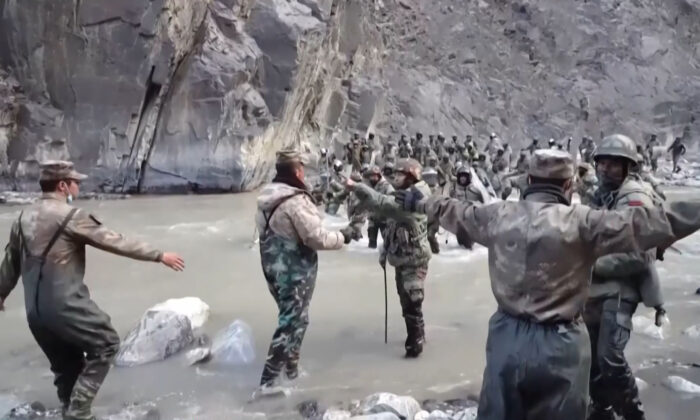 This video frame grab taken from footage recorded in mid-June 2020 and released by China Central Television (CCTV) on Feb. 20, 2021, shows Chinese (foreground) and Indian soldiers (R, background) during an incident where troops from both countries clashed in the Line of Actual Control (LAC) in the Galwan Valley, in the Karakoram Mountains in the Himalayas. (AFP Photo/China Central Television)
Global Expansion

NEW DELHI—Recent media reports of a complete de-escalation on the India-China border in Eastern Ladakh are false as Chinese troops have not retreated from the friction points last created post May 2020, when the conflict between the two armies escalated, according to an Indian satellite imagery expert.

“Latest images do not indicate any significant troop or equipment reduction by CCP China’s PLA [People’s Liberation Army],” retired Col. Vinayak Bhat, a satellite imagery expert and an Indian military intelligence veteran, told The Epoch Times in an email. “The media hype on reduced threats or de-escalation by PLA are incorrect.”

It was widely reported across the media on Sept. 13 that the last remaining friction points on the Line of Actual control (LAC) or the de-facto disputed border between India and China, which fall under the purview of China’s Western Theatre Command, are resolved, as troops from both countries pulled back from their respective positions in the Gogra Heights-Hot Springs area. But Col. Bhat said that, while disengagement has happened at various points, de-escalation is yet to happen.

“Disengagement ensures that troops, which were in eyeball to eyeball confrontational positions, move back thus avoiding a sudden eruption of conflict due to tense situations,” he said. “Whereas de-escalation involves troops returning to their barracks and resuming peacetime activities.”

Bhat cited satellite imagery from Sept. 16 that showed no change in the military buildup at patrolling point 15 (PP-15) at Gogra-Hot springs and opposite PP-17A, which is known as Gogra post.

After the PLA incursion into Indian territory in 2020, when things started to escalate, PP-15 was among the five friction points between the two armies—the others were PP-14 in the Galwan valley where things turned bloody on June 15, the nearby PP-17A, and another two on the northern and southern banks of Pangong Tso (high grassland) lake.

Post May 2020, PLA troops were thus occupying Indian land. The PLA pushed a heavy build-up of troops and weapons into the region, creating eye-to-eye confrontation between the two sides, which is why the disengagement has been so significant.

In February last year, the two armies completed disengagement in the Pongong Tso region, while a few months later in August, forward deployments ended at PP-17A. After the recent military commander-level talks between the two sides, the two militaries said in a joint statement that disengagement has started at PP-15 as well.

“On 8 September 2022, according to the consensus reached in the 16th round of India China Corps Commander level meeting, the Indian and Chinese troops in the area of Gogra-Hot springs (PP-15) have begun to disengage in a coordinated and planned way, which is conducive to the peace and tranquility in the border areas,” read the statement.

However, Bhat said in a post on Twitter on Sept. 18 that the latest satellite imagery of PP-15 and the Gogra Heights-Hot Springs area shows no reduction of force, which means that while disengagement has happened, de-escalation is yet to occur and the border situation remains sensitive.

“CCP China’s PLA in occupied Eastern Ladakh has NOT de-escalated. Satellite image of temporary post is 42km from both own PP15 & Gogra. Illegally constructed road 15km beyond LAC still exists,” he wrote.

#CCP #China’s #PLA in #occupied #EasternLadakh has NOT de-escalated.#Satellite image of temporary post is 42km from both own #PP15 & #Gogra.
Illegally constructed road 15km beyond #LAC still exists.
Latest images of #PP15 & #Hotsprings show no reduction in forces as 16 Sep 2022. pic.twitter.com/YhkRsZPqDr

Bhat told The Epoch Times that he doesn’t believe the PLA is being true to the spirit of what it’s claiming to do in the border region.

“CCP China’s government and PLA have always been pathological liars,” he said.

“They probably have claimed troop pullback by 2km in one particular location indicated in my first satellite image. The vacation of one temporary battalion-sized post in the same valley does not have any significance strategically or even tactically. If they really wanted to do something worthwhile in this area, then PLA should have obliterated the 15km of illegally constructed road even beyond the Chinese perceived LAC,” he said.

Keeping troops in such close proximity to borders creates a tense environment that can flare up quickly, Bhat said.

“Since China is not a trustworthy neighbour, complete de-escalation needs to be achieved through talks at the earliest. It also has economic ramifications for both India and China, when both countries are aspiring to reach stable economic growth.”

As The Epoch Times previously reported, the decades-long border dispute has roots in the Chinese regime’s first leader, Mao Zedong, and his conquest designs for the western regions of Xinjiang and Tibet.

The Epoch Times has also obtained a booklet published in 1963 by the government of India entitled “Chinese Aggression in Maps.” It’s a cartographic documentation of how, without provocation, the CCP entered the uninhabited Indian territories in northern Ladakh after it came to power and unilaterally continued to shift Chinese claim lines from 1956 onwards.

The Indian administration in its booklet said the Chinese regime were claiming boundary lines in Ladakh due to their “bargaining convenience and progressively increasing extent of occupation of Indian territory through force.”

“Chinese PLA activities in this area have always been suspicious since late 1950s,” Bhat said. “They built roads and other infrastructure, surreptitiously requesting for research permissions in Eastern Ladakh in 1950/60s. The same salami slicing strategy with buns of lies are being propagated now by the Chinese side. India and the Indian Army needs to be extremely cautious of Chinese intentions in this area.”

The retired colonel said that India should request China return Eastern Ladakh, along with the Tibetan Kailash Mansarovar areas where India used to collect taxes until the late 1950s.

Mansarovar is the origin of four major Asian rivers, including the Indus and is a pilgrimage spot for Hindus, Buddhists, Jains, and the Böns of Tibet.