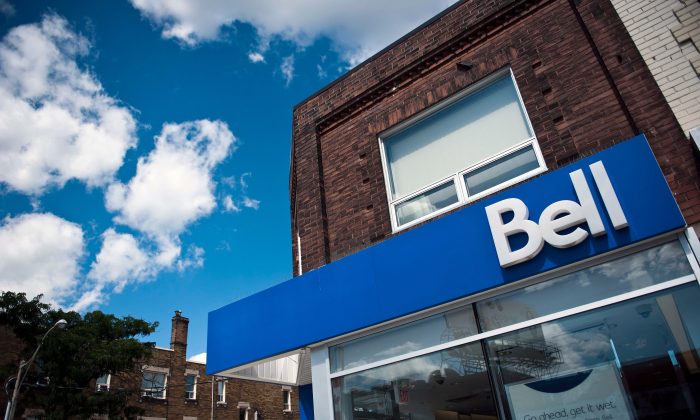 Bell Canada topped the list of companies getting wireless complaints, according to an annual report. Similar to last year's report, billing errors by telecom companies were the No. 1 complaint. (The Canadian Press/Galit Rodan)
Canada

MONTREAL—Complaints about wireless data, roaming charges, and Internet bandwidth charges have more than doubled, with Canadian consumers showing increasing distrust of the bills they get from telecom providers, says the industry’s watchdog group.

Billing charges involving these three issues generated customer complaints more than 1,500 times in the past year, according to the annual report by the Commissioner for Complaints for Telecommunications Services released on Wednesday.

Howard Maker, commissioner and CEO of the organization, said people have difficulty understanding how their data use is measured and telecoms are falling short on explaining the charges.

“You can’t wrap your arms around a gigabyte of data,” Maker said in an interview from Ottawa.

“It’s not tangible. People really have to rely on their service provider and many Canadians are not prepared to do that.”

Maker said the industry should do a better job of relaying how data charges accumulate, such as providing consumers with documentation of the data used upon request.

“In no case that we reviewed did we find a service provider which offered a way to independently verify that the amount of data measured was accurate,” the report said.

“We again urge the industry to take greater steps to instil confidence in the metering and billing of data, roaming and bandwidth charges as this is a growing area of complaints with potentially costly consequences for consumers.”

About 60 percent of all complaints about telecom services—wireless, Internet, home phone and long-distance service—concerned cellphone service, same as last year, as use of the device has exploded.

Bell Canada and Rogers topped the list of companies getting wireless complaints—Bell with 4,000 complaints, followed by Rogers with 3,800 and Rogers’ Fido with nearly 1,000.

Telus had 883, Bell’s Virgin Mobile Canada had 776, and new player Wind Mobile rounded out the top six with 635.

Billing errors were again the No. 1 complaint. But complaints against cellphone roaming charges jumped to 721 in the August 2012-to-July 2013 period, up from 211 in the comparable 12-months a year earlier.

Roaming fees can rack up bills of thousands of dollars, especially during travel outside of Canada. A new wireless code, which comes into effect Dec. 2, will cap national and international data roaming charges once they reach $100 within a single monthly billing cycle, unless the customer expressly agrees to pay additional charges.

“I’m optimistic it’s going to solve a lot of problems and hopefully reduce complaints, as well,” Maker said of the wireless code, which also reduces the standard three-year cellphone contract to two years.

However, Canada’s major telecom companies are challenging part of the new wireless code, saying it would affect millions of three-year cellphone contracts retroactively.

The federal government noted in a recent throne speech that it will take steps to reduce roaming costs. The Canadian Radio-television and Telecommunications Commission may also consider regulations as a result of consumer complaints.

Complaints about data charges more than doubled to 539 from 264 year-over-year, the report found.

Maker also noted in his report that employee training by the telecom companies is “one of the banes of the industry,” saying there needs to be more effort in training and retraining employees so they can help consumers understand the services they are buying.

The number of complaints handled by the watchdog group—which included both cellphone and other services provided by telecoms—increased 31 percent, to 14,036, in the latest 12-month period. It said more than 90 percent of complaints were resolved to the satisfaction of the customer and the telecom service provider.

After billing errors, the second-biggest complaint was loss of service and repair issues, followed by 30-day notice for cancellation, early termination and cancellation fees, and non-disclosure of terms and misleading information of terms.