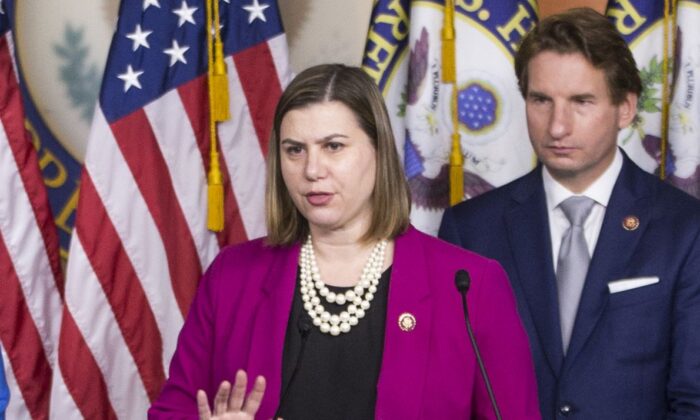 Michigan Democrat Rep. Elissa Slotkin has been named in a complaint filed with the House Ethics Committee by a nonprofit government watchdog, citing a video in which the congresswoman appears to ask a political action committee (PAC) for campaign contributions.

“On May 11, 2022, Rep. Slotkin attended a virtual meeting of the Jewish Democratic Council of America (JDCA). She appears to have attended the meeting from her congressional office, presumably with congressional office equipment, with her congressional staffer present, and during the meeting discussed campaign strategy and solicited campaign contributions,” the Washington-based Foundation for Accountability and Civic Trust (FACT) said in the complaint filed June 9.

During the May 11 video meeting, Slotkin told the JDCA officials: “I do not believe I can win unless we have significant turnout from Michigan State students. Full stop. If there’s anything we can do on voter registration and voter turnout—that is, I think, the only way that I will hang on to this district.

Michael Horowitz of the JDCA responded to Slotkin: “You need to let us know—we know how we can help you, of course—never enough campaign contributions, particularly in an election that I think they’re gunning for you. The Rs see you as very vulnerable and so we want to be there for you as you were always there for us.”

Slotkin was accompanied throughout the nearly five-minute video by Greg Chaffin, her national security adviser. Chaffin was paid $76,611 as a Slotkin adviser in 2021. House members’ staffers are paid from tax dollars specifically appropriated for the purpose and are barred from using official resources in campaign activities on behalf of their boss.

In the complaint, FACT explained that “federal criminal law prohibits a member from soliciting or accepting any type of campaign contribution while located in congressional buildings.”

Title 18 of the U.S. Code Section 607 states: “It shall be unlawful for an individual who is an officer or employee of the federal government, including the president, vice president, and members of Congress, to solicit or receive a donation of money or other thing of value in connection with a federal, state, or local election, while in any room or building occupied in the discharge of official duties by an officer or employee of the United States, from any person.”

The FACT complaint also noted the Federal Election Commission makes clear that “the prohibition against House members or employees soliciting campaign or political contributions in or from House offices, rooms, or buildings is very broad.”

The complaint further noted that the ban in federal laws and regulations, as well as congressional ethics rules, covers voter registration drives as in-kind contributions—that is, contributions received in a form other than money—as are “soft-money” contributions.

The complaint added that rules issued by the House Office Building Commission ban the use of congressional office buildings for solicitations of any kind except those for charitable purposes.

A photo posted on Twitter on May 11 by Slotkin’s office and included with FACT’s announcement of its complaint showed Slotkin meeting with Maj. Gen. Paul Rogers of the Michigan National Guard appears to be in the same office as in the video of Slotkin and Chaffin meeting with the JDCA officials.

The Office of Congressional Ethics was asked by FACT in its complaint to expedite an investigation of Slotkin, claiming that “this case is especially egregious because it implicates the foundational ethics principles that members cannot use government resources for their political gain.”

“Therefore we urge the board to immediately investigate Rep. Slotkin for using official resources for campaign purposes, soliciting campaign contributions from Congressional buildings, and for violating federal campaign finance laws.”

The ethics office is headed by Omar Ashmawy, who has six staff members working for him.

A spokesman for Slotkin didn’t respond to The Epoch Times’ request for comment on the FACT complaint and the presence of Chaffin during the video meeting with the JDCA officials.