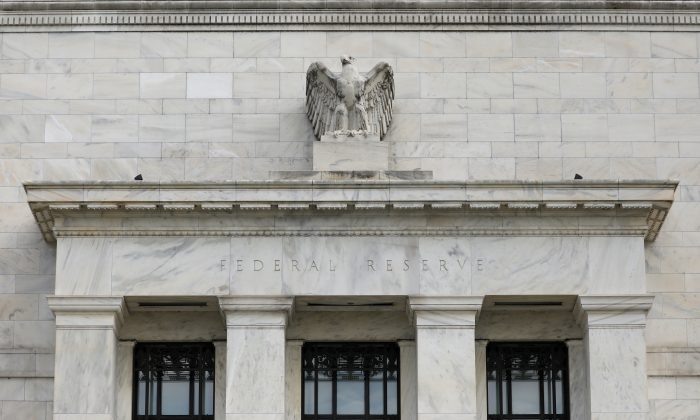 The Federal Reserve building in Washington in this file photo. In order to improve its performance, the Fed needs some competition from private players. (REUTERS/Chris Wattie)
Viewpoints

Those who criticize and want to bypass the Federal Reserve must put their money where their mouth is. Instead of just talking about a better way, they can demonstrate that private money is superior.

President Donald Trump has put his finger on the problem of the inordinate, unsettling power of the Fed and a “false economy.” However, hope for a political solution appears futile, since the central bank has proved itself immune to meaningful legislative reform.

Heavily dependent on low-interest and easily accessible debt, Congress is neither qualified nor motivated to rein in the central bank, as it has fomented economic instability. Since President Richard Nixon removed the last vestige of the gold standard in 1971, the dollar has lost more than four-fifths of its value.

Even if Congress were willing, without a viable alternative they could only chip away at the edges and leave the underlying fiat currency intact. The bottom-up, nonpolitical solution is creative destruction: “industrial mutation that incessantly revolutionizes the economic structure,” as defined by economist Joseph Schumpeter in 1942.

Competitive currencies have the potential to peacefully disrupt central banking. As documented by Lawrence White of George Mason University and the Cato Institute’s Alt-M project, free banking is the natural, laissez-faire alternative. It predates central banking and evolved to meet market needs without the need for an imposed monetary monopoly.

A thoughtful reform idea within the prevailing Fed paradigm comes from a Mercatus Center policy briefing released in November, titled “How to Improve Fed Accountability and Transparency.” Inadvertently, though, economist Scott Sumner proves how little can be done while working from the inside.

Mercatus is a rigorous free-market policy institute, and Sumner acknowledges the conflicting dual mandate. It is, in fact, an opaque and archaic triple mandate from the Federal Reserve Act: “maximum employment, stable prices, and moderate long-term interest rates.”

One glaring outcome is that few people know when the Fed has or has not achieved its mandate, even in severe cases such as the Great Recession that began in 2008. That rules out legal repercussions for failure.

Sumner contends his proposal merits consideration because it could garner pivotal approval from both the Fed and Congress. Efforts for more meaningful reforms—such as a single, explicit monetary-policy rule—”have not been successful, partly owing to opposition from within the Fed.”

What must be done to garner Fed approval, however, would be funny if it were not meant to be serious. Sumner’s “accountability mechanism” is for the Fed to write its own performance targets and then “self-report” on them to Congress. That will show the Fed!

He is right that this could get through Congress with Fed backing. He is wrong that this would achieve anything. A lack of reporting is simply not the Fed’s shortcoming. Twice each year, officials send a monetary policy report to a Senate committee, along with testimony from the Fed chairman. Further, the Government Accountability Office reviews and reports on Fed activities, while each Fed district bank undergoes an annual external accounting audit.

Economics Profession Out to Lunch

There are many brilliant monetary economists, and one working in the free-banking tradition is George Selgin, professor emeritus of the University of Georgia. There is also Spanish economist Daniel Lacalle, now based in the United Kingdom and author of “Escape from the Central Bank Trap.”

However, the profession at large has succumbed to influence from the Fed, the nation’s largest employer of economists holding doctorate degrees—more than 300 are on staff.

Sumner’s proposal reflects the profession’s typical, deferential view, which should come as no surprise. Econ Journal Watch has documented the Fed’s overwhelming funding role within academic economic research. In 2002, for example, 74 percent of U.S.-based journal articles on monetary policy were either in Fed-published journals or written by Fed staff economists.

The Overton window has become limited to how to set precise interest rates. Sumner explains the Fed has one job, for all intents and purposes, nothing more: increase or decrease aggregate demand (an economy’s total willingness to spend, given a range of price levels). In fact, his plan for “accountability” translates to less pressure from Congress.

Some plans for addressing interest rates are still better than others, and the Taylor Rule would be preferable to the status quo. Named after economist John Taylor, who first promoted the idea in the 1990s, it would substitute an algorithmic rule for human discretion. This would provide heightened clarity and remove the temptation to push or pull the U.S. economy at opportune times.

This limited proposal brings us full circle, though, since it has been around for decades and has failed to garner political traction. Even if the Taylor rule is coherent, the Fed and Congress want discretion and refuse to see the harm they have done. Further, the Taylor rule does not address the inherent, centralized instability of a monetary monopoly or the Federal Reserve’s unconstitutionality as a quasi-private cartel. Nor does it remedy the Fed’s long-term wealth redistribution away from the working poor and middle class.

The Horizon Draws Near

The array of alternatives to fiat currencies are spawning and visible for all to see. Even though a revival for the classical gold standard remains unlikely, private cryptocurrencies are evolving at a rapid clip, and central banks realize the threat to their privileged positions.

Ecuador has already experimented and failed with electronic money, while banning private cryptocurrencies. More recently, the Bank of Canada examined in detail the prospect of introducing its own digital currency.

After 10 years of bitcoin, cryptocurrencies still struggle with price stability and transaction affordability. However, their wider adoption will come. White and many other economists are participating in Initiative Q and other stablecoins that address the vulnerabilities of bitcoin.

While the Fed may not be accountable to the people of the United States, it sure will notice if people stop using its notes. Demelza Hays, a doctoral candidate at the University of Liechtenstein, describes the rising competitive pressure from blockchain technology as a “quick exit” and “proposal for justice.”

Goldmoney offers the opportunity for customers to buy and store gold in an account with them which can then be used like a regular bank account, including a debit card. Monetary Metals offers bonds and leasing investments denominated in gold and with an interest paid in gold.

Similar to the wide adoption of cryptocurrencies, these projects are small—but they do provide a voluntary alternative to government money.

Competitive pressure will compel the Fed to put up or shut up, and without the need for futile lobbying or votes. Alternative currencies—even as they go through teething pains—offer the opportunity for constituents to withdraw their consent and, in the long term, make the Fed irrelevant.