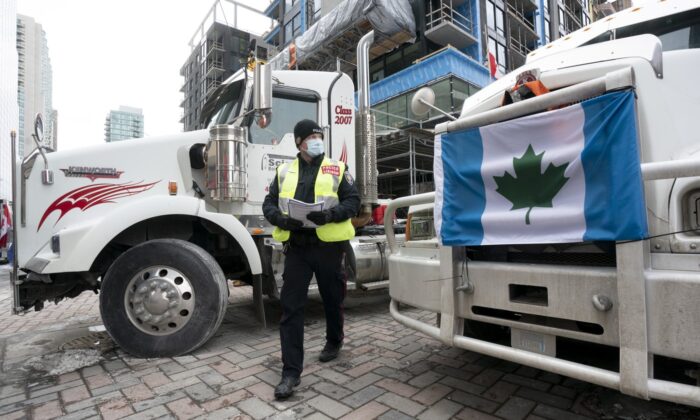 A police officer walks between parked trucks as he distributes a notice to protesters, Feb. 16, 2022 in Ottawa.(The Canadian Press/Adrian Wyld)
Canada

A senior Liberal minister says the government has “two competing interests” when it comes to sharing information about its use of the Emergencies Act: transparency and protecting national security.

Government House leader Mark Holland was responding this morning to questions about what information the Liberals will provide to a judge tapped to lead an independent inquiry into the circumstances surrounding the declaration of an emergency.

While the government says Ontario Appeal Court Justice Paul Rouleau will have broad access to classified documents, it has not said whether that will include access to secret documents held by Trudeau’s cabinet.

That has sparked questions and frustration from civil liberties organizations and opposition parties who worry the inquiry will not be given access to key documents about closed-door discussions and decisions by ministers.

The Liberal government declared an emergency under the act for the first time in history on Feb. 14, granting extraordinary temporary powers to police and banks.

The Emergencies Act requires the government to call an inquiry within 60 days of revoking such an emergency declaration.