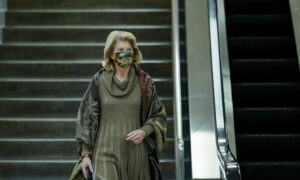 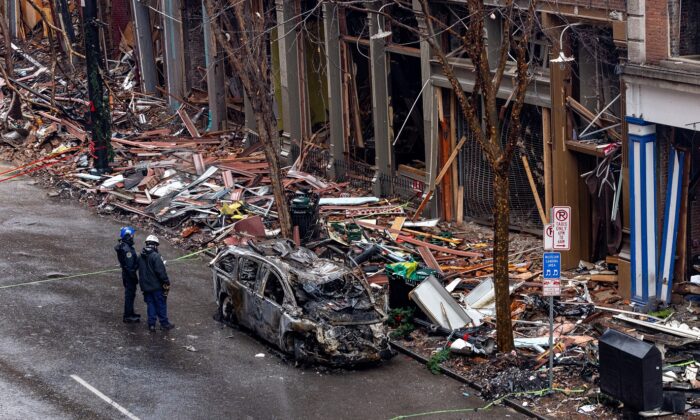 Nashville police officers stand next to an incinerated vehicle and observe damage done to the historic buildings on Second Avenue in Nashville, Tenn. on Dec. 31, 2020. (Alex Kent/Getty Images)
Viewpoints

You may find it instructive, as I did, to look at the headlines, with their subheads, from two different and apparently unrelated stories in Thursday’s New York Times.

Here’s the first, in its on-line version: “Behind the Nashville Bombing, a Conspiracy Theorist Stewing About the Government: Anthony Warner, who was obsessed with an outlandish tale about lizard aliens and other plots, had been planning for months.”

And here’s the second, also as it appears on-line: “Four Subway Stabbings and a Young Man’s Downward Spiral: The rampage on the A train line reflected a convergence of crises—homelessness and mental illness—in a desolate subway system.”

Both involve what could be described as terrorist incidents in two widely separated cities and both consider the Times’s implied attribution of motive to the two perpetrators to be important enough for placement in larger type in the headlines themselves, rather than waiting for the story to follow.

But there the similarity ends.

The Nashville man is named and described, without even waiting for the subhead, as an anti-government conspiracy theorist, thus automatically placing him in the company of the paper’s own “basket of deplorables” along with the Capitol rioters of Jan. 6, who are routinely described in such terms.

The subway stabber, on the other hand, is an anonymous “young man” (in the article he is named as Rigoberto Lopez) in a “downward spiral” of “homelessness and mental illness.” Even the subway system—“desolate” on account of the coronavirus lockdown—is treated as a part of the “convergence of crises” that is presumed to have driven Mr. Lopez to commit his “deadly rampage.”

Here, surely, we are meant to see someone—a “person of color” as we learn from an accompanying photo—who is more victim than perpetrator, even though two of his own victims died.

By the way, no one but himself died in Mr. Warner’s Nashville bomb blast, which went off in the city’s business district in the early hours of Christmas morning after anyone in the area was warned to evacuate by Mr. Warner in a recorded message.

That bit of information, however, is reserved to the last line of the article’s 2000 words.

The “lizard aliens” of the first sub-head have obviously been selected from among the “other plots” with which Mr. Warner is said to have been “obsessed” in order to suggest a certain derangement on his part, too, but the dignity, and the vagueness, of “mental illness” is denied him.

The three authors of the second article, by contrast, claim that “Mr. Lopez’s trajectory illustrates the city’s threadbare safety net for people with mental illness.”

That is, I suppose, among other, less important things that it “illustrates.”

“There is clearly a mental health crisis playing out on the streets of New York, and it is absolutely playing out underground as well,”—so Sarah Feinberg, interim president of New York City Transit Authority told the authors.

Not so much in the streets of Nashville, however. There, Mr. Warner’s “lizard aliens and other plots” are described not as signs of mental illness but as “false information and outlandish tales”—just like those that are constantly alleged to have motivated the Capitol riot.

That article’s four authors then go on to aver that “this mind-set has become alarmingly familiar to law enforcement officials now reckoning with the destructive force of conspiracy theories that mutate endlessly online and played a role in the Jan. 6 attack on the U.S. Capitol.”

See how that works? The authors admit that “Mr. Warner’s motive remains shrouded in mystery”—and even that he “was not among the angry QAnon followers who came to believe the unlikely theory that Donald J. Trump would hold on to power by defeating a satanic cabal.”

Still, it is claimed, he had the same “mind-set” as such people.

From there it is but a small step to suggest that Mr. Warner’s belief in “false information and outlandish tales,” even of quite another sort from the QAnon kind, meant that he could, in a dim light, be made to look like just another one of those violent “conspiracy theorists” who were to invade the Capitol twelve days after his death.

True, readers who stick with the story until the 22nd paragraph will learn that “his distrust of the government dated to roughly [2001], as he subscribed to the 9/11 conspiracy theory that it was an inside job rather than a terrorist attack by Al Qaeda.”

Yet the authors feel no need to mention that this particular conspiracy theory is much more often associated with left-wing than it is with right-wing views. So, for that matter is the one which believes in “lizard aliens.” Insofar as the latter can be said to have any political dimension, it is directed against the British royal family and the Rothschild family of Jewish bankers, as the article acknowledges.

So far as the Times is concerned, however, this is no reason not to lump poor, mad Mr. Warner together with a generic sort of “conspiracy theorists” in order to support the media narrative, constantly repeated for the previous seven weeks and, now, taken up by attorney general-designate Merrick Garland in his confirmation hearings on Capitol Hill this week, of the imminent danger to the country of terrorism from “right wing extremists.”

He told the Senate Judiciary Committee that “We are facing a more dangerous period than we faced in Oklahoma City” at the time of Timothy McVeigh’s bombing of the Murrah Federal Building there in 1995 which killed 168 people and injured hundreds more.

In furtherance of the same narrative national guard troops continue to patrol the streets of Washington D.C., in the neighborhood of the Capitol, just as if another mob of right-wing extremists might materialize and invade it at any moment.

I wonder if there can be any connection between these events in the nation’s capital and what the New York Times is pleased to make of the difference between those earlier ones in Nashville and New York?

I also wonder if any of the paper’s readers are aware of being manipulated. Or, if they care.