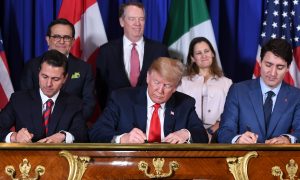 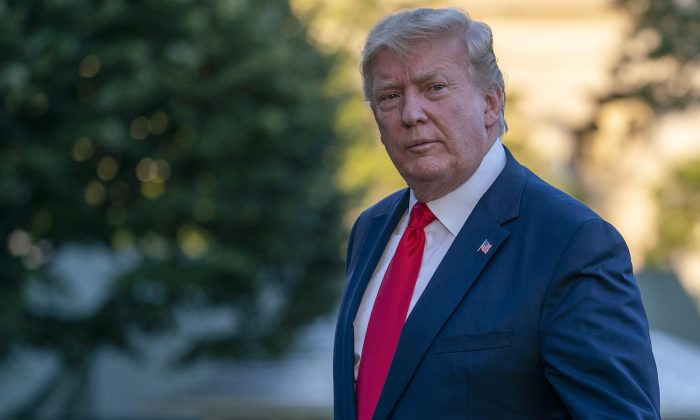 President Donald Trump walks off Marine One at the White House after spending the weekend at the G20 Summit and meeting Kim Jong Un, in the DMZ in Washington on June 30, 2019. (Tasos Katopodis/Getty Images)
Viewpoints

Comparative Advantage and the High Costs of “Free” Trade

Managed trade is a fact of political economy

President Trump has been criticized as being anti-free trade for backing out of multi-lateral free trade agreements such as the Trans-Pacific Partnership and renegotiated the North American Free Trade Agreement (NAFTA), between the United States, Canada and Mexico. The critics are right.

But being anti-free trade is not necessarily a bad thing, or even un-American. One of the first acts of the new American Congress in 1789 was to use tariffs to protect American companies from British Mercantilism. Tariff’s aren’t always good, but then again, nor is free trade.

Which is better for the country today?

For free trade advocates, the idea is quite an enticing one. It certainly sounds very American. Freedom is what we’re all about.

What could be better than free trade for the “land of the free?” The free trade school of thought relies on a few powerful concepts that are fundamentally true in theory, but often end up costing too much in practice. Let’s just look at one of those key concepts: comparative advantage.

An Idea Whose Time Has Passed

Comparative advantage is the idea that countries – or people – will operate at their most efficient levels by producing what they’re best at, and sell the surplus in exchange for needed goods and services produced by others more efficiently. This will lead to a rise in the wealth and productivity of all participants.

Academically, it was a big discovery of Adam Smith and David Ricardo, and for decades if not centuries, free market economists have insisted that unfettered free trade always works best. But in reality, it almost never works as well as in theory.

The reason is that comparative advantage and “free” trade are both subject to a variety caveats and distortions. Currency manipulation, slave labor wage levels in backward nations, price subsidies, state-owned enterprises that are market share-driven rather than profit-dependent, corrupt legal systems, technology theft and other “cheats” all give the nations using them an unfair comparative advantage in the market place.

The real world is more complex than the theoretical one.

The Tragedy – and Warning – of NAFTA

A good example of these distortions in action is NAFTA, which went into effect in 1994. It was supposed to expand markets, create more than 200,000 American manufacturing jobs in the first five years, and improve the economies and lives of workers in all three countries. Mexico was supposed to have become a “relatively high-income country” on par with Greece or Portugal, if not better.

But just the opposite occurred.

Under NAFTA, thousands of American companies moved their factories out of the United States and into Mexico. Over the course of two decades, many states in the central United States lost much of their economic viability and tax base. Today, we call that region the rust belt.

Furthermore, those millions of Americans who lost well-paying jobs were force to find two or three lower paying jobs to make up for the one they lost to Mexico. Their predicament was made worse by the legal and illegal influx of millions of low-skilled, poverty-stricken workers into the United States. This cheap immigrant labor turned well-paying construction jobs, factory work and scores of other trades into non-living wages for the average American worker, destroying American families’ livelihoods.

What’s more, the U.S. trade deficit with Mexico exploded, growing to over 575 percent by 2017. Even excluding fossil fuels, the U.S.-Mexico trade deficit was over $119 billion in manufactured items and agricultural goods.

NAFTA Made Mexico Worse-off, Too

But did Mexico’s comparative advantage in labor costs and wages combined with NAFTA raise Mexicans’ living standards? Was the Mexican economy transformed into a much wealthier and more vibrant one?

Instead, after more than two decades under NAFTA, Mexican employment, wages and productivity levels remain stagnant, ranking 18th out of 20 Latin American countries in per capita GDP. Per capita GDP actually fell by more than 80 percent from 1980 levels and there was no change in the poverty rate while the rest of Latin America’s poverty rate fell significantly.

And finally, one other hugely negative impact of NAFTA has been the expanded flow illegal drugs into America. As Jorge G. Casteneda, former Mexican Foreign Minister said in 2015: “NAFTA brought [none of] the huge gains its proponents promised. Still, NAFTA contributed significantly to one market in particular: the illicit drug trade.”

NAFTA not only destroyed American jobs and lives, but it has also contributed significantly to turning Mexico into the drug cartel warzone that it is today. Unfortunately, that result isn’t limited to just NAFTA.

Our “free trade” deal within the World Trade Organization (WTO) rules with China has also resulted in an explosion in illicit drugs flowing into the United States. China is the number one source of highly addictive, highly lethal Fentanyl class of drugs, which are the leading cause of overdose deaths in America. In 2017 alone, 49,000 Americans died from Fentanyl, courtesy of China. That’s approaching the number of Americans killed in the entire Vietnam War (58,000).

As the experience with NAFTA clearly shows, large legal, developmental and cultural gaps between trading partners can have disastrous outcomes for participants. Free trade that is abused can often lead to commoditization and exploitation of human beings, without delivering the promised benefits.