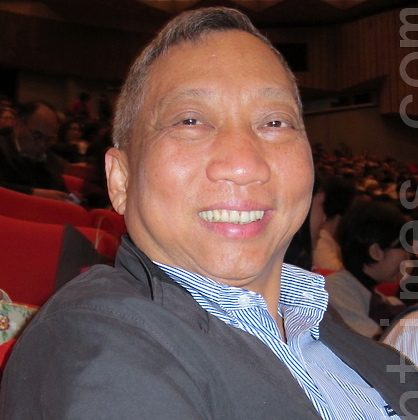 TAIPEI, Taiwan—Lin Jiayu, president of a large and famous chain of restaurants in Taiwan, Bafang Yunjin Restaurant, saw Shen Yun Performing Arts New York Company in Taipei on March 20 with his wife. Mr. Lin, seeing Shen Yun for the first time, said that Shen Yun brought him the joy of a peaceful mind. He particularly loved the lyrics sung by the vocalists, which deeply touched him.

He was inspired. “If we can let go some things in life to have the peace in our minds, we can make ourselves happier and more joyful,” said Mr. Lin.

After hearing soprano Chia-Ning Hsu sing, “What is the Meaning of Life” Mr. Lin said he felt particularly touched by the lyrics. “Actually, I always thought that we sometimes bustle about in our life, only to find that we don’t know what we have pursued at the end of our busy lives.”

The fantastic classical Chinese dance and ethnic dances performed by Shen Yun and the difficult skills represented by the dance performers transferred the performers’ happiness to Lin. He said he particularly liked the Tibetan dance, Khata for the Gods.

He said that seeing Shen Yun gave him indescribable feelings. “I felt very happy, and very peaceful.” According to the 2012 program, “Our hope is that you will leave the theater today feeling uplifted and renewed.”

Mr. Lin Jiayu established The Bafang Yunjin Food Co., Ltd. 14 years ago. It has more than 470 chain restaurants in Taiwan. It has factories in Taipei and Kaohsiung. The company sells about one million dumplings every day and at least 500 million every year. The company entered the Hong Kong market in 2009 and has more than 20 stores there. As the president of the biggest dumpling brand in Taiwan, Mr. Lin has never raised the price of the dumpling materials he sells for the chain restaurants for more than a decade. He is generous to his employees and participates in activities for the public good.