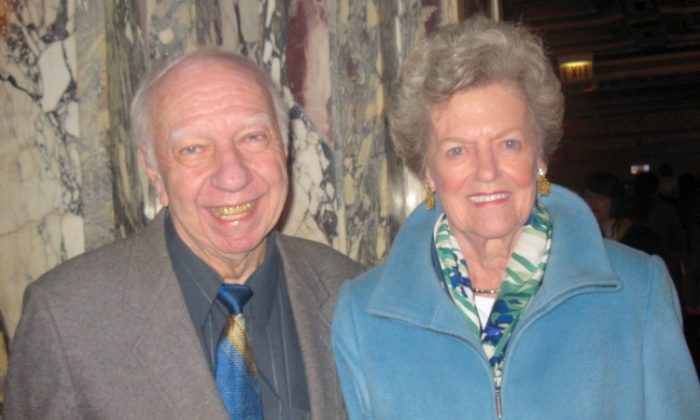 “I just loved them!” said Virginia Wendt of the dancers. “Beautiful. Beautiful with their perfection. Just perfection.”

Shen Yun travels the world on a mission to revive a lost treasure, 5,000 years of China’s divinely inspired culture through the universal language of dance and music.

Pointing to Mr. Wendt she said, “Bob was a dancer at one time, so he really appreciates dance.”

An integral part of the performance is the Shen Yun Orchestra, which has been highly praised by audience members world-wide.

Ms. Wendt said: “Oh, I loved the music. I love violin, I love cellos. It was all beautiful and very well put together.”

In a series of short, story-based performances, the artists take audience members on a journey: sometimes through ancient legends and sometimes depicting contemporary issues.

Ms. Wendt exclaimed: “I love the stories! It makes it so interesting. It’s such an old, old country compared to ours. It’s very interesting to me. I liked it all. I thought it was all interesting.”

“I thought it was exquisite!” she said.

She added that she was impressed by all the dances, and particularly enjoyed Ancient Elegance.