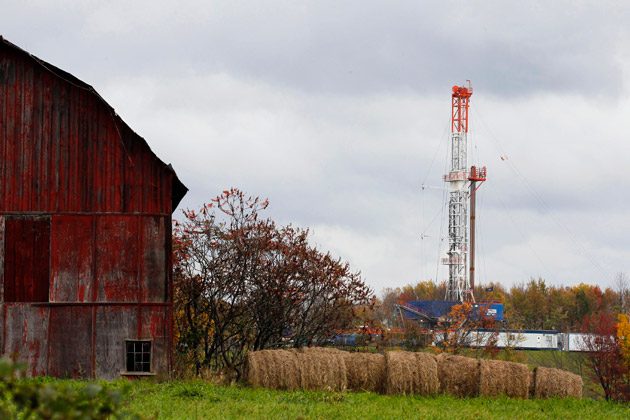 A gas drilling rig in Springville, Pa., is shown in this file photo. (Alex Brandon/AP Photo)
By Beth Brelje

Penn American Energy is in the early stages of developing a $6.8 billion liquefied natural gas (LNG) export terminal in Pennsylvania, the nation’s second largest producer of natural gas. Texas is the top producer.

The company has evaluated sites in Pennsylvania, New Jersey, and Delaware but has settled on a not-yet-specified location on the Delaware River, likely near the port of Philadelphia, according to testimony by Frank James, founder and chairman of Penn American Energy, speaking during an October hearing of the Pennsylvania Senate Environmental Resources and Energy Committee.

“There are parcels that are under real estate agreement, and we look to make a decision in the very near term,” James said, adding that a decision could happen yet this year. He anticipates 2,000 union labor jobs will be needed to build the LNG terminal.

Pennsylvania is an ideal location logistically, he testified, because it is a top producer of natural gas and already has a web of natural gas pipelines for transport from the gas fields to the terminal where it will be cooled and transformed into liquid, loaded on ships, and sent to customers around the world.

When liquefied, natural gas requires less space. It would require about 50 miles of pipeline to connect Pennsylvania’s existing pipelines to the planned terminal.

The facility would be capable of processing 7.2 million tons of LNG per year, which is about 1.2 billion cubic feet per day of natural gas, Frank said.

“The shipping channel from Delaware Bay to the Ben Franklin Bridge has been dredged to 45 plus two feet, so our facility, regardless of where it is sited, will accommodate 95 percent of the global liquefied natural gas ships in the world today,” Frank said. “Our construction timeline is 48 to 52 months.”

The company expects to file plans with the Federal Energy Regulatory Commission (FERC) in 2023 and make a final investment decision by 2024, when its efforts to raise $6.8 billion should be completed, Frank said.

Depending on the FERC approval process, construction could start as soon as 2025 with first cargo sent out by 2028.

In the same hearing, Ivo Konstantinov, head of the American Chamber of Commerce in Bulgaria, testified that much of Europe has been dependent on natural gas supplied by Russia in a monopoly and that has left the region at risk for weaponization, political influence, bribery, and corruption.

“That situation became more clear in 2014 with the invasion of the Crimea and now with [Russian President Vladimir] Putin’s ordering of the invasion of Ukraine in February, the level of Russian gas consumed by us, the European country, has fallen dramatically,” Konstantinov said. “As news of the invasion emerged, the gas market responded with a price hike and since then, Russia and Europe have been engaged in a game of chicken. Russian has the tools to weaponize its gas to Europe.”

He made an appeal to free up U.S. LNG so Europe does not have to rely on Russia.

“The U.S. LNG exports have a critical role in securing the energy security of Europe, U.S. allies, part of U.S. national interests and moral mandate and economic interests as well, particularly southeastern Europe, the region where I’m coming from,” Konstantinov said, adding that Europe wants to diversify its energy resources. “It’s just like in the First and Second World Wars, the United States came and stepped in to help the European allies and maintained world peace and American interests. This is the same appeal for us today.”

Natural gas is part of the net-zero solution in Europe, according to Michal Kurtyka, former minister of climate and environment in Poland, who testified that the demand for LNG is expected to increase dramatically.

“We need immediate, existing, off-the-shelf power generation technologies to balance our commitment to renewables,” Kurtyka said. “Existing off-the-shelf technology right now is natural gas power generation. Even if the war ended tomorrow, and Russian gas came back to the market, that would not change the current demand in Europe, because of the replacement of coal in the European Union, that is going to take place in the next five to 10 years, doubling, to three times increase of demand for energy. The structural alternatives like nuclear and geothermal for baseload power generation take longer time.”

He predicted an immediate demand in Central and Eastern Europe for 1 trillion to 2 trillion cubic feet of natural gas imports from the United States a year, and advocated for this project to help fill the need.

A Pennsylvania bill recently signed into law calls for the creation of a task force to study what obstacles are currently preventing Philadelphia from becoming a leader in exporting LNG. The task force will be charged with creating a report and recommendations to be presented to the General Assembly and the administration. The task force will be made up of people representing the General Assembly, natural gas industry, Philadelphia building trades, and PhilaPort, the shipping port on the Delaware River.

The bill was sponsored by state Rep. Martina White, a Republican.

“Pennsylvania could and should be a leader in the production and export of clean energy sources, like liquified national gas. We have an abundance under the ground that can provide the United States with energy freedom, and we have a port right here in Philadelphia that can be used to export it,” White said in a statement. “We are less than 50 miles of infrastructure away from Pennsylvania changing the world for the better. An LNG export facility here will help reduce carbon emissions globally, further U.S. energy independence, promote peace for our European allies who would no longer rely on tyrannical governments for their energy supply, create good-paying jobs and make energy cheaper for families and job creators across Pennsylvania.”

State Sen. Gene Yaw, a Republican who organized the hearing, said there is no carbon-neutral future without natural gas in the present.