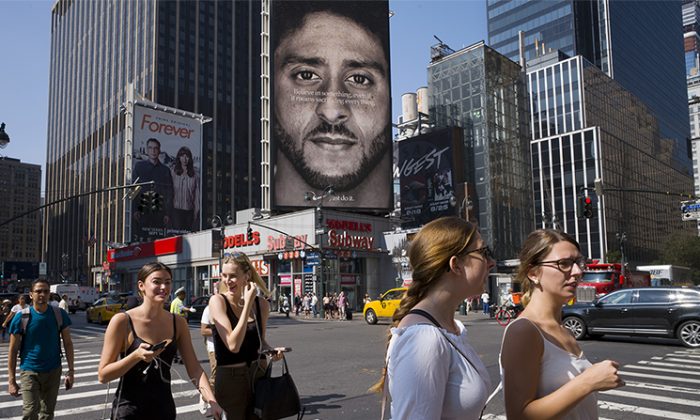 Jun Takahashi, the designer behind Japanese streetwear brand Undercover, had posted photos of Hong Kong protesters with the slogan “no extradition to China” onto Undercover’s Instagram account.

Nike pulled the release of Takahashi’s sneakers from Chinese distributors in June—citing “feedback from Chinese consumers”—and removed all products developed in collaboration with Undercover. Despite Nike’s assertions that it received feedback from “consumers,” it’s almost certain that the feedback came from the Chinese Communist Party (CCP), which has vehemently lashed out against Hong Kong residents for protesting against a proposed extradition bill that would allow any country, including mainland China, to seek extradition of criminal suspects.

Viewed in a vacuum, it’s easy to label Nike as a ruthless competitor focused on profits at all costs.

But wait—Nike actually fashions itself as a socially conscious brand with a track record of corporate social responsibility.

Former NFL football star Colin Kaepernick is a Nike ambassador. In fact, Nike recently pulled certain limited-edition sneakers featuring the Betsy Ross U.S. flag due to concerns that the Revolutionary-era flag design, according to Kaepernick, could be “co-opted by groups espousing racist ideologies,” according to a New York Times report.

While the Betsy Ross flag isn’t on the list of “hate symbols” recognized by the Anti-Defamation League, Nike still thought it prudent to pull the sneaker line due to concerns raised by Kaepernick.

In a 2018 Nike advertising campaign, Kaepernick—an anti-racism symbol—said, “Believe in something. Even if it means sacrificing everything.”

But unfortunately, Nike’s earlier decision in Asia to not stand behind Takahashi—and by extension, to not stand behind people in Hong Kong fighting against what they perceive as overreach by a tyrannical and authoritarian regime—presents starkly against everything it stood for.

Put simply, the decision invalidates Nike’s efforts to market itself as a champion of social causes.

How can Nike call itself a “champion of social causes,” while at the same time implicitly supporting a CCP regime that brutally persecutes religious adherents, betrays its “one country, two systems” promise with Hong Kong, engages in militarization of the South China Sea, blatantly steals intellectual property from foreign countries and companies, and manipulates its currency against international norms?

What does Kaepernick think of that? And what does Nike’s roster of elite athletes and brand ambassadors think of a company that holds its ethos of “social responsibility” so cheaply?

In fairness, Nike certainly doesn’t want to support tyrannical regimes. Such decisions are probably hotly contested within its boardrooms. And the unfortunate truth is that it’s much easier on the company’s bottom line to support some social causes than others.

Openly contesting the CCP would certainly be risky. Nike is one of a few companies whose China sales have been thriving even during the trade war. While sales growth was lackluster globally, China sales increased almost 20 percent, to $1.6 billion, during the last quarter of 2018. This was during a period when other foreign companies such as General Motors and Apple saw their sales flounder.

The CCP is a bully—politically, economically, and technologically. Recently, reports surfaced that Beijing has been forcibly installing apps and malware onto consumer smartphones during routine security checks to collect confidential data, even for those not suspected of any wrongdoing.

Yet transgressions by the CCP are increasing, and they are becoming increasingly scrutinized on the global stage. We are reaching an inflection point where companies must declare where they stand.

Western companies have long privately protested the actions of the CCP, but are publicly afraid. Today, corporate social responsibility is an increasingly important and unavoidable part of companies’ mission statements. And perhaps not coincidentally, U.S. President Donald Trump’s trade war has Beijing and the Chinese economy on its heels.

Individually, Western companies appear powerless or vulnerable against a regime that controls the world’s most populous nation and No. 2 economy. But together, and with the support of the U.S. administration, like-minded Western companies may have more recourse today than ever before.

At this critical juncture, businesses need to reassess their priorities and balance profit-making for shareholders with a duty toward their corporate and social missions.