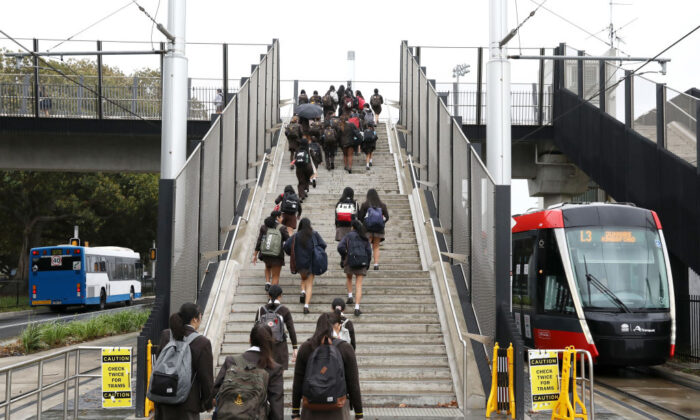 Students walk up the stairs of the overpass at the Sydney Light Rail Moore Park stop on their way to school in Sydney, Australia, on May 25, 2020. (Mark Kolbe/Getty Images)
Australia

Commuters Will Have Reduced Train Services as Rail Workers Strike

New South Wales (NSW) train commuters are being advised to work from home or find another way to get to work as industrial action impacts services again.

The Rail, Tram and Bus Union has been taking escalating industrial action throughout August.

Workers are going on six-hour strikes based on the area where they typically work, but the union is allowing the government to take workers from other areas to run a reduced capacity service.

Wednesday’s strike includes the Bankstown, East Hills and Southern lines in southwestern Sydney, but Transport for NSW said other lines would also be affected.

“A heavily reduced service will run on the T2 Inner West & Leppington, T3 Bankstown, T8 Airport & South, and the Southern Highlands lines as a result of industrial action by the Rail, Tram and Bus Union,” Transport for NSW said in a statement.

The T4 Eastern and Illawarra line was impacted by a similar strike last week.

The industrial action is part of a long-running dispute between the union and government over a fleet of intercity trains that have been sitting in storage since 2019.

The union argues the Korean-built trains are not yet safe to operate and require alterations.

The enterprise bargaining agreement covering worker pay and conditions expired in May last year, and the government has been attempting to link the two issues, making an agreement on one dependent on the other.

RTBU NSW secretary Alex Claassens says he already signed a deed for the trains’ changes at the end of June.

He was told at a meeting with government ministers last week a deed would be ready early this week.

“We can now all safely assume that they’re not going to use the deed that I signed … clearly, the lawyers are doing their job on it,” Claassens said on Tuesday.

The strikes will continue on Tuesday and Thursday next week, =Claassens said, unless a deed to fix the trains is presented and accepted by members before then.