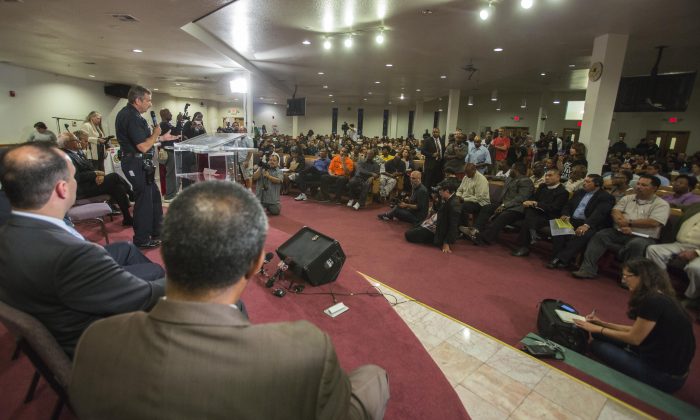 City Councilman Curren Price and the Youth Justice Coalition organized a forum with police officials at the Paradise Baptist Church, where more than 200 people gathered. The atmosphere was tense at times.

“It’s always difficult when you discuss the death of a citizen, especially of a youngster,” said Councilman Price. “It happens too many times in our community.”

Steve Soboroff, president of the LAPD Board of Police Commissioners, said there would be an independent and thorough investigation in the August 11 killing of 25-year-old Ezell Ford, and it would not be rushed.

“What I promised tonight was an investigation for, in this case, the same as if it would have been for one of my own kids,” Soboroff said. “I feel the pain of that, and everybody deserves that kind of investigation.”

However, many members of the audience, which included family of the deceased, were not satisfied with LAPD Chief Charlie Beck’s update on the investigation. He would not reveal the names of the officers involved in the shooting or a timeline for the autopsy. He said he hoped more witnesses would come forward, and he did not want the autopsy results to influence their testimonies.

“Our community—black community—does not trust the police department. I mean, it’s a trust issue, and for good reason,” said Pastor Stephen “Cue” Jean-Marie.

Keyanna Celina, 29, holds her daughter Massiah, 1, in front of a poster reading, “We Will Remember Ezell Ford” at the Paradise Baptist Church in Los Angeles on Aug. 19 before a community forum to discuss the police shooting of Ford, 25, in South Los Angeles. (AP Photo/Ringo H.W. Chiu)

Audience member Cheryl Dorsey, a retired LAPD sergeant, wanted the LAPD to tell the victim’s family why the young man had originally been stopped and questioned.

A preliminary LAPD investigation said the victim grabbed one of the police officers and then tried to remove the officer’s gun from its holster during a struggle.

But witnesses told the media the officers used excessive force and shot the young man while he was on the ground.

Ford’s family said he suffered from schizophrenia and bipolar disorder.

The death of Ezell Ford came two days after the fatal shooting of 18-year-old Michael Brown by a police officer in Ferguson, Missouri. There have been violent protests in the St. Louis suburb for more than a week.