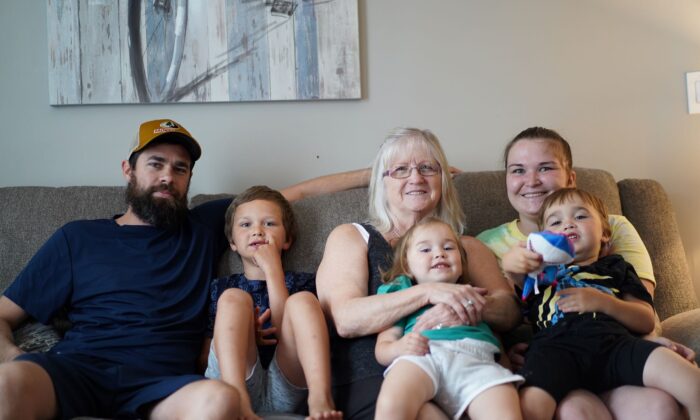 Boxes of diapers, school supplies, and toys keep piling up at Briana Austin’s grandmother’s house in Port Jervis. People who know the Austin family and strangers from as far as Monroe stopped by to deliver words of comfort and money.

Austin’s two younger children, 4-year-old Weston and 2-year-old Autumn, are running around the house, toys in their hands and big smiles on their faces, apparently not thinking at all about the house fire they escaped days ago just a few blocks away.

“It’s great how many people are really kind out there in the world, and it takes something like this to happen to see,” Austin’s grandmother Vivian Van Orden told The Epoch Times.

“There is too much hate in the world, in the news, and I think our government is at war with one another. Sometimes you wonder if there are really nice people out there. This tells you there are so many, so many … and they come from all over, not just Port Jervis.”

Van Orden helps take care of Austin’s three children during the day while Austin and her husband, Joseph, go about house hunting. They are looking to rent or buy nearby so they remain close to relatives and work.

Austin works as a dental assistant in Milford and her husband works in a factory in New Windsor.

Austin’s boss gave her a few paid days off after the devastating fire. She takes the time to sort out the kind of financial help they could get from community groups, corporations, and government agencies in terms of housing.

Most of Austin’s family, including her mother, grandmother, and great-grandmother, live near each other in Port Jervis. Austin moved back to the area with her family about three years ago and rented the now burnt-down house on Franklin Street. After the devastating fire, the landlord returned the security deposit to her.

Joseph Austin tries to be his normal self in front of the kids to help them look past the tragedy as soon as he can, especially for his 6-year-old son Chandler who is more aware of what happened than his younger siblings.

The family lost all of their belongings in the fire, except for wallets, keys, and documents stored in a safe box. They also lost two family pets, a cat named Oreo and a dog named Missy.

Oreo was buried on Aug. 21 in a relative’s backyard. Chandler got Oreo as a birthday gift when he turned six, and that burial gave him closure and comfort, Briana Austin said. The family has yet to bury Missy’s ashes.

The fire got out of control so quickly that the family did not get to save either pet.

First, it was the school laptop on a mattress in the kids’ room that got on fire. That happened around 7 a.m. on Aug. 20, and Chandler was the first one to find out.

He quickly woke up his parents.

Austin’s husband tried to put out the fire with bottles of water, but it did not work. The fire spread quickly onto the entire mattress, and by the time they grabbed wallets and keys and got ready to run out of the house, it had covered a big portion of the ceiling, Austin said.

“It was too big. It was out of control. We were like half asleep, so we weren’t even really thinking of anything but getting kids outside,” Austin said.

The family only lived on the house’s first floor, which had three bedrooms and a bathroom. There were no occupants on the second floor when the fire broke out.

There was no fire extinguisher in the house, according to Austin. She had five fire alarms, and they all went off.

Port Jervis Fire Department assistant chief Tony Fuller was just a few blocks away on a water operation drill, and he was the first to arrive on the scene. More engines from nearby companies quickly joined.

It took them about 10 minutes to put out the bulk of the fire. Afterward, they continued to work past 8 a.m. to put out the remaining fire inside the house, according to a fire department statement.

This is the fifth structure fire that Port Jervis had this year, according to Port Jervis fire chief Keith Brown. Four caused significant damage, including the one that happened to the Austin family.

According to a fire investigative report obtained by The Epoch Times through a Freedom of Information request, the origin of the fire was determined to be in the vicinity of a bed on the right side of the kids’ room on the first level; a heavily damaged laptop was found under the base of the bed. The cause of the fire is ruled accidental.

Contrary to Austin’s initial belief, no evidence was found that the laptop was plugged into a nearby outlet, according to the report. Austin had believed the laptop was left charging on the mattress overnight and the overheated battery caused the fire.

She is reaching out to the Orange County Fire Investigation Unit for more answers.

“I still don’t know what could have caused the fire, especially since this was in my son’s room. If it was the kitchen where we cooked, I could understand, but my son’s room?” she said.