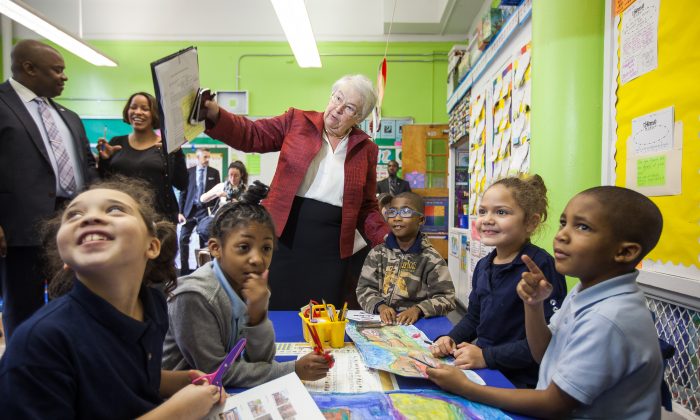 Community Partners to the Rescue of Struggling Schools

NEW YORK—Some of the city’s most struggling schools just got more help. Many of them were paired with non-profits that should help them solve their problems. And the city is covering the bill—$52 million for 4 years at 45 schools.

The solution is called “community school,” but each program may differ greatly. What should be common are a focus on attendance, social and emotional wellbeing, and health services, according to Schools Chancellor Carmen Fariña.

Fariña visited one of the schools on Monday—P.S. 15 Roberto Clemente on the Lower East Side.

P.S. 15 is one of 300 city schools on the state list of struggling schools, largely because of its abysmal results on state standardized tests. It has barely 200 students in its elementary grades, but more than one in five was chronically absent last year.

Of the 45 schools to get the help, 11 are on the state list of struggling schools and about 20 have a serious attendance problem with 30–50 percent of students chronically absent.

Fariña said the partnerships should zero in on the causes.

In P.S. 15, for example, 40 percent of the students were homeless in 2013. That is living in shelters or temporary homes, such as with relatives, according to a just released paper by the Center for New York City Affairs.

The partnering organization, Pathways to Leadership, will help with reaching out to parents, including home visits, to help parents understand the importance of schooling. Many parents, Fariña noted, don’t understand that it’s a problem to take a child out of school for a month or more.

Almost 40 percent of P.S. 15 students are diagnosed with a learning disability and the non-proit should help with creating individualized education plans for them, which is a time-consuming process required for every child with special needs.

But P.S. 15 is also one of the schools with a head start. It already has partnerships with 20 organizations and was able to cut its attendance problem almost by half in the past decade. Though almost none of its students pass the state tests, all of them are passing middle school courses after leaving the school, Education Department data show.

Other schools may not be as lucky. A community school is a long-term strategy, where the partnering non-profit brings in new services, such as tutoring, mentoring, and parent outreach. But to achieve the desired impact, it has to bring in much more services provided by other organizations, such as dental and health, arts and sports.

For example, Fariña visited the second grade classroom in P.S. 15, where an art teacher from Children’s Museum of the Arts assisted with a social studies class, helping students create their own map of Manhattan.

The partnering non-profits are also responsible for fundraising to support the additional services, as the city money won’t go far enough.

To create a whole network of partnerships with stable funding may take months and the results may be visible only years later.

Fariña expects most of the non-profits to start their work by February 2015. She’d like to see improved attendance and parent involvement in two years and improved academic results in three years.

“This is something we really believe will make a difference,” she said.