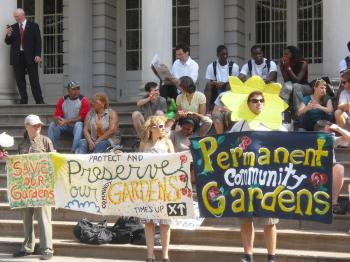 Annie Wu
Annie Wu joined the full-time staff at the Epoch Times in July 2014. That year, she won a first-place award from the New York Press Association for best spot news coverage. She is a graduate of Barnard College and the Columbia University Graduate School of Journalism.
View profile
Follow
biggersmaller
Print
NEW YORK—A coalition of elected officials called on the city to help preserve local gardens on Wednesday.

Community gardeners and activists were joined by New York City Council Speaker Christine Quinn and chairwoman of the Parks and Recreation Committee, Melissa Mark-Viverito in their efforts to call on the city to help preserve their local gardens after a settlement drawn up in 2002 expires this September.

Though the city’s Department of Parks and Recreation (DPR) and Department of Housing Preservation and Development (HPD) have issued new proposed rules, which do not offer the same type of protection from real estate developers as the settlement in 2002 did, according to the New York City Community Garden Coalition (NYCCGC), a nonprofit organization founded in 1998 for the preservation and creation of community gardens in the city.

Quinn and Mark-Viverito released in a joint statement, “By their very nature, rules are temporary and could be fairly easily repealed by a future Administration.”

Currently, there are some 600 community gardens registered with the city’s gardening program, GreenThumb, a division of DPR.

Most of the gardens were converted from vacant lots by volunteers during the city’s financial crisis in the 1970s and gardens need to acquire a license from GreenThumb under the organized group of volunteers that will maintain the garden, called a “gardening group.”

Quinn and Mark-Viverito suggested the following changes to the proposed rules to ensure better protection of the gardens for the "guaranteed renewal of a gardening license so long as the gardening group in question remains in good standing."

A public hearing regarding the new rules is scheduled to take place on Aug. 10 at the Chelsea Recreation Center in Manhattan.

There was a large crowd of garden volunteers that gathered on the steps of City Hall to support the further preservation of community gardens.

Karen Washington, president of the NYCCGC, said that the gardens are not simply for the beautification of the city and "have become an integral part of the city’s landscape.”

By providing a space for neighbors to grow food, the gardens lead the way for sustainability and “food justice,” a newly coined term for the right to have access to, grow, and sell healthy, affordable locally-grown food.

Just Food, an organization that is part of the food justice movement, connects local farms with markets in the city.

Owen Taylor of Just Food was at the gathering to voice his support for urban gardening.

“The question is not why we should have community gardens, but how we can elevate the hardworking volunteers’ work," he said, adding that the city should lead the nation in urban gardneing.

From keeping livestock and bees to teaching children in the community to eat healthy, community gardens are invaluable to the city, he said.

Speaker Quinn also addressed the crowd, urging the city to find “a legally enforceable mechanism” to make the gardens permanent. She believes they are a vital part of the city’s infrastructure.

Councilmember Mark-Viverito agreed, and said it concerns her that there is “no language for permanency” in the new proposed rules.

Mr. Truce, a community gardener, was battling a variety of serious ailments when he found the local garden in his neighborhood, where he “met good neighbors” and “had a place to rest.”

Mr. Montserrat, another gardener, noted that the gardens are also a place for elderly to do physical therapy, and where “injured souls come to heal with nature.”

Representatives from community garden advocates like The Green Guerillas and East New York Farms, along with New Yorkers for Parks (NY4P), an organization “fighting for greener, cleaner, and safer parks” in the city, were also present at the gathering.

They cited the gardens as a natural way to cool down the city and clean the air, while engaging youth in meaningful activities.

Lee Stuart, executive director of NY4P, said the preservation of community gardens is “aligned with the goals of PlaNYC 2030,” Mayor Bloomberg’s sustainability plan for the city for the next twenty years.

Outside the City Hall gates, two Brooklyn bands collaborated to form “Fresh Greens,” as they played their instruments to inform passerby of their cause.

Hanakyle Moranz, a Brooklyn resident with the band, said, “The non-cement, green space is essential to my health…it brings people together, I meet new people, and it’s a new place to go hang out.”