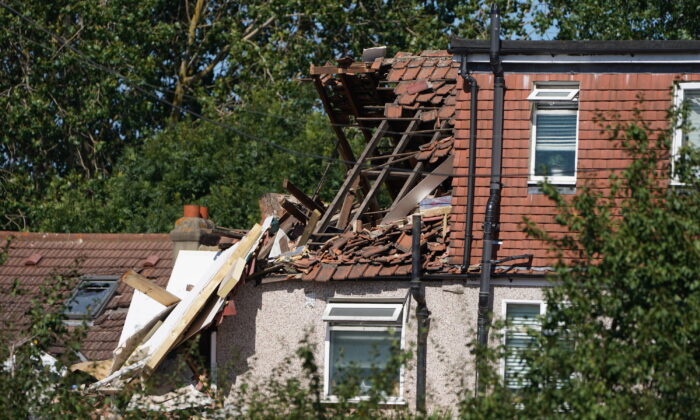 A young girl killed in a gas explosion in south London has been named locally as Sahara Salman as the community demanded answers over her “unnecessary” death.

Sahara, who was four-years-old, died after a terraced house collapsed in Galpin’s Road, Thornton Heath, shortly after 7am on Monday.

Three other people were also seriously injured in the blast.

Six to eight houses were damaged in the explosion, but around 80 homes were evacuated after the cordon was extended on Tuesday over fears for residents’ safety.

On Wednesday morning, Merton Council confirmed that the 200-metre cordon would remain in place on the advice of the Health and Safety Executive (HSE) and did not provide any further detail about when it may be removed.

The council said in a statement: “Southern Gas Networks also remain on site, and residents are reminded to stay away from the cordon area.”

Reverend Deji Ayorinde, who is helping co-ordinate the community efforts after the blast, told the PA news agency of the anger of the community following Sahara’s death.

Nick and Maria Hillman live about 40 houses down from the destroyed property and said there was a “strong smell of gas” on the street when they were evacuated on Tuesday, which caused concern that a spark of electricity would cause a second explosion.

They were ordered to evacuate by a police officer at around midday on Tuesday, and were given less than 10 minutes to leave their property.

‘A Strong Smell of Gas’

Mrs Hillman told PA: “Yesterday, at some point in the day, there was a strong smell of gas and I think that sort of the emergency services believed that if they allowed people to stay, they would have switched on the electric.”

The couple said that anger towards SGN continued to rise at a meeting of evacuated residents on Tuesday evening.

Mrs Hillman was concerned for her own home, as well as the possible risk to the lives of others, and said: “I was concerned that maybe not just my house, but other people could be blown up at some point because we weren’t sure if there was still a leak.

“But yeah, I guess I don’t think we’re ever going to stop feeling worried for a while.”

Some residents were also frustrated by the response from their insurance companies, some of whom Mr Hillman said were “disowning” those who had been forced to evacuate because of the explosion but who did not yet have any physical damage to their properties from the blast.

Mr Hillman said he waited an hour and 20 minutes for their insurers to tell them that “because there was no damage to our house, we could get nothing”.

He added: “I shall be changing my insurer as soon as all this is over.”

The council has provided assistance to more than 200 residents, including help with food and accommodation.

Local residents and businesses are bringing donations of clothes and toiletries to those who are displaced, and championship towels from the Wimbledon tennis tournament are also being donated by the All England Club’s Wimbledon Foundation.

A spokesman for SGN said: “We understand the local community has also been deeply affected by the serious incident and we’d like to reassure everyone we are working closely with investigators and assisting the emergency services.

“SGN will continue to have a presence on site in the coming days.

“Given the ongoing police investigation, we are unable to comment any further at this stage.”