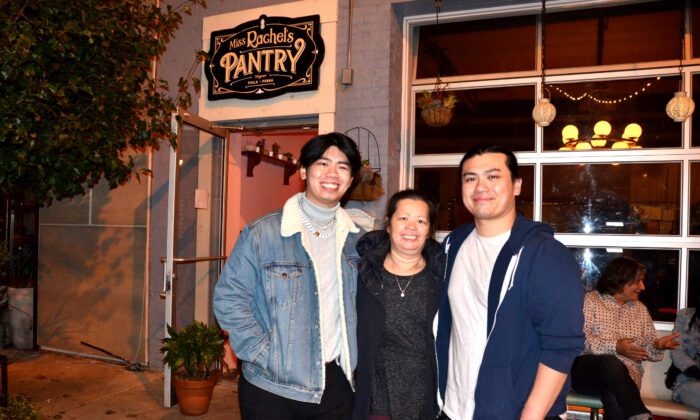 A Philadelphia couple battling health issues had to close their business temporarily. While they were struggling both financially and mentally, to their surprise, their customers and community stepped in with warm hearts and turned a merciless tragedy into a merciful story.

Since 2001, Andre Chin and Amanda Eap, immigrants from Cambodia, have owned Artisan Boulanger Patissier, a bakery in South Philadelphia. They have two sons, both studying at Temple University in Philadelphia.

Their happy and peaceful life derailed suddenly after both were diagnosed with cancer.

Andre was diagnosed with prostate cancer five years ago. After treatment, he was cancer-free for about four years, but it returned recently. Amanda was diagnosed with breast cancer in July 2021 and had surgery in September. So, they had to shut down their bakery, at least for the time being.

“I felt shocked. I felt like I couldn’t say anything. I was crying. I didn’t know what I could do,” Amanda told The Epoch Times about how desperately she felt at the time.

When the couple needed help the most, their customers and friends stepped in. Besides providing comfort and encouragement, they reached out in many ways to help the couple get through their hardship, according to Amanda.

Daniel Weber, one of the couple’s friends, has organized a GoFundMe campaign, which has raised more than $100,000.

The neighbors near the couple’s bakery bring dinner to them every night.

The landlord for their bakery waived the rent until “the day I start to open again,” said Amanda. “She helped me a lot. That has made me get through a lot and released my stress a lot.”

Rachel Klein, the owner of Miss Rachel’s Pantry in South Philadelphia, hosted a fundraising cocktail party on Nov. 1 to help the couple. It had live music, food from Conscious Culture, Rowhouse Grocery, Farm Art Products, and raffles. There were more than 70 people who purchased tickets at $75 each, according to the organizer.

“I am surprised so many people showed up today,” Amanda told The Epoch Times at the fundraising cocktail party. “I never thought a lot of people love us that much.”

Amanda may be surprised to see that so many people love them, but her customers are not.

“Everybody loves Amanda and Andre because they’re such good people besides being excellent bakers,” said Leonard Guercio, a retired manager from Temple University’s Digital Cinema Lab and a friend to the couple for 15 years.

“When you go into their bakery, you feel very welcome. It’s really like you feel at home. You feel like you’re among friends. And then when you eat their delicious food, you feel like, oh, I’m in heaven,” Guercio told The Epoch Times. “So that’s why I think people love them so much because they love people. They’re very friendly and welcoming people. They’re the kind that you’re proud to say to other people ‘these are my friends.’”

Klein echoed the same appreciation. She told The Epoch Times: “Andrea and Amanda work so hard. If you’ve ever been in the bakery, you can see them working every single day, working their butts off. And they’re just wonderful, dedicated people.”

As for the idea to host a benefit cocktail party, “I just thought we should help our small community,” said Klein. “I thought that we should work hard for the couple because they work hard to make the neighborhood happy and make nice things for everybody to have.”

The community’s kindness changed Nicholas Chin’s opinion about people. He is the couple’s older son who is studying pharmacy at Temple University.

“I am realistic with a lot of things. But I guess this is one huge thing that changed my opinion about people a lot,” Nicholas told The Epoch Times.

“A lot of the support from the neighbors and the customers helped a lot,” Nicholas said. He used to think they never really cared about his parents, but it was “surprising.”

“I’ve been just trying to do a lot of community service. Because people helped my parents out, I feel like I should also help people out in general,” Nicholas continued.

Amanda felt confident that their family would get through the ordeal and be back on track again with so much support from customers and the community.

“We will open it again and plan to invite all the friends and people supporting us to eat at my pastry for free for a couple of days,” Amanda told The Epoch Times. “I already made the plan for that when I get well.”

“I want to do that. We want to give back,” said Amanda.