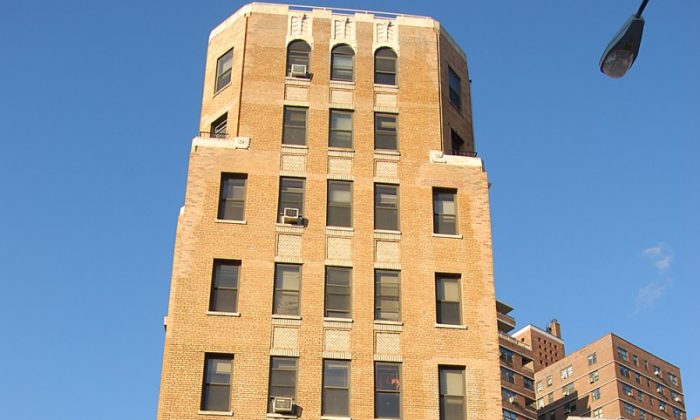 The Bialystoker nursing home in Manhattan's Lower East Side on Sunday. (Catherine Yang/The Epoch Times)
US

NEW YORK—A 70,000-plus-square-foot nursing home could be sold for $12million–14 million by the end of the month unless it’s declared a landmark, says Friends of the Bialystoker Home. A discussion on the history of the Bialystoker Home and what future plans may entail took place on Manhattan’s Lower East Side on Sunday.

“There’s no question that this building qualifies [to become a landmark] on its international, cultural, and historical significance … and its special architectural significance,” said Mitchell Grubler, a founding member of Friends of the Bialystoker Home, which formed after the announcement of the building’s closure.

The Bialystoker Home is currently registered in the National Registry of Historical Places, so a 40 percent tax credit would be available to the buyer. However, the board of directors advertised the building as a “development site,” and took down the advertisement last week, so community members are worried the board is in talks with a buyer who will demolish it.

Sam Solarz, the former president of the Bialystoker Home for 32 years, bought the two-story building adjacent to the home in the 1970s for $200,000, and last year the board sold the property for $1.5 million to the board’s current chairman.

Being a “Bialystoker” holds much more meaning than just being from Bialystok, Poland, says Rebecca Kobrin, author of “Jewish Bialystok and Its Diaspora.”

Before the building was turned into a nursing home, it was a “landmanshaftn,” or a “mutual benefit society” that provided welfare and social insurance to the Jewish community in the Lower East Side.

“It gave voice to the needs of the city and what the city stood for, and the city was seen as standing for social welfare,” Kobrin said. “And indeed this is why the Bialystoker Center then [devoted] itself to care for the elderly.”

Along with the connection to the city it provided to the Lower East Side Jewish community since its opening in 1931. Kobrin says the center supported culture by providing charity on an international level. Between 1919 and 1939, the center was involved in the collection of $9 million ($72 million adjusted for inflation) to rebuild the city of Bialystok, in Poland, adding hospitals, medical care, and banks.

“In 1927, as those who immigrated from this city realized that their own parents were growing older, they also wanted to transform New York,” Kobrin said. The immigrants collected money to transform the Bialystock Center into the 10-story nursing home it was until last year.

Panelist Elissa Sampson, a community member and doctoral candidate in Urban Geography gave a talk about the architectural history of the building and area. Sampson said that Art Deco was the “height of style,” and the vast history of both the architecture and what the center stood for “created more than a building.”