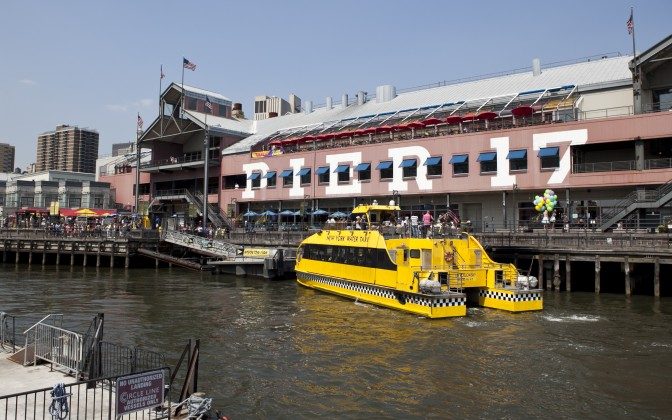 The Seaport, situated at Pier 17 at the foot of Fulton St. in Lower Manhattan, is undergoing a major redevelopment. The just-initiated demolition and rebuilding of the mall at Pier 17 is a key phase for the project. Numerous community members have long expressed concern that the developer, Texas-based Howard Hughes Corporation, has other plans for the area that are not being publicly disclosed.

Transparency in the planning process has been an especially sensitive issue because of the Seaport’s special historic status and the property rights of structures. All of the buildings and the land are owned by the city and are part of a special historic district.

Community groups and the community board have long argued that such status warrants greater public involvement.

Though concerns over the Seaport redevelopment have been ongoing for a few years, fears over two specific properties are at the heart of the board’s resolution. Plans for the New Market Building (which is just outside the historic district) and the Tin Building haven’t been made public.

Numerous Freedom of Information Law (FOIL) requests by community members and journalists, asking about the substance of those plans, have been denied. A request made by the Epoch Times was denied on the basis of protecting “trade secrets.”

Howard Hughes is currently in talks with the New York City Economic Development Corporation about the properties.

In addition to the resolution calling for more community involvement in a Seaport master plan, Community Board 1 plans to submit a FOIL request as well. Diana Switaj, director of planning and land use for Community Board 1 said Wednesday that they are in the process of making sure such a request would be legal. They will then amend the resolution to include the FOIL.

Switaj said that a FOIL request is somewhat unusual for the board, and “hasn’t been done in a few years.” She said the unique public nature of the land and buildings makes it a worthy endeavor.

As for the resolution, it will be sent on to Howard Hughes and the Economic Development Corporation for their consideration. It does not carry any legal weight, but is an expression of the community’s concerns.