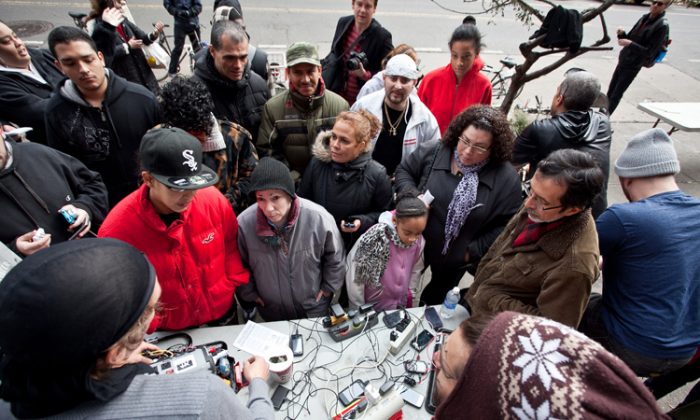 Lower East Side residents check the charging set up, with power coming from a generator, on Oct. 31, near the intersection of 13th Street and Avenue A. (Amal Chen/The Epoch Times)
US

Lower East Side communities, still working toward normalcy after Hurricane Sandy, gathered in pockets around generators on Wednesday.

With power still out during the day from the southern tip to 27th Street of Manhattan, businesses hooked up generators and residents whipped out power strips so phones and other devices could be charged..

“Everybody needs a phone,” said Eric Baker, who is staying at a friend’s house on Avenue B.

Baker and dozens of others crowded around a generator and a jumble of snaking power strips, phones, and phone chargers.

Two blocks east another group gathered around a generator—this one powered by a bicycle instead of gas.

The tandem bicycle was pedaled by teams of two for around five minutes each. The electricity surged from the pedals through cords and an adapter. It was good enough to power more than a dozen phones.