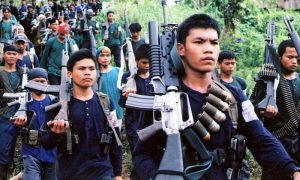 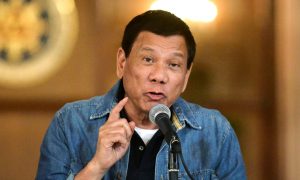 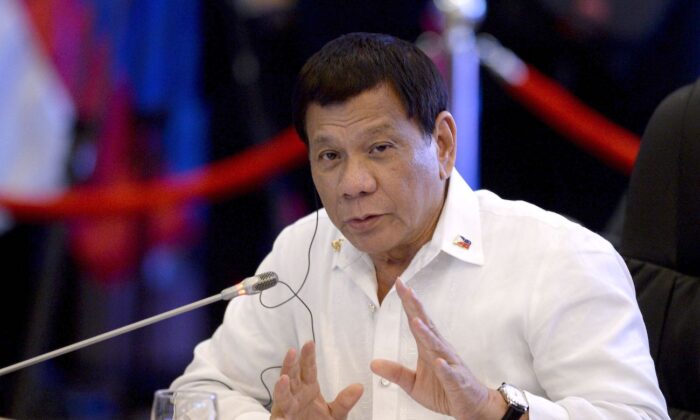 Philippine President Rodrigo Duterte on the sidelines of the 31st ASEAN Summit at the Philippine International Convention Center in Manila on Nov. 13, 2017. (Noel Celis/AFP via Getty Images)
Asia & Pacific

Communists Are Biggest Threat to the Philippines: Duterte

At a public briefing at Malacanang Palace in Manila, Duterte identified terrorism as “the number one threat to the country,” but dismissed the ISIS-linked group Abu Sayyaf as being among the prime threats and instead singled out “communists.”

“It’s not the Abu Sayyaf—not these terrorists of no value,” Duterte said, speaking partly in Filipino, according to a translated version of his comment by the Philippine Daily Inquirer. “The high-value targets are these communists.”

“That’s my order to the Armed Forces, to the soldiers, is: ‘Hit them,'” he added.

The Philippine president said that both Abu Sayyaf and the Communist Party of the Philippines (CPP) have taken advantage of the COVID-19 pandemic while local law enforcement agencies are more focused on tackling the pandemic. According to data gathered by Johns Hopkins University, 1,177 people have died due to COVID-19 in the south-east Asian country.

“This [the COVID-19 crisis] has been taken advantage of by these forces arrayed against us—the Abu Sayyaf, who are terrorists with no ideology, the communist party, with ideology, but more pernicious in effect, which could undermine the peace and security of our country,” Duterte said.

The Filipino president added that the insurgency by the CPP and its armed unit, the New People’s Army (NPA) “will place in jeopardy the democratic values the Filipinos have enjoyed for the longest time,” reported ABS-CBN, the country’s largest broadcast network.

The Filipino government has been continuing its efforts to stop terror activities such as kidnappings and bombing operations, according to the outlet.

Duterte is seeking to pass an anti-terrorism bill—House Bill No. 6875—which would amend the country’s Human Security Act of 2007 that he recently certified as “urgent.”

In a letter to Filipino politician House Speaker Alan Peter Cayetano, Duterte said that the bill’s passage is to “address the urgent need to strengthen the law on anti-terrorism in order to adequately and effectively contain the menace of terrorist acts for the preservation of national security and the promotion of general welfare,” the Philippine Daily Inquirer reported.

Duterte came to office in 2016 and is serving a six-year term.

More than 100,000 people have died in the conflict between the Philippine government and the CPP-NPA since 1969, with multiple failed peace talks across different administrations, The Diplomat noted in a recent article.

The article also noted that talks between the government under Duterte’s leadership and the CPP “have not led to any sustained progress beyond cycles of starts and stops.”