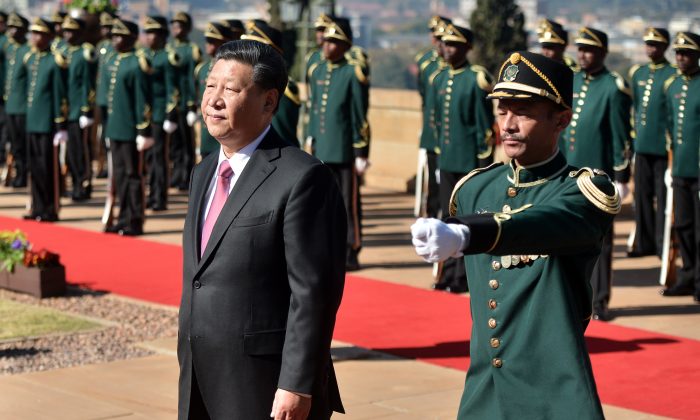 The Chinese Communist Party (CCP) is tightening its grip on South Africa on many levels.

The secretary general of South Africa’s ruling African National Congress (ANC), Ace Magashule, has announced that ANC cadres will be trained by the CCP before next year’s South African general elections. The ANC will be sending around 300 cadres to the CCP’s training academy to “learn more about party discipline and loyalty.”

According to Magashule, Chinese officials would be “employed to assist local government executives in implementing a powerful communications strategy.” Magashule reportedly said there was a lot to be learned from CCP expertise in “strategy and propaganda.”‎

BRICS is essentially the global redistribution of wealth through creating a leftist global economic alliance able to challenge, and eventually defeat, the United States and her allies.

During the conference, Chinese leader Xi, as part of the CCP’s “One Belt, One Road” initiative, pledged investments totaling $14 billion to help boost the rapidly failing South African economy.

Relations between China and South Africa have been steadily growing since Nelson Mandela’s ANC government came to power in 1994. Most of the key members of Mandela’s government (including Mandela himself) had been leaders of the pro-Soviet South African Communist Party. Mandela’s successor Thabo Mbeki and Jacob Zuma were also Communist Party members.

With the decline of Russian power in the early 2000s, South Africa’s communists and their ANC comrades looked increasingly to China, as both a market for their raw materials and as a strong political ally.

As a teenager, Magashule was a founding member of the revolutionary Congress of South African Students. He was arrested and charged with high treason in 1982 and subsequently detained several times under the apartheid-era Internal Security Act.

Comrade Magashule was a protege of the South African Communist Party leader, the late Chris Hani, but has never been proven to be a Party member himself.

However, Magashule has long been a leading advocate for China inside the ANC.

From June 1 to 8, 2018, Magashule led a delegation of the ANC National Executive Committee to China, to foster “party to party relations with the leadership of the Communist Party of China and reaffirming ties between the people of the two nation-states.”

Magashule explained the purpose of the visit to the comrades of the ANC Eastern Cape:

“Both our parties have appreciated the importance of political education, and the whole endeavor contributes towards party-building and renewal, and therefore agreed to work together concretely to achieve some of the strategic objectives. We have agreed to share the lessons and experiences which will help to grow the capacity of our political organizations.

‘The Leadership of the [CCP] has agreed to accommodate 300 ANC cadres into their leadership training academy over a five-year period. The exchange programme also includes holding political education sessions with some of their commissars inside our country.”

While China has been economically involved with Africa for decades, the CCP is clearly planning a more philosophical emphasis to its expansionism. If things go according to plan, the CCP’s ideological grip may soon extend to most of sub-Saharan Africa.

Only a week before the BRICS summit in Johannesburg, Magashule was a guest of honor at the founding of a new CCP training school in Tanzania.

Representing the ANC, Magashule said in a speech titled “Greatest Feat of Human Solidarity and Internationalism, for the Building of a New World Social Order,” given at the Sod Turning Ceremony of the Julius Nyerere Political Education School of Excellence in Tanzania on July 11, 2018:

“Our gratitude … extended to the leadership of the Communist Party of the Peoples Republic of China and the people of China for the revered gesture of building a political school, a treasure house, to strengthen the humane acts of the longstanding historical friendship and solidarity between the people of the African continent and the great Chinese nation.”

“Throughout the years of our long arduous struggle against the tyranny of imperialism and colonial oppression and exploitation, the Peoples Republic of China has given an insurmountable political, material, and diplomatic support for the most of the liberation movements in our continent and other parts of the world that has undoubtedly contributed immensely for the capacity of the liberation movement to liquidate the stranglehold of imperialism and colonial domination.”

“Our party organizations must be extended all over the country and must purposefully train tens of thousands of cadres and hundreds of first-rate mass leaders. They must be cadres and leaders versed in Marxism-Leninism, politically far-sighted, competent in work, full of the spirit of self-sacrifice, capable of tackling problems on their own, steadfast in the midst of difficulties and loyal and devoted in serving the nation, the class, and the Party.”

He then went on to preach global revolution:

“As a matter of historical necessity, it will be a center of excellence for ideological and theoretical ferment of the new African cadre of our times. An African cadre who will have the potentiality to halt the massive ideological onslaught by the forces of reaction against the world revolutionary movement.

“We are confident that in the Communist Party of China we have a loyal ally whose illustrious acts of solidarity remain the springboard of our continuous struggle for nation building and formation.”

At any given time during the Soviet era, there were up to 200 South Africans studying in seven yearlong revolutionary training courses at the Communist Party of the Soviet Union’s ultra-secretive “Lenin’s Institute for Higher Learning” in Moscow. These meticulously trained comrades formed the backbone of the South African Communist Party/African National Congress government that took over South Africa with Nelson Mandela in 1994. The Chinese communists understand, just as did the Soviets, that to control Africa, or the world, one must control the mineral riches and strategic sea lanes of Southern Africa.

The Chinese Communist Party appears to be emulating Soviet strategy. Now that the CCP is moving from a purely political/business approach to an ideological model, the need for training revolutionary cadres is urgent.

The CCP is intent on controlling the future. In order to accomplish their goals, the Chinese communists must control not just the world’s strategic resources, but also invest in the proper ideological training of the world’s young leaders.