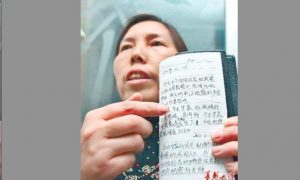 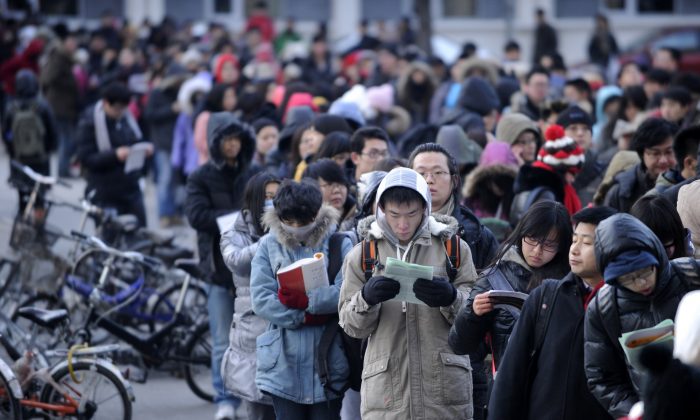 This photo, from Jan. 5, 2013, shows candidates waiting to enter into the exam room to sit the National Entrance Examination for Postgraduate (NEEP) at a university in Beijing. A new directive is ordering local education agencies and Party organizations at universities to strengthen the ideological and political education of young university instructors. (Wang Zhao/AFP/Getty Images)
China

China’s Ministry of Education on Monday published a directive on its website ordering local education agencies and Party organizations at universities across the country to strengthen the ideological and political education of young university instructors.

The circular, which carried the imprimatur of Party Central in Beijing, was aimed squarely at young people. It highlights the Chinese Communist Party’s (CCP) growing unease with their prolific use of the Internet, and facility in harnessing social media to expose the misdeeds of officials and join together for common causes.

The notice comes in the wake of an internal Party order to university administrators and professors known as the “7 Don’t Speaks,” which listed topics that were prohibited from being discussed in class, including issues like civil rights, civil society, and freedom of the press. The order was posted and widely circulated on China’s microblogging service, Sina Weibo, earlier this month.

“Both the seven taboos and the latest 16 advisories are new measures of stability maintenance the top leaders introduced because they are realizing there is an unprecedented political crisis, with the young generation being the most powerful threat that could topple the communist regime,” commentator Zhang Lifan told the South China Morning Post.

The recent educational directive, which listed 16 recommendations, noted that “strengthening and improving young teachers’ ideological and political thinking” is imperative because “young university instructors are close in age to their students, frequently interact with them, and have more direct influence on their thinking and actions.” It was jointly issued by the Organization Department of the Central Committee, the Ministry of Education, and the Propaganda Department on May 4, but was published online this Monday.

Constant reference was made in the notice to “improving political thought work” and “strengthening the study of political theory.” These are watchwords of communist doctrine that refer to inculcating strong adherence to and belief in Communist Party precepts, and loyalty to its rule.

These two recent directives targeting the youth population suggest the Chinese regime’s unease with their exposure and growing awareness of issues that the Chinese Communist Party (CCP) disapproves of—given the youth’s prolific use of the Internet.

“Both the seven taboos and the latest 16 advisories are new measures of stability maintenance the top leaders introduced because they are realizing there is an unprecedented political crisis, with the young generation being the most powerful threat that could topple the communist regime,” commentator Zhang Lifan told the South China Morning Post.

Wen Zhao, a Canada-based analyst of Chinese affairs with NTD Television, told The Epoch Times that this move by the CCP is to demonstrate that the Party still asserts its control over public opinion. “First, this is a kind of declaration, that is, the Chinese Communist Party will not only stubbornly hold onto its control over expression and ideology, but will continually strengthen its control. This is displayed for the rest of society to see, but also to those elements within the Party who are not resolute and firm in their Party ideology and loyalty.”

However, Wen believes that while the CCP’s attitude is more aggressive as of late, the Party does not enjoy a corresponding increase in its ability to control and censor. “From the Southern Weekend incident earlier this year, to the Masanjia [Labor Camp] being exposed in April, this year has shown that the CCP’s ability to control expression and ideology has been constantly challenged and weakened.”

In the first incident, journalists and editors at the iconic newspaper went on strike after the provincial propaganda chief overstepped the boundaries of acceptable censorship; in the second, a lengthy investigative report was published about torture at one of the most notorious labor camps in China, which primarily targeted practitioners of Falun Gong—discussion of which remains political taboo.

Wen Zhao said that as the CCP faces more challenges, more frequently, it will feel the need to test its grip over public opinion with such orders.

The prevalence of such ideological rhetoric is also raising doubts over the ability of the regime’s new leader, Xi Jinping, to bring about true reform, despite his calls for rule of law and upholding the constitution since taking power last November. “In front of the public, Xi Jinping wants to portray an open-minded image, but to certain people within the party, he will display a conservative side… Since he took power, his primary task is actually to promote economic reform in order to ease societal tensions, while consolidating his power.”

Scholars noted that in the first of the 16 points, reference was made to Marxist and Leninist ideology, Mao Zedong Thought, Deng Xiaoping notion of “socialism with Chinese characteristics,” and former Party leader Hu Jintao’s “scientific development concept.” But no mention was made of previous regime leader Jiang Zemin’s trademark theoretical contribution to the communist canon, the enigmatic “Three Represents.”

Yu Maochun, a scholar of Chinese politics, strategy, and history at the U.S. Naval War College, said he was “very surprised” by the omission. “Jiang Zemin’s work style was flamboyant, undisciplined, and boastful,” he said, adding that Xi Jinping may be distancing himself from such traits by leaving Jiang’s theory off the list. Ding Li, a researcher with Chinascope, a news service that translates and analyses Communist Party propaganda, said it was “extremely weird.” He added: “If this is not a mistake, the missing of the mention of the ‘three represents’ is equivalent to saying that Jiang Zemin is no longer qualified to leave his legacy in the Party’s history.”