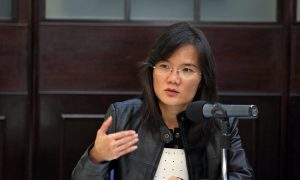 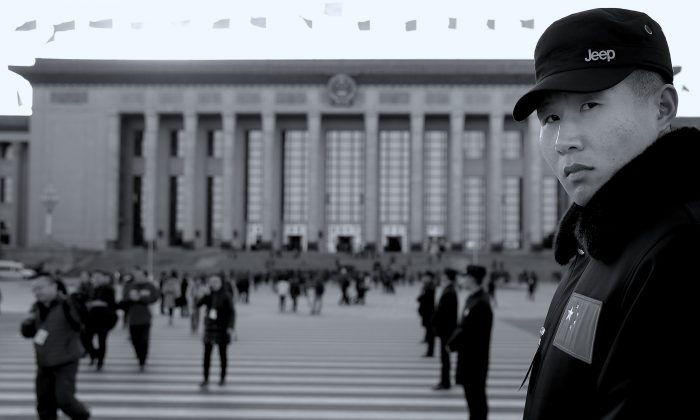 A plainclothes policeman guards outside Great Hall of the People after the opening session of the Chinese People's Political Consultative Conference (CPPCC) in Beijing on March 3, 2015. (Lintao Zhang/Getty Images)
China

All the regime’s leaders attended the opening session of the CPPCC at 3 p.m. in Beijing’s Great Hall of the People, including Xi Jinping, the Party boss, Premier Li Keqiang, and other members of the Politburo. Over 2,100 members of the advisory body later held their annual meeting.

The focus of the events this year was to continue “in-depth reform,” promoting the rule of law (with the Party in charge, of course), and “strengthening socialist democratic politics,” according to Yu Zhengsheng, the chairman of the advisory body. The bland political slogans are somewhat covered by the title The Four Comprehensives, which attempt to give a more meaningful aura to what are fairly pedestrian policy goals.

Yu declared in the CPPCC’s work report that China is going to “continue the anti-corruption campaign unswervingly,” in order to build a clean and honest Party and government. State-run media outlets pointed out that it was the first time in 20 years that the chairman of the conference has explicitly spoken of anti-corruption in such a work report.

Indeed, the anti-corruption campaign (also known as a political purge) led by Chinese Communist leader Xi Jinping has removed a huge number of extremely powerful officials in the past two years, and has reshaped and recentralized the Chinese political system in a manner that many observers considered impossible as recently as 2012.

The anti-corruption storm seems to be blowing only stronger this year with even higher level officials possibly being targeted. On a press conference on March 2, the representative of the CPPCC Lu Xinhua told Chinese media that no one is excluded from the campaign.

“We deeply believe that no one will escape, no matter what kind of tiger they are,” Lu said, echoing remarks by Xi, which provided “tiger” as a metaphor for high level officials and “fly” for lower level ones.

Combined with the CPPCC session, the opening of the National People’s Congress of the Communist Party will open on March 5; the two sessions will be wrapped up by March 13, according to the state-run Xinhua.

Despite the attempts at relentless good news by the political authorities, Chinese people from around the country still streamed into Beijing to voice their complaints against the Communist Party.

It’s a scene almost as established as the meetings themselves: a huge number of Chinese petitioners took the yearly political event as a chance to express their grievances, unsolved through China’s petitioning or legal system. These complaints usually relate to the entrenched corruption of local-level officials, who forcibly demolish houses while acquiring land to sell to real estate developers.

Around 5,000 petitioners from around China gathered on Monday in protest in front of the State Bureau for Letters and Calls, which handles citizen complaints, according to 64tianwang.com, a civil human rights information website. That number is likely a fraction of the total number of petitioners that are expected to flood into Beijing to lodge their complaints during the current period. Many more were intercepted and sent home by police, while others were placed under house arrest and couldn’t even get on the train for the trip to Beijing.