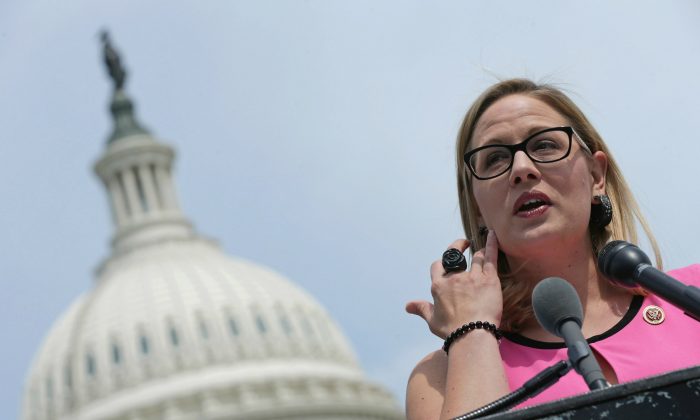 Rep. Kyrsten Sinema (D-Ariz.) joins a group of bipartisan Congressmen during a news conference outside the U.S. Capitol May 20, 2014 in Washington, DC. (Chip Somodevilla/Getty Images)
Viewpoints

The Communist Party USA is involved in campaigning on behalf of U.S. Senate candidate Kyrsten Sinema, a Democrat from Arizona.

According to Joelle Fishman, head of the Communist Party’s powerful Political Action Commission, the party has injected itself into races “in two states where a Republican seat can be flipped: AZ (Flake open), TX (Cruz).”

While representing her Phoenix district in recent years, Sinema has portrayed herself as a moderate, even as a slightly conservative Democrat. Sinema, however, is an ardent leftist.

While angering many of her previous progressive colleagues for her willingness to work with Republicans on occasion, some Arizonans attribute her new image more to ambition than ideological conversion.

In a recent profile by a student newspaper at Sinema’s alma mater, Arizona State University, political science major Judah Waxelbaum “described Sinema as a very progressive Democrat that does a really good job marketing herself as a moderate.”

“I think Kyrsten Sinema is as far to the left as it gets. She is the definition of a modern progressive Democrat. It doesn’t get any further to the left,” Waxelbaum said.

Several profiles have dealt with Sinema’s early 2000s flirtation with the Green Party, her “peace activism,” and her apparent disdain for Israel.

However, few have raised an eyebrow with respect to Sinema’s demonstrable ties to the Communist Party USA.

Sinema was a signatory to an advertisement, “May Day and Cinco de Mayo greetings,” placed in the Communist Party USA paper People’s Weekly World, on May 4, 2002.

Such ads were traditionally placed in the Communist Party paper every May Day, sponsored by local party clubs, members, or supporters. Almost all signatories could be identified as Communist Party USA members.

This support for the communist cause was not a “one-off” or an aberration. In 2003, Sinema again affixed her name to the Arizona Communist Party’s May Day greetings page.

Shortly after her election in 2004, Sinema and former state Rep. Steve May formed Arizona Together, the statewide coalition designed to legalize gay marriage in Arizona.

In the two years leading up to the 2006 election, Sinema was pivotal in raising almost $3 million and enlisting partners for the effort, which succeeded. Arizona became the first state in the nation to reject a constitutional ban on same-sex marriage on Nov. 7, 2006.

Tucson-based Arizona Communist Party leader and Arizona Together activist Joe Bernick wrote at the time: “Why Arizona? How come voters in more liberal states have voted for similar hateful laws while conservative Arizona voted no?

“Arizona Together lived up to its name. It was able to defeat 107 because its educational campaign showed working-class Arizonans that this was an attack on working people.”

Bernick continues to back Sinema. He wrote on the People’s World website on Sept. 25: “Two Congresswomen, Democrat Kyrsten and Republican Martha McSally, are in a race to become Arizona’s first woman senator.

“Arizona is full of retirees from all over, many who were in school during the Vietnam War period. I can’t imagine they are very threatened by someone who went to peace demonstrations when in college. It also appears that the national Republican practice this fall is every Democratic candidate for governor or Congress is a socialist, communist, radical, far left, and extreme.

“Sinema was, indeed, part of the people’s movement, losing her first election running as a Green.“

The phrase “part of the people’s movement” is often used in communist publications as a dog whistle for “one of us.”

Currently slightly ahead of her Republican opponent Martha McSally, Sinema is favored to prevail in November. Before the election, Sinema needs to face some hard questions about her well-documented past, and current Communist Party ties.