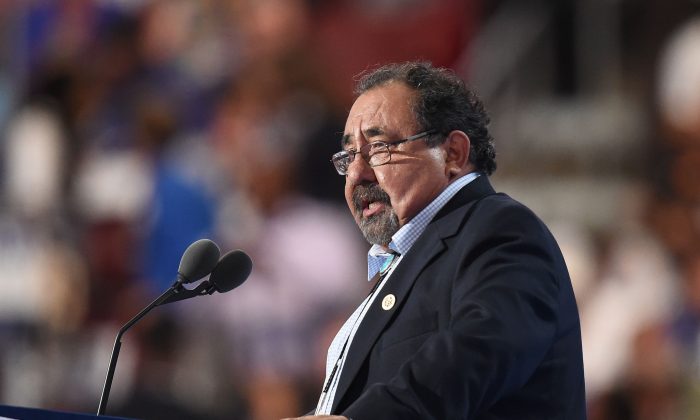 US House Rep. Raul Grijalva (D-Ariz.) speaks during Day 1 of the Democratic National Convention at the Wells Fargo Center in Philadelphia, Pennsylvania, July 25, 2016. Grijalva is likely to be the next chair of the House Committee on Natural Resources. (ROBYN BECK/AFP/Getty Images)
Viewpoints

In this position, he will be able to stall and otherwise influence legislation and create major uncertainty for potential infrastructure, natural resource, and energy investors.

Grijalva is so excited about his new post that he has even opted to resign from his influential position as co-chair of the far-left Congressional Progressive Caucus.

Allowing a man with Grijalva’s radical record to wield such influence could have disastrous implications for American jobs and economic growth.

Grijalva foreshadowed his legislative strategy in 2013 when he revealed to In These Times, a Democratic Socialists of America affiliated publication, that “I’m a Saul Alinsky guy,” referring to the “community organizer” who mentored Hillary Clinton and inspired Barack Obama.

But even the Marxist Alinsky wasn’t Grijalva’s most radical influence.

According to a 2009 Center for Immigration Studies memorandum, as a young activist in Tucson, Arizona, Grijalva became a leader in several Marxist-leaning groups including the Chicano Liberation Committee, which pressured the University of Arizona to implement affirmative action for Chicano staff and establish a Mexican-American Studies program.

Grijalva was also active in Movimiento Estudiantil Chicano de Aztlan (MEChA), which agitated for the return of the “Chicano” areas of the U.S. Southwest to Mexico. The group’s motto was “Por la raza todo, fuera de la raza nada,” which translates to “For the race, everything; outside the race, nothing.”

Grijalva further joined the radical Raza Unida Party. After losing a school board race in 1972, Grijalva dropped some of his revolutionary posing and sought to involve himself in more “mainstream” Democratic Party politics.

In 1993, Grijalva, identified at that time as a member of the Pima County Board of Supervisors, wrote an anti-NAFTA article headlined “North America Needs ‘Fair’ Trade” for the Nov. 13 edition of the Communist Party USA’s newspaper People’s Weekly World (which has since changed its name to People’s World).

Through the 1990s, Grijalva used his Pima County position to assist Communist Party USA-affiliated organizations, such as the Southern Arizona People’s Law Center and the Tucson Tenants Union.

By the early 2000s, Grijalva was ready for the big time, and the Communist Party USA was eager to help.

The article continues: “Pastor and Grijalva are Arizona’s first two Mexican Americans [sic] members of the U.S. Congress. But Torrez ran for Congress before they ran, and also boldly ran against Republican Senator Barry Goldwater.

“‘Lorenzo told us it is time for these majority Latino districts to be represented by a Mexican American,’ said Valencia. ‘He wanted voters to see a Latino name on the ballot.’

“When Pastor declared his candidacy, Torrez rallied the Tucson CP [Communist Party] club to join in the effort. Pastor’s victory in 1991 set the stage for Grijalva’s election in 2002.”

“The tireless efforts of hundreds of grassroots volunteers dealt a blow to the corporate establishment here and their attempt to dominate Southern Arizona politics in the Sept. 10 primary election.

“The Grijalva campaign was a textbook example of how to conduct a people’s campaign, beginning with its name: ‘A whole lot of people for Grijalva.’ Hundreds of people came out seven days a week, sometimes twice on Saturday, to wear out tons of shoe leather.

“Grijalva thanked labor for its key support and for ‘putting the union label on me.’ He promised the Southern Arizona Central Labor Council, at its Sept. 12 meeting, to become ‘an extension of the voice of labor in the U.S. Congress.’”

At a meeting of the National Board of the Communist Party USA in South Chicago, on the last weekend of January 2003, an Arizona activist boasted, “Using street heat tactics, all of labor worked to back one candidate Raul Grijalva in Tucson … And we won!”

“Nevertheless, here in Tucson, we are gearing up for local elections in 2003 and the presidential election ahead in 2004 by using the same tactics we did in 2002 to get Raul Grijalva elected to Congress. …

“Congressman Raul Grijalva is proving to be a wonderful voice for the people of Arizona. And our movement and those important connections made during his campaign are still alive in Tucson.”

In Congress, Grijalva worked to help the Communist Party USA where he could.

According to a 2005 statement by Latinos for Peace (an anti-Iraq War front for the Communist Party USA) published in the Communist Party USA theoretical journal Political Affairs on Oct. 4, 2005: “On Monday September 26 we participated in the peace movement lobby day at the capitol. We met with Rep Raul Grijalva who said he would work to help build our campaign.”

On July 13, 2006, Communist Party USA member Carolyn Trowbridge addressed 14 fellow black-shrouded members of the “peace” group “Raging Grannies” along with 40 supporters. Trowbridge’s speech was followed by “a reading of an antiwar speech” by Grijalva. They then marched to the late Sen. John McCain’s office to “deliver a petition on Iraq demanding an immediate end to the U.S. occupation, the closing of all U.S. military bases and the removal all U.S. mercenaries and corporate involvement,” according to People’s World.

Later that same year, on Nov. 7, Arizona voters became the first in the nation to reject a constitutional ban on same-sex marriage. The campaign was led by activist group Arizona Together. Both Arizona state Rep. Kyrsten Sinema and Congressman Grijalva assisted the campaign.

According to Arizona Communist Party leader and Arizona Together activist Joe Bernick, who wrote it up in the People’s World:

“Why Arizona? How come voters in more liberal states have voted for similar hateful laws while conservative Arizona voted no?

“So how did we do it? The answer is: educating, organizing and mobilizing.

“As soon as proponents started circulating petitions to put 107 on the ballot, opponents brought out their own clipboards, signing up thousands of volunteers. Arizona Together emerged as the campaign committee, chaired by progressive state Rep. Kyrsten Sinema.

“Congressman Raul Grijalva appeared on radio ads calling Prop. 107 an attack on working families. The Grijalva campaign worked closely with Arizona Together, using its literature in their extensive door-to-door canvassing.”

The rally was organized by Tucson Communist Party member and high school teacher Ray Siqueiros, one of the most militant teachers in Tucson. In 2006, Siqueiros was involved in organizing a mass walk-out by Tucson high school students protesting proposed legislation that would classify illegal immigrants as felons. Some of the students waved Mexican flags.

In June 2015, Siqueiros received a Certificate of Special Congressional Recognition from Grijalva for “valuable service to the community.”

S750, if passed, “would exclude new surveillance installations and other border patrol activities from environmental protection laws. The bill would apply to federal lands within 100 miles of the U.S.–Mexico border in Arizona and parts of California,” according to People’s World.

Grijalva was apparently willing to work with the Communist Party USA to stop legislation designed to keep America’s borders secure.

Then the senior Democrat in the House’s Subcommittee on Public Lands and Environmental Regulations, Grijalva fought back against the proposal.

According to People’s World, Grijalva said in part: “It’s a two pronged agenda. … Part of the agenda … [is] to end any legislative hope … that we would end up with something semi-rational in terms of comprehensive immigration reform because this bill is about enforcement only—only enforcement. …

“The other agenda is about attacking bedrock environmental laws that have been on the books for 50, 40, 45 years. … It’s both about immigration and the environment and citizen accountability and participation in decision making.”

As today’s Communist Party USA is loyal to Cuba, China, and Venezuela, Grijalva was effectively attempting to aid and abet enemies of the Republic.

The Communist Party USA is the sworn enemy of American capitalism.

Houston Communist Party leader Bernard Sampson wrote only this past September: “We aren’t like other parties. We are a party dedicated to the overthrow of the capitalist class in this country.”

Yet Grijalva has worked with these people for more than 30 years. He is clearly fully on board with the Communist Party USA agenda.

Imagine the damage Grijalva will be able to do to America’s economy, environment, and national security as Chairman of the House Committee on Natural Resources. Communist Party USA leaders must be rubbing their hands in revolutionary glee.

Americans likely do not realize that elected officials such as Grijalva are not required to undergo any form of background security check before serving on sensitive committees. If they were, Grijalva would certainly fail.

America’s enemies are aware of this loophole and are using it to their advantage.

Trevor Loudon is an author, filmmaker and public speaker from New Zealand. For more than 30 years, he has researched radical left, Marxist, and terrorist movements and their covert influence on mainstream politics.