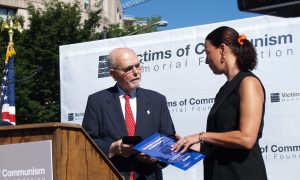 Remembering the Victims of Communism—for Them, and for Us
0
Share Now
FacebookTweetParlerEmail
Copy Link 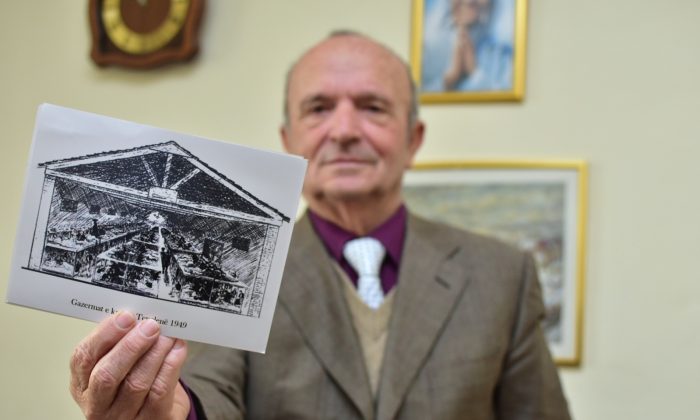 Simon Mirakaj holds the drawings from Tepelena camp in his office. (Antonio Çakshiri for The Epoch Times)
Europe

Communist Concentration Camps of the Past Haunt Today’s Albania

TEPELENA, Albania—Simon Mirakaj was 4 years old in 1949 when, together with his mother and two siblings, he was transferred to an internment camp a few miles from the town of Tepelena in southern Albania.

His family’s odyssey of displacement first started in July 1945, when the communist government of Albania, headed by dictator Enver Hoxha, deemed them enemies. This was because Mirakaj’s father and uncles had been fighting communists in the countryside, sparking the regime’s anger.

The camp in Tepelena was like nothing they had seen before. It was set in abandoned military barracks built by the Italian army during the Greek–Italian war of 1940 and was surrounded by barbed wire fencing.

“It was clearly a concentration and extermination camp, the same as Auschwitz built by German Nazis. For me, its opening was a strategic move by the regime to wipe out the families of those declared enemies,” Mirakaj said.

Albania was ruled by communism from the end of World War II until 1991. For about 46 years, the country of 3 million experienced one of the harshest regimes of Eastern Europe—one that isolated it completely and stripped all personal freedoms from its people. About 60,000 were put in camps, 18,000 imprisoned for political reasons, and more than 6,000 were executed.

The Tepelena camp opened in 1948 and, by the beginning of the 1950s, held around 3,000 people—mainly women, children, and the elderly. The dire conditions led to disease and death, and soon, it became infamous for high death rates. An estimated 300 children died there.

For unknown reasons, the camp closed in 1954 after six years of operation, and those held there were distributed to other camps throughout Albania.

Mirakaj is now a member of Albanian Authority for Access to Information on Ex-Sigurimi Files, the body established in 2015 to open up the secret police files of the communist regime.

It was this authority that took the initiative in 2017 to turn Tepelena into a museum complex to honor those Albanians who had been put into forced labor camps. The initiative received the green light from local authorities, and as a first move, 300 cypress trees were planted on the grounds in memory of the children who lost their lives.

In November 2018, the Albanian Ministry of Culture approved construction of the “children’s memorial,” considered the first step in transforming the camp into a museum complex.

But not everyone was enthusiastic about this approach. In March 2018, Albanian historian Pellumb Xhufi caused a stir when he said during a televised interview that there was no comparison between Tepelena and Nazi concentration camps, and that a CIA document he had seen depicted conditions at the camp as “not bad.” He also questioned whether 300 children had died there.

In addition, those who had served as officials in the communist state or are nostalgic about communist ideals have said the idea of turning the camp into a museum is irrelevant.

This stance, along with Xhufi’s comments, drew outrage from former camp inmates and their families.

However, the Authority for Access to Information on Ex-Sigurimi Files remains firm on the project. It has started to gather—from the communist archives and from those who are still alive—information and testimonies regarding Tepelena and other camps, which will be part of the display at the museum.

Among the authority’s most exciting discoveries are drawings by painter Lek Pervizi that depict life inside the camp barracks. His work is helping the authority recreate the camp’s original setting for the museum.

Mirakaj believes that when the museum is completed, the various artifacts on display will help people understand the true and vile nature of the communist camps.

“The creation of the museum is a necessity. If you forget history, it will repeat itself, and we cannot let this happen again,” he said.