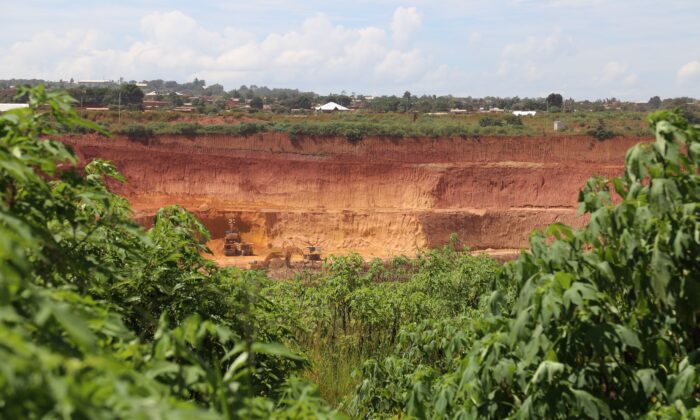 General view of the copper and cobalt mine of Kolwezi, Congo, on Feb. 14, 2018. The Democratic Republic of Congo is the leading cobalt producer providing 67 percent of the increasing global demand. (Samir Tounsi/AFP via Getty Images)
Viewpoints

In 2016, the Hague’s international tribunal ruled that China had seized islets and “sea features” in the South China Sea belonging to the Philippines. It had also plundered Filipino fishing resources.

The ruling invoked the U.N. Convention on the Law of the Sea, a treaty China had signed. Yet Beijing ignored the verdict. Chinese diplomats contend that in Southeast Asia, China is recovering “stolen” territory.

That defense is rubbish—propaganda to blur a wicked case of aggression by an imperial great power (China) at the expense of a weak neighbor.

Human rights groups insistently bewail the fact that corrupt African politicians are easy targets for political manipulation and bribery by wealthy countries and corporations. Mineral-rich countries with corrupt governments, such as the Democratic Republic of Congo (Congo) and Zambia, are particularly vulnerable.

The prescient critics got this right: China’s strategic goal wasn’t development, but guaranteed access to natural resources to supply its industrial economy, especially with strategic minerals found in Congo such as cobalt and coltan (refined tantalum).

Manufacturing mobile phones and computers requires coltan. Producing rechargeable batteries requires cobalt. China makes many electric vehicles (EVs), but one has special political importance: “city-town” mini-EVs. Domestic demand is huge. The deal the Chinese Communist Party has made with the Chinese people is that they get modern goodies if they don’t challenge CCP control.

Congo’s so-called China Deal is a detailed and hideous example of the CCP dictatorship’s self-serving and ultimately malevolent imperialism in Africa.

In 2008, Congo’s then-government, led by the authoritarian and corrupt Joseph Kabila, signed a deal with two state-owned Chinese firms. The companies were supposed to build roads, hospitals, and other infrastructure in exchange for a 68 percent stake in a huge Congolese copper and cobalt venture. Published estimates of the deal’s value ran from $6.8 to $10 billion.

They were more than unfair: They were corrupt. In late 2021, a leaked report claimed that a subsidiary China Deal contract was used to distribute $55 million to senior members of Kabila’s government. According to a media report, the bribe plot used shell companies that made the operation appear legitimate. State-owned Chinese companies are in thrall to the CCP. That implicates Beijing.

Late in 2021, we learned that in 2017 the Kabila government agreed to secretly amend the China Deal. The amendment accelerated payments to Chinese financiers and slowed the pace of infrastructure investment. In other words, communist China got money before doing the required construction in Congo.

The leaked 2021 report alleged that China has invested less than 1 billion dollars in infrastructure projects, about half of what should have been invested by 2021.

The people of Congo are being cheated, and one of the cheats is China.