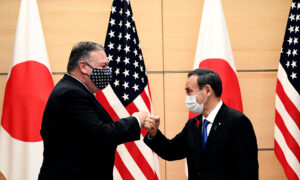 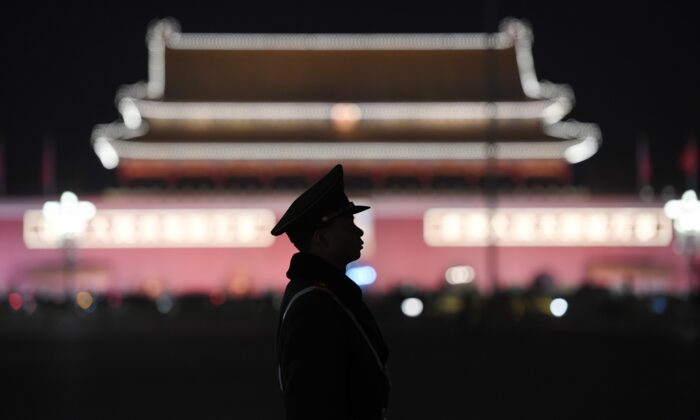 A paramilitary police officer stands guard in Tiananmen Square after a plenary session of the National People's Congress in the adjacent Great Hall of the People in Beijing on March 11, 2018. (Greg Baker/AFP via Getty Images)
Canada

For decades, the CCP has been using ‘unrestricted warfare’ to weaken allied Western nations, including Canada, from within
By Omid Ghoreishi and Bowen Xiao
Print

Stealthily and with sweeping precision, the Chinese Communist Party (CCP) has been waging a decades-long war against the West to achieve world domination by utilizing a military strategy known as “unrestricted warfare.”

Unbeknown to most of the population, the CCP has infiltrated almost every major avenue of life in countries like the United States and Canada—leaving virtually no industry untouched. While this threat has largely existed undetected, the effect it has had on the targeted nations, as well as its geopolitical consequences, are far-reaching.

Skirting the traditional, direct military confrontation offensives that have become somewhat outdated in modern times, this unconventional strategy has become central to the communist regime’s approach to warfare.

The strategy is highlighted in the 1999 book “Unrestricted Warfare,” authored by two Chinese air force colonels—Qiao Liang and Wang Xiangsui—and published by the People’s Liberation Army, the armed forces of the CCP. The book, which has been translated into English, is based on the original army documents.

Beijing uses an array of subversive tactics, including but not limited to propaganda warfare, culture warfare, memetic warfare, front operations, political infiltration, technological and telecommunications warfare, legal warfare, economic espionage, education espionage, cyberwarfare, and sanctions warfare. The regime employs all of these to varying degrees simultaneously in multiple sectors of society in order to undermine or influence the targeted country.

In 2014, Chinese state-sponsored hackers infiltrated the computer networks of Canada’s National Research Council. The attack cost Canada hundreds of millions of dollars. Canadian telecom giant Nortel, which filed for bankruptcy in 2009, was the subject of massive years-long IP theft by Chinese hackers, according to the company’s former senior security adviser Brian Shields. Shields is convinced that the beneficiary of the IP theft was Chinese telecom giant Huawei, which started to prosper in global markets around the same time Nortel was going bankrupt.

In a recent speech, Britain’s Chief of the Defence Staff General Sir Nick Carter said Beijing is aiming to defeat the West “using attacks below the threshold that would prompt a war-fighting response.”

To counter this threat, Carter said the British Armed Forces have adopted a new “Integrated Operating Concept.” The strategy, which marks a significant shift in military thinking, is a response to the advancing technology and non-traditional tactics, such as disinformation campaigns, used by adversaries.

A 2018 report on a workshop organized by the Canadian Security Intelligence Service says Beijing is utilizing a “multi-dimensional strategy to lift China to global dominance.”

The Canadian parliamentary watchdog that oversees national security, the National Security and Intelligence Committee of Parliamentarians, said in its 2019 annual report that Beijing maintains “significant and sustained foreign interference activities” in Canada.  This includes targeting the diaspora, seeking to corrupt political processes, manipulate Canadian media, and influence discourse on Canadian campuses in its favour.

The committee pointed out similar threats in its 2018 annual report, saying China is conducting “espionage and foreign influence activities in Canada.” The report added that China is among the most active foreign state actors trying to access Canadian government networks and the communications of federal government officials.

According to Conservative MP Garnett Genuis, the gravest security threat the free world faces is ongoing efforts by the Chinese regime and other non-state actors to influence elites and take over control of democratic institutions for their own purposes.

“There’s a need for a broader recognition of the risk … a recognition of the fact that elites at every level are subject to efforts at this kind of co-opting, whether it’s school boards, small-town mayors, university presidents, individual members of Parliament—there’s a lot of attempt at this kind of influence,” said Genuis, a member of the Inter-Parliamentary Alliance on China, an international cross-party group of legislators, in a recent interview.

“While this may not be a cold war, it is in some respects an asymmetric war with a front on intellectual property, academics, trade, human rights, and pretty well the entire panoply of relational elements between one nation and another as China asserts its colonial status,” said McKay, chair of the Standing Committee on Public Safety and National Security, in a parliamentary session in December 2019.

While some of Beijing’s tactics such as its long history of intellectual property theft and unfair trade practices are more obvious, others that use what Chinese officials have called “soft power” are harder to detect.

One such avenue is its CCP-backed Confucius Institutes, which infiltrate and operate on university and college campuses in Canada and other countries in order to boost the regime’s image. It also aims to push a foreign policy goal of making the regime not only an economic superpower, but also a cultural one.

Other examples are more blatant, such as a former chair of Harvard University’s chemistry department being recently indicted for making false statements about funding he received from China, and a Chinese citizen in the United States who was found guilty of economic espionage, theft of trade secrets, and conspiracy.

In the latter case, a man identified as 41-year-old Hao Zhang was found to have attempted to steal trade secrets from two U.S. companies “for the benefit of the People’s Republic of China,” according to the U.S. Justice Department. Zhang stole information specifically related to the performance of wireless devices.

The Thousand Talents Plan, one of the more widely known CCP talent recruitment or “brain gain” programs, encourages theft of intellectual property from government institutions, according to the FBI. By offering competitive salaries, state-of-the-art research facilities, and honorific titles, these programs lure talent from overseas to China, “even if that means stealing proprietary information or violating export controls to do so,” the bureau states.

The Globe and Mail said in an August report that it has found at least 15 Canadian academics who have taken part in the Thousand Talents Plan. These experts specialize in the fields of quantum computing, advanced electronics and engineering, vaccines, chemistry, and artificial intelligence.

One of the key organizations the CCP uses for influence operations abroad is the United Front Work Department. This unit coordinates thousands of groups to carry out foreign political influence operations, suppress dissident movements, gather intelligence, and facilitate the transfer of other countries’ technology to China, according to a June report by the Australian Strategic Policy Institute.

FBI Director Christopher Wray testified in 2018 that the bureau was attempting to view the danger posed by China “as not just a whole-of-government threat, but a whole-of-society threat on their end.” To counter China’s strategy effectively, Wray said the United States must also employ a “whole-of-society response.”

U.S. officials have also begun to realize the national security threats posed by Chinese telecom giants Huawei and ZTE. In June, the Federal Communications Commission (FCC) formally designated Huawei and ZTE as national security threats, thus banning access to money from the FCC’s US$8.3 billion a year Universal Service Fund to buy or modify any equipment or services produced or provided by these two suppliers.

Chinese-owned TikTok, which has seen meteoric growth in North America, was also recently found to be secretly reading users’ clipboard data, although the app now claims that it has fixed the issue. There are similar concerns about Zoom, as researchers with the University of Toronto’s Citizen Lab found that encryption keys were being transmitted to servers in China.

This summer, Washington announced that it is banning TikTok as well as Chinese social media WeChat, citing national security concerns. TikTok is racing against time to sell its U.S. business to an American firm, while both companies have launched legal challenges on the ban.

Meanwhile, Canada has not made a decision on whether to ban Huawei from its 5G networks. Three of Canada’s five allies in the Five Eyes intelligence group—the United States, Australia, and New Zealand—have already banned Huawei from their 5G networks, while the U.K. has established a plan to phase it out. The United States has threatened that it may limit intelligence sharing with Canada if Huawei is not excluded, fearing that its own data may be compromised if it’s shared on Canadian networks.