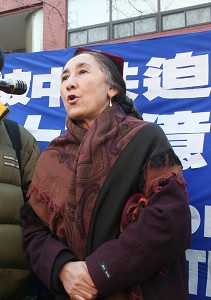 At the 2006 International Human Rights day, Toronto's Amnesty International democratic organizations and individuals who have been persecuted by the Chinese Communist Party (CCP) protested in front of the local Chinese consulate. The groups included Canadian Uyghur, the Tibet association, Falun Gong practitioners, Formosan Association for Public Affairs who gathered together to protest against the communist regime's persecution of them. Rebiya Kadeer a former member of the Chinese communist Political Consultative Conference (PCC), once ranked the fifth richest in mainland China, and an Uyghur's human rights leader, came especially to Canada to expose to the world how the CCP deceives the Uyghur people.

Note, Xinjiang is the autonomous region for minority races including Uyghur

Promise of Autonomy was a Lie

Rebiya Kadeer said, the CCP guaranteed the autonomy of Xinjiang Uyghur in 1955. But now, the CCP transfers Uyghur youths aged 17 to 27 to China's inland schools, to stop them from staying in the local Uyghur regions to be educated. “We have many resources to educate our youth and instead the CCP forces them to other places. Most Uygur college graduates are unable to find a job, but the Han race people from other place have jobs.”

Kadeer said that through many political persecutions, such as the land reform in 1952 in which many rich farmers were killed, and the attack on Uyghur intellectuals in 1957, Uyghur people lost the right to develop their own economy, culture, language, and education. Being unable to control their own resources, Uyghur were arrested whenever they tried to make use of these resources.

In 1997, Kadeer saw thousands of young people marching to petition the government in Yili city. She said, “They were very peaceful, but were gunned down and arrested. I cannot bear this; I can not bear this kind of atrocity at all.”

Former Member of the PCC advocates for Uyghur human rights

Kadeer was elected as a member of the eighth PCC in 1993. Kadeer said, “The CCP proclaimed racial unity, peace and development which, at that time I believed, because our race is particularly kindhearted. I felt very happy that I was our people's representative. My purpose of being a member of the national PCC is to advocate the Uyghur's human rights situation and to improve our people's present oppression.”

Kadeer said that at that time the CCP central high-ranking official told her that her opinion was so good that they were going to implement her ideas, and it was the lower level officials who did not carry it out well, but that there was no problem with the party central. At that time she trusted them so much that she went back to broadcast the information to the Uyghur people in a grand scale, and told them it was the local officials that had problems, not the central government, and the political prisoners would be released. But many years later, Uyghur still do not have the freedom of speech, associations, and economy. Uyghur have lost our own language, culture, and education. “Finally, I was viewed by my own people as a cheater, because I believed in the CCP,” said Kadeer

Later, because Kadeer supported the Uyghur people's movement for freedom, democracy, religion, and culture, she was arrested by the CCP right after meeting with the visiting US Congress delegates in August 1999. In March 2000, she was sentenced to eight years imprisonment for the crime of “Illegally providing national intelligence to a foreign organization”. She was rescued to the U.S. after serving 6 years.

Whoever disagreed with the CCP would be considered as a terrorist

Kadeer said, “Any Uyghur person who disagreed with the CCP in any way would be branded as a terrorist, extremist or part of a separatist group. Uyghur people in the proposed Xinjing autonomous region all wished to live with the Han people in peace, but the CCP simply deceived all of the people and did not allow them to live in harmony.”

Kadeer believes that for a country to be prosperous and strong, the first thing is to serve well its people. But since the CCP became strong economically, they used people's labor force to develop military power, suppress minorities and dissenting people, and suppress their own Chinese people. This kind of governing will not last long. Kadeer said, “I do not believe Uyghur will have any basic human rights under the CCP regime at all.”

This month Kadeer is presenting to the Canadian congress at their Human Rights hearing the Uyghur people's wish and right for autonomy to be recognized and implemented with the help of the international community. Uyghur people will then be allowed to have their own culture and education; all innocent Uyghur political prisoners will be released. Through her presentation Kadeer hopes that Canada will better understand the true nature of the CCP regime and will better understand the long human rights suppression of Uyghur people in their own homeland.