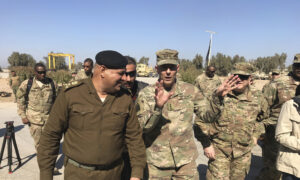 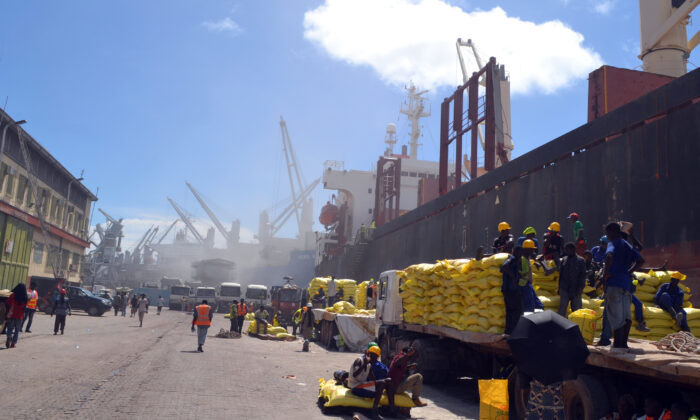 The harbor of Conakry, the capital and largest city of Guinea, on Sept. 24, 2013. (Cellou Binani/AFP/Getty Images)
China Business & Economy

A recent military coup in West Africa has put the Republic of Guinea in the world’s spotlight. While this small country ranks among the world’s poorest, its abundant mineral wealth, including bauxite and iron ore, make it strategically important to the Chinese Communist Party (CCP).

Guinea is only 94,981 square miles in size and is home to a scant 12.7 million people. Located in the southeastern portion of this country is the gigantic untapped Simandou mine. A 2019 report by Winning Shipping of Singapore states this mine holds over 2.6 billion tons of superior-grade iron ore (more than 60 percent Fe content) that is shallow and easily accessible but remains untouched.

By comparison, China is ranked fourth in the world for its 20 billion tons of iron ore, but unlike Guinea, 98 percent of China’s iron ore is graded as poor quality (35 percent Fe content) and buried deep making it difficult to access. For this reason, China has become the world’s top importer of iron ore since 2003. Eighty percent of the imports are being supplied by four major mining companies including Australian companies BHP Billiton, Rio Tinto, and FMG (Fortescue Metals Group); and Vale of Brazil.

Since April last year, the CCP has placed restrictions on imports of agricultural and livestock products from Australia in retaliation for their investigations into China’s role in developing the CCP virus, which causes the disease COVID-19. To reduce dependence on Australia’s iron ore, the CCP began targeting the Simandou mine.

Although rights to mine Simandou’s iron ore have exchanged hands several times since 2003, none of the previous owners took action to extract the mineral substance. Rights to the sprawling property were divided into four large producer mines. Two in the north end of Simandou and two in the south.

Rights to the south-end mines were once wholly owned by Rio Tinto. It now holds 45.05 percent of the venture after allocating 39.95 percent in 2016 to a Chinese consortium led by the Aluminum Corporation of China (Chalco). The government of Guinea holds the remaining 15 percent.

Twenty-five-year mining rights to the two north-end mines were acquired in June of 2020 for $14 billion by the producer SMB-Winning, a consortium formed by Chinese entities and Singapore’s Winning Shipping. In September of this year, the consortium’s work was interrupted by a military coup and the arrest of Guinea’s pro-China president, Alpha Condé.

Condé was first elected president in 2010. He subsequently sparked criticism and protests in Guinea by modifying the constitution so he could extend his third term in office. Within days of the coup, AFP News released a video showing the 83-year-old Condé being guarded by Guinean special forces. The coup’s leader, Lieutenant-Colonel Mamady Doumbouya, said Condé had mismanaged the country, and despite Guinea’s vast mineral wealth, the people are still living in poverty due to Condé’s corruption.

Condé’s relationship with Beijing has remained close throughout his tenure. He traveled to China on multiple occasions and actively participated in the CCP’s controversial Belt and Road Initiative. It was during Condé’s tenure that Simandou’s two north-end mining rights were withdrawn from the Israeli company BSGR, which was under investigation, and finally won by the Chinese consortium, SMB-Winning.

Simandou Is No Substitute for Australian Iron Ore

Consistent with the move to restrict Australian imports, the CCP state-run media has promoted the notion that China is no longer dependent on Australia’s iron ore. But the facts suggest that the Simandou mine does not compare to Australia’s iron ore mines in terms of total iron ore reserves and annual production.

A map produced by the U.S. Geological Survey (USGS) confirmed that in 2020 Australia had the world’s largest reserves of iron ore. Its 50 billion tons is 10 times more than Simandou’s potential, which is hardly sufficient to meet China’s needs.

China has imported more than 1 billion tons of iron ore each year since 2016. This figure rose to 1.17 billion tons in 2020. Brazil supplied 21.1 percent, while Australia supplied 66.3 percent or approximately 776 million tons. The production of 100 million tons annually by Simandou’s two northern mines falls far short of what China needs and would only marginally reduce imports of Australian iron ore.

Simandou’s insufficient production of iron ore is not the only risk China faces. A study published in 2020 by Chinese academics examined whether operating in Guinea could jeopardize SMB-Winning’s ability to repay its hefty five-year loan for mining rights. The study projected the cost per ton for production, investment amortization, and freight could reach a little more than $70 per ton and may reduce the profit potential. This is assured if China’s demand for iron ore weakens or if mining companies join forces to reduce their asking price per ton.

The study suggested China’s demand for steel from iron ore may weaken on a small scale within 5 years, and a much larger scale within 10 years. This would be caused by China nearing the completion of major construction and infrastructure projects, in which case, the price of iron ore on the international market is likely to drop.

Yet, another risk China faces is Guinea’s excessive operating fees and cumulative 66 percent tax rate for businesses. This is double the tax rate paid to Australia by Rio Tinto in 2019 (39.3 percent) and to Brazil by Vale in 2018 (32.3 percent).

Finally, there are the political risks to China posed by Guinea’s current military dictatorship, as well as environmental issues and labor disputes that could jeopardize mining rights if left unresolved.

Although the military junta in Guinea promised to establish a “government of national unity,” lead the transition to civilian rule, and “honor all mining contracts,” it raised suspicions on Sept. 9 by freezing government-related bank accounts. A spokesperson said this action was necessary to “protect state assets.”