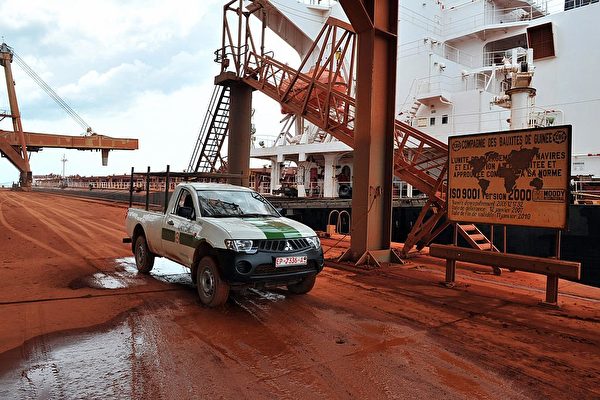 A bauxite plant in Guinea. During the presidency of Guinean president Alpha Conde, China's bauxite imports from Guinea expanded from negligible to more than half. (File photo/Georges Gobet/AFP via Getty Images)
International Relations

In addition to its rich reserves of iron ore, the Republic of Guinea also holds 7.4 billion metric tons (pdf) or one-fourth of the world’s total reserves of bauxite, the main source of aluminum. Data provided by Western Securities show that in 2020, Guinea exported 82 million metric tons of this important mineral, of which 64 percent was sent to China. To say that Guinea is strategically important to the Chinese Communist Party’s (CCP) “One Belt, One Road” initiative is an understatement.

China’s share of global aluminum production rose to 57.2 percent during 2020, a historic high, of which 94 percent is used domestically. The production relies on the coal-fired process of electrolysis to extract aluminum from the bauxite.

China’s limited reserves of bauxite total only 830 metric tons, which is insufficient to meet its production demands. To address this shortage, China was previously relying on bauxite imports from Australia, Malaysia, and Indonesia. This changed after bauxite exports were disallowed from Indonesia, and China began importing from Guinea’s vast mineral reserves.

This dramatic change took place during the presidency of Alpha Condé. He visited Beijing in his second year in office (2011) and then actively participated in the communist regime’s “One Belt, One Road” initiatives, which also brought Chinese companies to Guinea.

The consortium sent its first exploration team to Guinea in August of 2014. Its mission was to evaluate the mining potential within 541 square miles on both sides of the Nunez River. Three months later, the consortium obtained prospecting rights. Then after obtaining a mining license in July 2015, the consortium began exporting bauxite to the port of Yantai in Shandong Province, China in Sept. 2015.

Electrical power for Guinea’s mining operations is being provided by two local hydropower plants that were recently built on behalf of Guinea by China Three-Gorges Group. These include the Kaleta and Souapiti Hydropower stations. Both were “One Belt, One Road” projects costing a combined $1.8 billion, a sum that exceeds Guinea’s annual revenues.

In 2016, Xi Jinping, the CCP’s leader, informed Guinea’s visiting president Condé that the Party would cooperate in developing his country’s infrastructure and mineral production capacity. These talks culminated in September of 2017 when both parties signed the Framework Agreement on Cooperation in Resources and Loans between China and Guinea.

The agreement, according to the Belt and Road China-Africa Think Tank, calls for the CCP to provide $20 billion in loans to Guinea over 20 years in exchange for bauxite mining rights. The loan secures three projects in the small town of Boffa in northwest Guinea. These include an alumina refinery planned by China Power Investment Corporation, a bauxite project by Aluminum Corporation of China (Chalco), and another bauxite project by China Henan International Cooperation Group (CHICO).

Guinea’s Minister of Mines and Geology, Abdoulaye Magassouba, referred to these three projects as primary in Phase 1, as these entities generate revenues to repay the loan. Guinea will use the loan for much-needed infrastructure projects. The construction of streets in Guinea’s capital city, a highway to the port of Conakry, a power transmission line, and a new university.

During a press conference broadcast on Sept. 16, 2017, Condé was questioned about his loan agreement with the CCP. The media raised two claims that Condé attempted to refute. First, there was no guarantee that Guinea’s citizens would be provided jobs since the mineral development companies did not use native Guineans. Second, Guinea’s mineral rights were forfeited to China in exchange for $20 billion.

Condé defended his decisions by explaining the agreement was not just about the $20 billion. He said “it’s about two things, which involve related projects, and repayment matters, which means the more projects we propose, the more loans we get, and the more Chinese companies that repay the loans, the more loan concessions we enjoy.”

After the Condé loan deal was finalized, China’s state-run aluminum producer Chalco, decided to accelerate its development of mining operations in Guinea’s Boffa region. Construction began in earnest in October of 2018. Chalco’s first shipment of bauxite arrived in China in February of 2020.

Chalco’s phase one investment of $585 million is expected to yield 12 million metric tons of high-quality bauxite annually. Total reserves in the region are estimated at 1.75 billion metric tons and operations should last for up to 60 years making the Chalco project China’s largest in Guinea.

In a reference to information obtained from the Chinese state-owned newspaper, China Nonferrous Metals News, the BBC reported that as of December 2020, 14 Chinese companies had entered Guinea to mine or negotiate bauxite development, which is twice the total number of companies from other countries (about 7).

Despite the continuing investments into Guinea, it is still one of the poorest countries in the world. The military justified its recent takeover of the government by claiming former president Condé had engaged in corruption that left the people in poverty. Following the coup, many of Guinea’s citizens were reported to be celebrating in the streets.

According to The Wall Street Journal, Guinea is now supplying over half of China’s bauxite. Unless resolved, political instability in the region could disrupt China’s import plans. In the event this happens, Australia may benefit since it is the world’s second-largest exporter of bauxite.

Read part 1 of this article here.